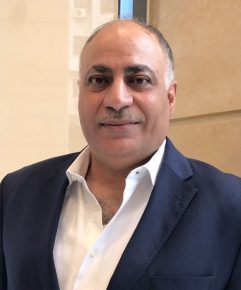 Saad Hattar is a Jordanian career journalist and media trainer, with more than 30 years of experience in prints and radio journalism throughout the Arab World. An expert on investigative journalism, he worked as head of the Investigative Journalism Unit at ARIJ, (Arab Reporters for Investigative Journalism) from 2009 until mid-2015.
He has been in the training field since 2004, having enrolled in five TOT workshops in Cairo, Beirut, Amman and Berlin.
Hattar had worked as a stringer for the Time Magazines and BBC World Service. As BBC correspondent in Jordan (1999-2010), he headed the Baghdad office sporadically in 2003 and 2004, during and in the wake of the war on Iraq. Hattar has covered wars, riots and elections in Iraq, Yemen, Gaza, the West Bank and Syria. He had served as Jordan-based correspondent (1988-1999) for Agence France Press.
A former assistant editor-in-chief at Al-Ghad, Jordan’s latest newcomer to the newsstands in 2004, Hattar had also served as editorial advisor for the local mass-circulation Arabic newspaper, Al Rai. A civil engineer by education, Mr. Hattar stringed in 1990’s for various Arab and international media, before taking on a full-time job with the BBC. He started his career at The Jordan Times in 1985.  A certified trainer/ expert for several world organizations notably Thompson-Reuters foundation, Hattar has taken part in five TOT workshops over the past 15 years.