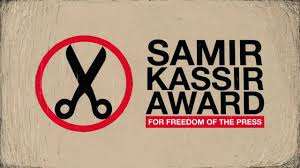 The power of people to make a difference

Samir Kassir Award for Freedom of the Press

This year marks the 10th edition of the “Samir Kassir Award for Freedom of the Press” – a milestone of European Union support to freedom of expression in Lebanon, the Middle East, North Africa and the Gulf.

More than ever, the 2015 Award will carry the torch for independent and informed journalism. It is a tribute to Samir Kassir who, even 10 years after his voice was silenced, still inspires journalists. Journalists who are determined, despite increasing risks, to continue to report in the name of freedom of speech, professional journalism and independent media, whether through the new tools of the digital age or through traditional media.

Join this 10th edition of the “Samir Kassir Award for Freedom of the Press” by submitting your inspiring and engaging articles, reports and images. Good luck to all participants!

Ambassador – Head of the Delegation of the European Union to Lebanon

Candidates must submit an opinion article, an investigative article, or an audiovisual report centered around one or more of the following topics: rule of law, human rights, good governance, fight against corruption, freedom of expression, democratic development, or citizen participation.

The article must have been published in a print or online media outlet in one of the countries listed above or in one of the European Union Member States (Austria, Belgium, Bulgaria, Croatia, Cyprus, Czech Republic, Denmark, Estonia, Finland, France, Germany, Greece, Hungary, Ireland, Italy, Latvia, Lithuania, Luxembourg, Malta, Netherlands Poland, Portugal, Romania, Slovak Republic, Slovenia, Spain, Sweden, and United Kingdom). The article must not exceed 25,000 characters and must have been published between March 15, 2014 and March 15, 2015.

The winner in each of the three categories will be awarded €10 000.

The European Union holds the right to reproduce and publish the awarded articles and air the awarded audiovisual report in its own non-commercial publications and websites as well as in any other print or online publications related to the “Samir Kassir Award for Freedom of the Press”.

The selection will be done by a jury composed of journalists and media professionals coming from EU Member States and the participating countries listed above.

Members of the jury, staff of the European Union, and staff and members of the Samir Kassir Foundation are excluded from the contest.

Each candidate is to submit a file containing the following information:

2- The entire published article in its original form as well as a copy translated into English.

Three awards will be granted for:

Completed applications with all submission materials must be sent by April 10, 2015 at the latest:

– By email (in Word format for articles or WMV or MP4 format for videos) to the following address:coordination@prixsamirkassir.org

– By postal mail (in hard copy or CD-ROM or DVD) in an envelope addressed as follows:

Incomplete or unsigned files will not be accepted.