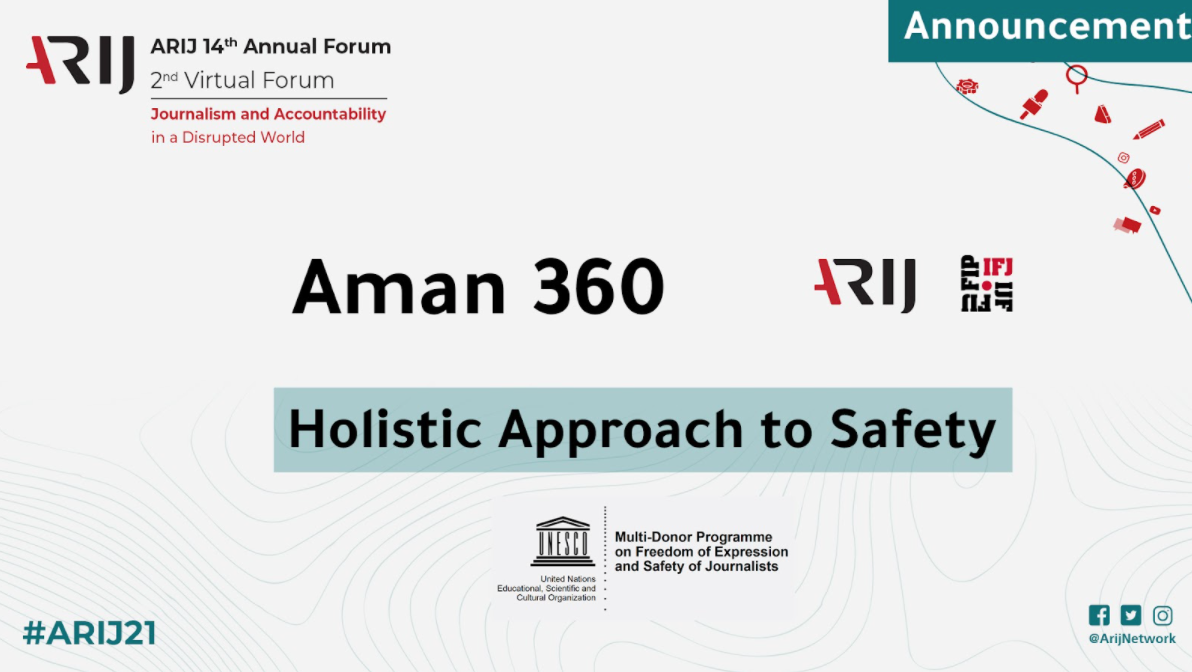 ARIJ and UNESCO launch Aman360: A New Holistic Project to Safety and Security

Xx Jan 2022 – “Aman360” is a new project for the safety of investigative journalists in MENA. The project is a partnership between UNESCO and ARIJ, with funding through UNESCO’s Multi Donor Program on Freedom of Expression and Safety of Journalists (MDP) and as part of a project titled: “Enhancing the Safety of Journalists in Africa and the Arab Region” funded by Denmark. The project is to be implemented in cooperation with IFJ.

On average, every five days a journalist is killed for bringing information to the public.

Promoting the safety of journalists and combating impunity for those who attack them are central within UNESCO’s support for press freedom on all media platforms. And is a top priority to ARIJ and IFJ.

The “Aman360” project aims to create and nurture a cognizant foundation for the safety of journalists among the investigative journalism community in the Arab world to ensure that free press remains as a powerful medium, and the journalists can continue to play their role as watchdogs of justice and in holding those responsible accountable.

This project offers a new holistic and innovative approach to enhance the safety and resilience of Arab investigative journalists, media partners and organisations and other relevant stakeholders in the MENA region with focus on Algeria, Iraq, Mauritania, Palestine, Tunis, and Yemen.

Aman360 was built on the rising need for skills and knowledge to undertake risk assessments, precautionary actions and preventive measures in addition to mitigation planning to foster a safe-media environment. During the last 15 years, IFJ considered the MENA  region 10 times as most dangerous in the world for journalists’ safety, due to the number of journalists killed, injured and or forced to flee their homes and countries. The region is also considered to be among the worst in providing legal and regulatory guarantees for independent journalism to be able to flourish. Journalists and media face prosecution, jailing, closure, blocking or starvation of the local market because of their critical reporting. The Covid 19 pandemic exacerbated the crises facing journalists and the media globally and especially in the region.

ARIJ and IFJ have jointly initiated the first step to foster a safe-media environment through launching a comprehensive self-paced course in the Arabic language on Safety training on March 5, 2021 by Safety trainer Abduallah Maksour, on ARIJ Academy which tackled new challenges within the pandemic fieldwork. Eleven sessions were provided on the principles of journalistic professional safety and the procedures that journalists should follow before, during and after their assignments. It covered skills on pre-assignment planning, measuring risks and coping mechanisms, assignment location selection, communication with media institutions, dealing with checkpoints, dealing with kidnapping and its stages, covering demonstrations and gatherings, in addition to mobility skills in conflict areas. The self-paced course became a prerequisite starting March 2021 to all Arab investigative journalists wishing to work with ARIJ with a certificate provided upon completion of the course. Since its launch, a total of 400+ journalists have studied the course.

As the mandated agency within the UN that promotes freedom of expression and of the press, UNESCO has taken the lead in coordinating the development and implementation of the UN Plan of Action on the Safety of Journalists and the Issue of Impunity, working closely together with other stakeholders including Member States, UN agencies, NGOs, academia, and media practitioners. In the past years, UNESCO has produced a number of resources to strengthen the safety of journalists including most recently a MOOC developed in cooperation with the International Women’s Media Foundation and the Knight Centre at Texas University titled “How to report safely: Strategies for women journalists and their allies”, in addition to webinars and briefs on specific threats facing journalists, from demonstrations, to pandemics- including Covid-19, to coverage of elections, and others. The organisation has also worked with other groups responsible for providing a safer environment for journalists, including security officers, judges and prosecutors, through advocacy and capacity building. All the available material and resources can be accessed here.