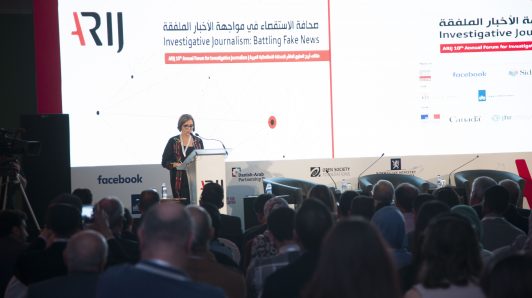 The Dead Sea, Jordan, Dec. 3 – Journalists from Egypt, Yemen and Jordan who exposed human rights abuse and state-run mass surveillance in those countries took top prizes for best investigation in print, film, and multimedia in 2017 from Arab Reporters for Investigative Journalism (ARIJ).

The winners were announced at a gala dinner Sunday concluding the 10th Forum for Arab Investigative Journalists organized by ARIJ.

This is the first year ARIJ opened its competition to all investigative journalists in the Middle East and North Africa, not only those whose in-depth reports came after training and funding from ARIJ.

“This reveals the confidence ARIJ has in the international standards ARIJEANS have reached, and is a serious attempt to raise the bar higher in the next decade so that Arab journalists working on low-budget investigations can strive for big stories that compete with higher budget investigations by more experienced investigative journalists”, said Jordan’s Rawan Damen, award-winning journalist and media executive, who headed the four committees judging the 2017 ARIJ Prizes.

BBC Arabic’s Nawal Al-Maghafi, a Yemeni/British national, won honors for best long-form investigation for “Weapons of Mass Surveillance”  in which she documented how governments in Algeria, Morocco, and the United Arab Emirates use high-tech mass surveillance to monitor citizens. Western companies, including Britain’s largest weapons manufacturer, BAE, are among those selling surveillance technology to these governments. Human rights organizations question whether a British company ought to be selling such equipment, much of it classified, to repressive regimes.

Mohammad Abu Deif from Egypt won best prize for short-film. In his investigation “Return Licensing” he documented the process of forging ownership papers and chassis numbers of Libyan cars and then turning them into Egyptian vehicles. He showed smugglers and car merchants dealing in scrap cars colluding with mechanics and officials, to finalize the process and sell dangerous vehicles to Egyptians.

The best prize in print was shared by two investigations: “Loopholes in Egyptian and Greek Airports” and “Marital Rape.”

Loopholes had to be published under alias bylines and shows how traffickers exploiting a lack of electronic surveillance — including eye and fingerprint scans  — at Egyptian and Greek airports to smuggle out people. In the rape investigation, Aya Nabil showed how Egyptian women cannot ask for divorce on the basis of marital rape because courts do not acknowledge such a complaint. Instead they must ask for “khulu”, a divorce that deprives them of all rights.

Best prize for multimedia was shared by Dana Jibril from 7iber.com for her investigation “After Deportation” and by a team of five Associated Press reporters led by Maggie Michael and including Yemeni journalists Maad Al-Zikry and Ahmed Al-Haj who went “Inside Yemen’s Secret Prisons.”

Jibril examined the mass deportation in December 2015 of 800 Sudanese who had sought refuge in Jordan as a way to boost their chances of being transferred to Europe.

The AP team documented how nearly 2,000 Yemeni detainees were beaten with wires, kept in filthy shipping containers, and blindfolded for months by an American counterterrorism ally. The search for Al-Qadea militants has led to a network of secret prisons run by the United Arab Emirates and Yemen.

The Jury committee awarded Egypt’s Aisha Al-Gayyar from Kuwait’s AlQabas newspaper, a certificate of appreciation for her investigation “Adulterated Education”. Gayyar documented how eight student services centers violated their licensing terms by selling research papers to students, all of which escaped the weak oversight by the Ministry of Trade and Industry.
Damen said ARIJ received 99 applications of which 27 from10 states — Yemen, Egypt, Iraq, Lebanon, Tunis, Palestine, Bahrain, Kuwait, Jordan, and the UK – were shortlisted.

She said the juries were impressed by the risks Arab journalists took to tell their investigations in a place becoming more and more dangerous and passing through wars and unrest”.

She added: “The investigations we reviewed exposed truth surrounded by silence. All of them served the public interest by uncovering malfeasance, wrongdoing and abuses of power. The juries admired the persistence of the journalists IN delving beneath the surface”.

Amman-based ARIJ is the region’s only network promoting a culture of investigative reporting in Arab newsrooms and it has been doing so since 2005.