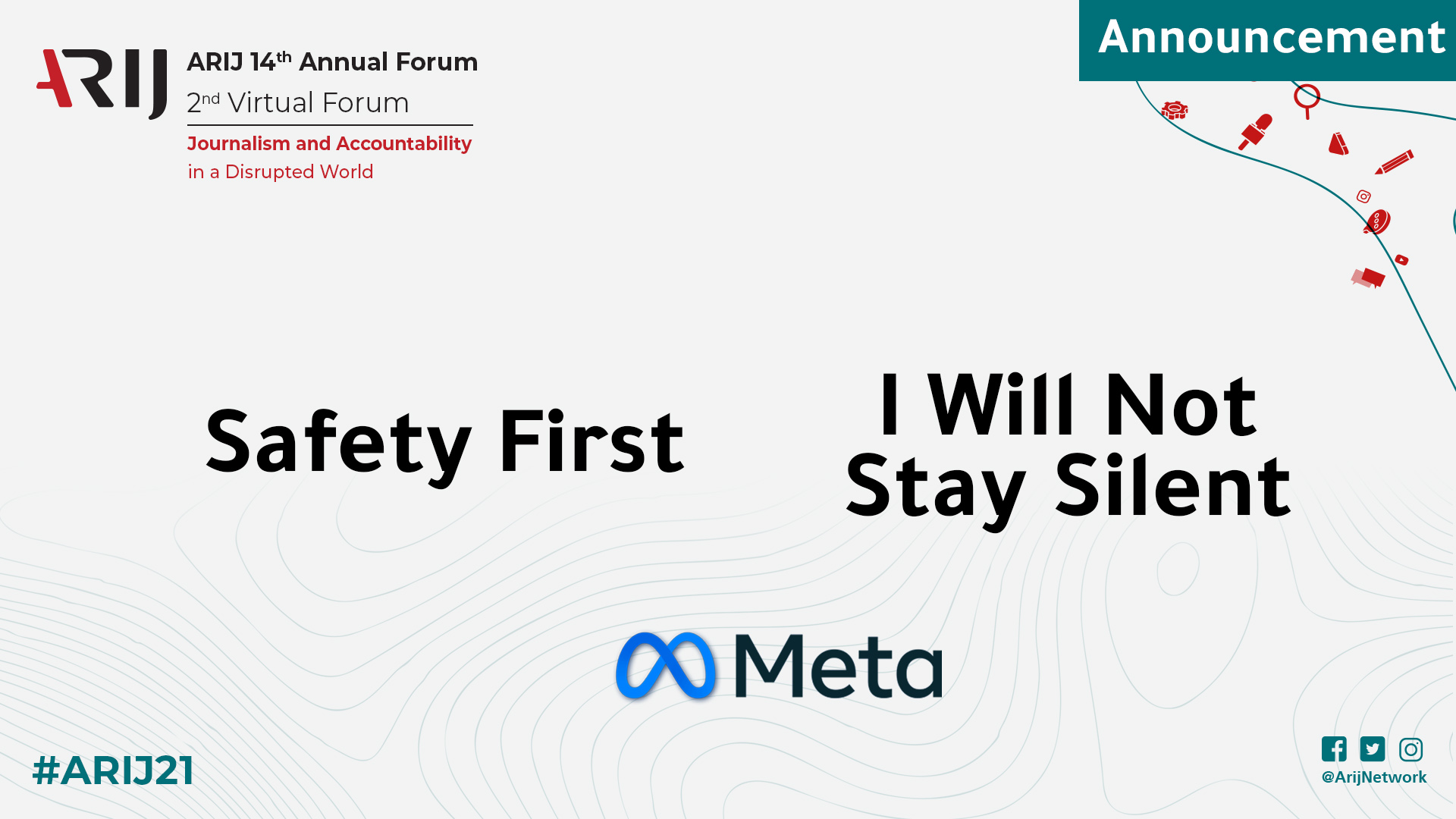 At ARIJ 2021, Meta announced the second year of the “I Will Not Stay Silent (IWNSS), #SafetyFirst training project as well as global expansion of Facebook Protect

Amman, Jordan, 03 December 2021: As part of its participation at the ARIJ (Arab Reporters for Investigative Journalism) 14th annual forum (2nd virtual) that kicked off today in Jordan, Meta highlighted its commitment to journalist training and online safety by making a number of key announcements. As part of the forum and further strengthening its partnership with ARIJ, Meta also took part in a 90 min panel discussion titled ‘The Battle Against Disinformation in the Arab World’.

At ARIJ 2021, Meta announced the second year of the “I Will Not Stay Silent (IWNSS)” Project. The project initiated by ARIJ, the leading investigative journalism training center in the region, was implemented this year in 2021 with a consortium of four partners: Meta Journalism Project, IWMF, WAN IFRA/WIN and IREX in addition to support from the German Federal Foreign Office. It aims at providing the journalistic community, especially women journalists with effective tools to express themselves, document harassment and abuse, raise their voice and hold those responsible accountable. So far, the project has conducted 13 webinars, a 4-month in-depth diploma programme as well as hosted over 200 sessions of one-to-one psycho-social support and as well digital clinics. Through Facebook alone, the webinar series reached more than 1.4 million participants, and the engagement through the live streaming was about 2.000 people.

In 2022, building on the impact of the first year of IWNSS, the project will continue to provide the journalistic community, and women in particular, with effective tools to express themselves, document harassment and abuse, raise their voice and hold those responsible accountable.

In addition to the IWNSS project, Meta also announced #SafetyFirst, a new training project  in partnership with ARIJ to train journalists on digital security and safety. This project aims at increasing the awareness, knowledge, skills and safety nest for all journalists in the region, within newsrooms and/or freelancers in three-folds; training, awareness, individualized skills and continuous support.

Mohamed Omar, News Partnerships Manager, Middle East and North Africa at Meta said: “Digital threats have increasingly become a major risk factor for journalists in the region and world wide. Attacks such as online bullying, doxxing, threats and sexual harassment are serious problems that have only become more prominent and coordinated in recent years. It is therefore important to educate the Arab journalist community by providing them with all the knowledge, skills and tools they need to mitigate any risks that might come their way and stay safe online.”

Rawan Damen, director-general of ARIJ, said: “In our 2022 – 2024 Strategy, we are setting a new, comprehensive methodology of safety for our Arab journalists by expanding our support for them to encompass five pillars of safety: physical, digital, psychological, legal and professional. This is why “IWNSS” continuation – while focusing on the psychological and digital aspects – is essential. This “SafetyFirst” training project is vital to our community and we are very glad of our ongoing partnership with Meta.”

On the sidelines of ARIJ, Meta also announced the global expansion of Facebook Protect, a security program that helps secure people who might be at a higher risk of being targeted online for account compromise. These groups include human rights defenders, journalists and elected officials. Originally piloted in the US in 2019, Meta will now be expanding Facebook Protect to more countries around the world. People who may be eligible for Facebook Protect will see prompts on Facebook to learn about the program and enroll. Facebook Protect helps high-target accounts adopt stronger account security protections by simplifying security features like two-factor authentication. It also provides additional security protections for people’s accounts and Pages, including monitoring for potential hacking threats.

“We take journalists’ safety very seriously at Meta and helping journalists navigate, understand and remain secure on digital platforms is of crucial importance to us. With the second edition of the IWNSS project,  launch of the #SafetyFirst project and Facebook Protect, we are reinstating our commitment to journalists,” added Mohamed Omar.

To know more about the Meta Journalism Project, visit  https://www.facebook.com/journalismproject