Abandoned in their Mothers’ Homes


Children of Yazidi women born in captivity to ISIS face a shameful past, homeless present and unsure future. By Abdul Rashid Al Saleh

“It is impossible for a mother to give up her child, even if it has been conceived with her enemy,” says Sama who left her daughter Khadija* in the Syrian city of Raqqa when the Kurdish Workers’ Party helped her flee to Iraq.

“I was bought and sold three times,” she says, brokered on the Islamic State of Iraq and Syria (ISIS) exchange in Raqqa from 2014 to 2017. Her three “owners” sexually assaulted her from the time she was 17. For two years, she was held by Abu Hafs, a 40-year-old Egyptian, and in 2015 she gave birth. “I do not know her father,” she says.

“I thought about my family and how they would face the people of my area (Khansour Complex – North of Mount Sinjar), if I came back with my daughter whom I conceived with my enemy,” she says weeping.

Sama is one of 100 Yazidis who were subjected to sexual slavery and systematic rape during those years. This investigation documents the suffering of seven freed women and their children conceived with ISIS members.

Most children born to enslaved women- between the age of weaning and a little over – either were left in ISIS territories abandoned or killed along with their mothers trying to escape during fighting with ISIS. Those reunited with their mothers now face social isolation and they have been deprived of identity papers, in breach of the Constitution and the Iraqi Nationality Law.

Thirteen Yazidi women returned home pregnant. Their fate is unknown. After being raped, they refused abortions. These children remain lost between helpless mothers and unknown fathers. Their communities refuse to accept them and the Ministry of Interior is reluctant to grant them identification documents.

The Director of Primary Education at the Ministry of Education, Shahrazad Mustafa, said the ministry has been working with the Ministry of Interior to better document of these children. They are being referred to committees within the Ministry of Health for assessment. But she said that officials have been unable to document any cases of descent because of the difference between the mother’s and the father’s sect and the rejection of the children by the Yazidi community. So far, no children from Yazidi mothers and  ISIS’ fathers have come into the school system because they are under 6.

“Yazidism is strictly endogamous,” that is, closed, according to Sherwan Ismail, head of the Yazidi Waqf in Iraq. You become a Yazidi by being born to a Yazidi mother and a Yazidi father only. Ismail calls for the inclusion of these children under the Islamic religion, considering that their fathers are Muslim.

Sama* lives with her three sisters: Nahla*, 25, Zubaida*, 23, and Abeer*, 27 plus her father Salem Dalkani*, in a small tent  in the Essien Camp in Dohuk governorate). The father explains that “similarly to Sama’s* case, his three daughters gave birth to children after they being raped by ISIS. The children were then left at ISIS controlled territories.”

“We, as a Yazidi community, do not accept a child who is an ISIS offspring, or even any child outside of our Yazidi religion. We do not accept strangers. Our religion is not missionary or advocacy.” Dalakani said ISIS abducted 71 people from his family, with the fate of 41 still unknown.

After ISIS invaded the cities in northern Iraq, 260,000 Yazidis were displaced and scattered across Iraq, including the Kurdistan Region. Some 100,000 of a total population of 550,000 Yazidi  migrated, according to the census of the General Directorate of Yazidi Affairs Ministry of Awqaf Government of Kurdistan .

No official census has been taken of ISIS children from Yazidi mothers. But estimates by the governorate of Baghdad, the Ministry of Labor and Social Affairs, and the High Commission for Human Rights in Iraq correspond to the placement of 80 children in care homes. Four of these were accompanied by their mothers, who refused to abandon them in exchange for reintegration into the Yazidi community.

Simultaneously, Iraqi authorities since the takeover of Mosul and surroundings have been detaining foreign mothers and their children born of ISIS-connected fathers.

This investigator examined correspondence in which the Iraqi Reform Department’s Maximum Protection Unit asked the governate of Baghdad to transfer 60 children with foreign mothers and ISIS fathers from three prisons into care homes in the governate of Baghdad. The correspondence does not mention names. The transfers were completed. (A children’s documentation framework and the decision/letter of the Public Prosecution)

The Yazidi Waqf office classifies these children into three categories, the largest of which is those abandoned by their mothers in areas controlled by ISIS. Next are children who were killed during fighting, and the third category is children with their mothers transferred to care homes because their mothers were unwilling to abandon them to be reintegrated into the Yazidi community.

The number of women from ISIS is 2,141 including 976 minors. This number represents 60 percent of the 3,548 women who were kidnapped and did not return, according to the Department of Yazidi Affairs of the Waqf of the Christian, Yazidi, Sabian, and Mandaean Religions Divan.

Ismail admits that religious organizations have not come up with a way to deal with these children and the government does not want to be involved in this religious issue.

A source in the Interior Ministry put it this way, “The government is not able to treat the files of these children given the sensitivity and complexity of the files in terms of security and ideology for the Yazidis themselves.”

The source said this is why the ministry is unable to register these children and give them identification documents such as birth certificates.

The Director of the Department of Affairs at the General Directorate of Citizenship, Gen. Kamal Abdul Amir confirmed this in a telephone conversation March 23 of last year.

Lawyer Amir al-Da’idi says the Constitution and the Iraqi Nationality Law contradicts what the ministry source said. “The official’s statement contradicts Article 18 of the Iraqi Constitution: First: Iraqi nationality is the right of every Iraqi, and is the basis of his/her citizenship; Second: – An Iraqi is a person born to an Iraqi father or an Iraqi mother, as reinforced by the legislation.

Al-Da’idi stressed the possibility of “registering the children as Iraqis in their birth certificates provided that their mothers are Iraqi and this is in accordance with the Iraqi Constitution.”


He also refers to Article 19 of the Law on Births and Deaths No. 148 of 1971, which provides for “the registration of children including those out of wedlock”, after they obtain a family status by the court.

He said the state’s failure to recognize these children violates the provisions of Article 3 of the Iraqi Nationality Law No. 26 of 2006.

Suhaila was 14 when she was abducted by ISIS in the Sinjar Mountains three years ago. She said, “The women were isolated from the men and transferred at 4 a.m. to (Sinjar District); a government building related to the government of Baghdad.” The women were then transferred to a “building controlled by ISIS called Kolksey Hall, where there was an auction for the sale of Yazidi women.”

She said eight ISIS members sexually assaulted her for  three years from the day she was taken until she was released two years ago. “I was sold and bought in the market among those eight members of ISIS,” she says, swallowing back tears.

She had children by the last member who bought her, whom she identified as Abu Taybeh, an Iraqi national, who married under the laws of his religion, Islam. He had a marriage contract drafted at the organization’s court in the city of Mosul.

The High Commissioner for Human Rights in Iraq, Bushra al-Obeidi says that the Iraqi Council of Ministers formed a committee three years ago in the Department of Citizens Affairs and Public Relations of the Council of Ministers, to develop plans for the psychological and physical rehabilitation of Yazidi women survivors.


However, Obeidi said, the plan died before helping the “righteous” women, as they were forced to have children in brutal conditions. The plan, which was approved and included in the priorities of the Department of Women’s Empowerment in the Secretariat of the Council of Ministers, includes the issue of obtaining official documents for the children, he said.

“We lived under the ISIS regime in poor conditions because of the lack of food. We were not able to breastfeed our children,” Faiza said.

Farah said  her captor married her when she was a minor and she had child with him, although he is married to a foreigner and has five children already.

“I was conflicted,” she said. “ I regret leaving my child with my enemy, despite my longing for her, or should I bring her with me to Iraq and live in a care home?” Farah* spoke with this investigator Feb. 10 at “Kendala” camp, five kilometers from the Syrian border.

Riyadh al-Adadh, head of the Baghdad Provincial Council, says the Iraqi government cannot fully care for all the children in need much less including provide those born to Yazidi mothers captured and impregnated by ISIS. Al-Adadh said the internal infrastructure is worn out and aged and cannot accommodate large numbers. He said the children have been living at care homes for two years now. He would not name them but he said each care home has a capacity of 25 children only.

“Yazidi women have willingly given their children to agencies, such as care homes, thinking they will be able to maintain the children. There are freed pregnant women (13 women), seven of whom have decided against abortion and are receiving assistance from the Yazidi Aid Organization, to protect the fetus until birth. Following the birth of their children these women will decide on whether to keep them. Six opted for abortion, as documented by the Yazidi Organization for Yazidi Relief. This statement is in accordance to Hussam Abdullah, director of the Organization for Yazidi Relief.

Preparations without a Solution

The head of the Child Welfare Authority part of the Ministry of Labor and Social Affairs, Abeer Chalabi, said in a statement published on the ministry’s website that she is working with the National Security Service to care for displaced children and parents in care homes in Mosul. According to Chalabi, the ministry and United Nations International Children’s Emergency Fund (UNICEF) have agreed to rehabilitate care home buildings in Mosul.

Article 30 of the Constitution and Personal Status Law No. 188 of 1959 stipulates the right of all children of Iraq to a safe environment and supporting identification documents. However, the children with ISIS fathers face future displacement and illiteracy, amid the absence of solutions.

This investigation was carried out with the support of the Arab Reporters for Investigative Journalism (ARIJ) and under the supervision of editing coach Saada Abdulkader. 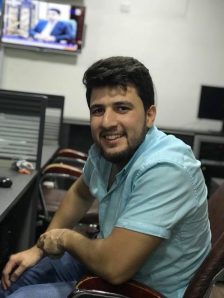