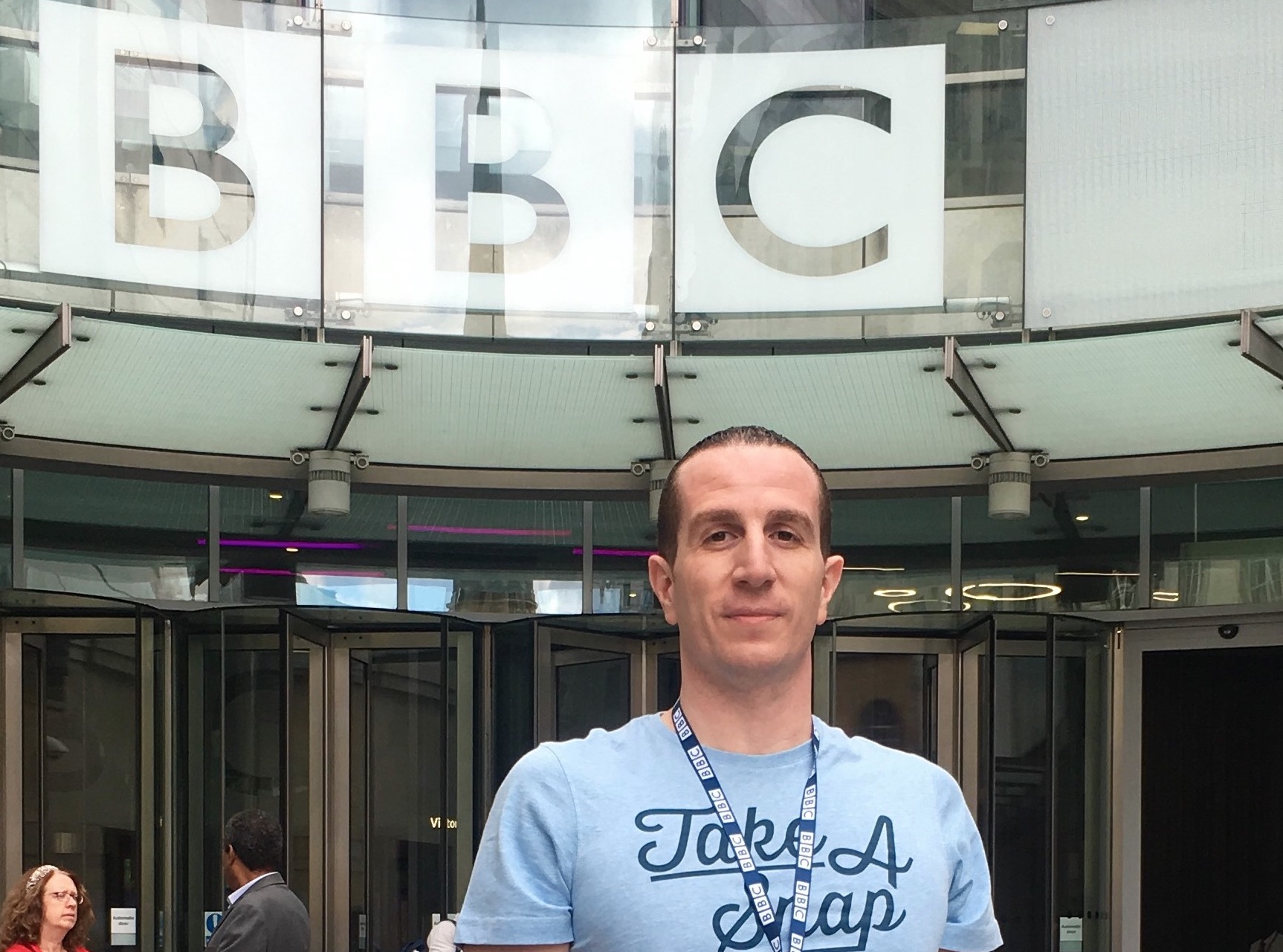 ElShamy: Goal Setting and Preparation got me to the BBC

Ahmad ElShamy, 42, is an ARIJean rising star whose breakthrough into the heart of international journalism came shortly after working closely with ARIJ for over half a decade. The Egyptian journalist claimed several international awards in investigative journalism and a fellowship in New Media from the United States, and as of recently, has joined the BBC Arabic Documentaries team as a Senior Investigative Journalist.

ElShamy worked as a trainer and supervisor in the field of investigative journalism on the project “Syria in Depth”, in cooperation with ARIJ, the Guardian and International Media Support (IMS) to train Syrian journalists in TV, written and multimedia investigative reports.

——————
Tell us about your experience with ARIJ and how you found it?

In the first phase I worked as a journalist in the field of investigative reporting, during which I learned many important practical skills and tools for my line of work, such as tracking money and corruption, filming with different types of cameras, writing and directing, and presenting investigations through visual storytelling. I also produced numerous written, television and multimedia investigations and received numerous international awards.

The second phase was different as I worked as a trainer and supervisor on the development and production of TV and multimedia investigations during the project “Syria in Depth”, in cooperation with The Guardian and Denmark’s IMS, for over a-year-and-a-half. During this period, we trained several Syrian journalists on investigative journalism and assisted in developing their proposed ideas. We covered filming, production and the publishing stage. A number of these investigations also won international awards.

For me, ARIJ is my home, my family and my constant supporter in all stages of my work.

What are the main skills that you took to the BBC?

Firstly, setting short and long-term goals, constantly developing them and then pursuing even bigger goals.

Secondly, evaluating all steps, learning from mistakes and constantly developing skills and tools to keep up with technological development and its impact on investigative journalism.

Thirdly, developing the art of dealing with the work-team, supervision and guidance.

How do you view working in the Arab region under your new position as Chief Investigative Journalist in the BBC’s Arabic department?

There are many challenges facing investigative journalism, including restrictions placed on the press and media, and with this, the difficulty of obtaining information and documents, as well as the unwillingness of many human sources to speak to the press, especially in front of a camera.

But working with these difficulties is crucial in generating journalists with strong skills that enable them to tackle complex and unique topics and to constantly develop themselves.

How do you intend to work on Arab investigations following BBC standards despite the challenges facing journalists in Arab countries?

Firstly, the ideas are selected through several stages of discussion. The assessment is completed at each stage following a set of standards, including risk assessment in all its forms. After going through all stages of the discussion, a plan of action is agreed upon and the investigation idea is developed to be produced in proportion with the assessed level of risk.

What kind of investigations will you focus on during your work at the BBC? How can journalists present ideas to be produced as investigative reports with you?

Priority is given to investigations related to corruption and money laundering — especially across borders. We also focus on ideas that reveal important and original issues that are of concern to viewers in the Gulf, the Middle East and the Maghreb, whether they are issues related to organised crime, human rights violations or abuse of power.

Colleagues interested in collaborating with the BBC can contact us to request an idea submission form, via e-mail at ahmed.elshamy@bbc.co.uk.

What are the similarities and differences between ARIJ’s investigative methodology and the BBC’s?

I think there are many similarities in the methodology used, such as the different stages of evaluating proposed ideas and paying attention to the legal aspect of all stages of the investigation, as well as checking the data and verifying the information and documents used in the investigation.

The BBC also sets strict standards regarding the use of confidential recording, video or audio, as well as cases of investigations involving children.

What aspects of ARIJ should be further strengthened and focused on?

Increasing the number of journalists with skills in research and the ability to use modern tools, open sources, search engines and specialised databases, while investing in them on an ongoing basis to ensure they are kept informed of new developments in the field.

Do you have any tips for Arab journalists?

I have three main tips that have helped me reach my current position at the BBC and which may be helpful to colleagues:

First: Set a goal. I have always wanted to work at the BBC, so I read and followed up on the skills required to work in this institution in order to assess what I possessed and what I had to develop. I then formed a development plan in order to prepare for the right opportunity.

Second: Preparation. I formulated a two-year plan, during which I developed my Arabic language skills by attending specialised training workshops as well as studying and reviewing grammar and morphology books, in both Arabic and English. Additionally, I worked on developing and updating my investigative journalism skills in research, tracking and the use of open source and specialised databases.

Third: Prepare for various tests to work at the BBC. When applying to work at the BBC, you are put through several difficult written tests in Arabic and English, which test your knowledge of general information as well as the field of specialisation required. The process also includes interviews in English with several precise questions about the tasks required for the job. One of the conditions of working at the BBC is to pass the IELTS English test.