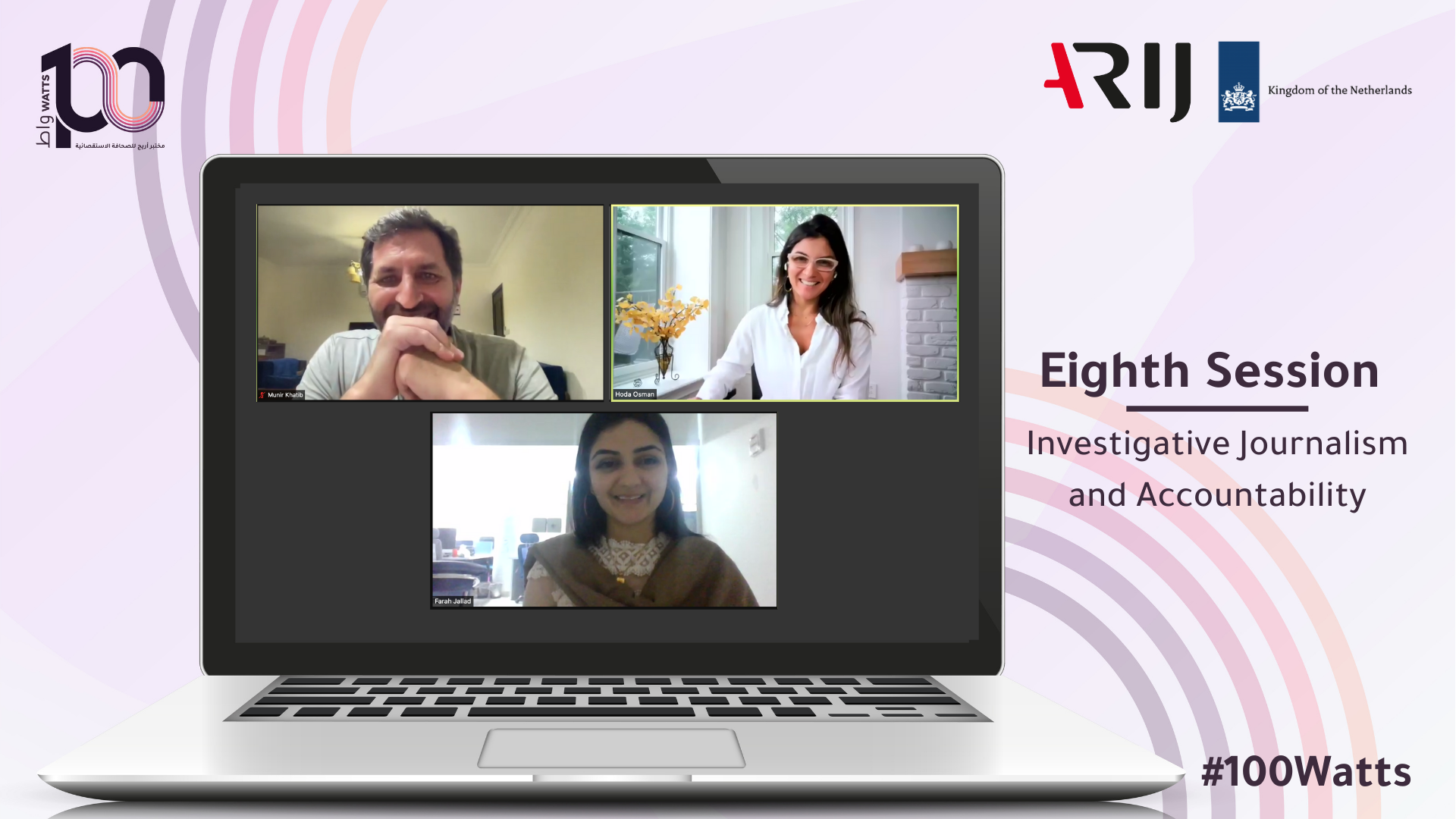 The 9th webinar of the “100 Watts” project addressed the basics of investigative reporting and accountability.

“100 Watts” is a three-year project launched by ARIJ and supported by the Embassy of Netherlands in Jordan. In its first year, the project aims at training more than 100 journalists, content creators, journalism and media students, and professors on audio storytelling “Podcast”, to address vital societal issues in Jordan and promote accountability and reform.

The session, held on 1 September 2021, hosted ARIJ editorial board member, Hoda Osman, and was moderated by ARIJ’s Editor-in-chief, Munir Al Khatib and co-moderated by the “100 Watts” editorial producer, Farah Jallad.

Osman started the session by defining investigative reporting, which involves exposing matters to the public that are concealed either deliberately by someone in a position of power, or accidently, behind a “chaotic mass” of facts and circumstances that obscure understanding. This requires both secret and open sources of documents.

She pointed out that leaked information and documents, and coverage of crime and corruption is often mislabeled as investigative reporting. Osman noted that the use of hidden recording devices does not necessarily make reporting an investigation.

On the difference between investigative and in-depth reports, ARIJ editorial board’s member emphasized that the former is not always longer than the other. Rather, it depends on the methodology and the hidden facts that will be revealed during the investigation.

Osman stressed the importance of thorough research in all forms of journalism, noting that it is more challenging in the case of investigative reporting, especially with serious accusations against individuals or institutions.

She indicated that conducting an investigative report begins with finding the idea. Osman said that journalists should keep their eyes and ears wide open to their surroundings, noting that the idea can originate from newspapers, social media platforms, readers’ comments, official reports, sources and national or international investigative reports. She also elaborated on how to phrase a hypothesis and the steps for planning and developing it. Osman also shed light on “source mapping”, the second stage of the investigation process, which involves identifying the key actors and essential documents in the journalist’s story.

Osman presented cases where hidden devices (cameras or voice recorders) were used, and urged journalists to use them as their last resort and only after all other available means have been exhausted. She stressed on knowing the laws of the country journalists work in and advised journalists to balance between public interest and individuals’ privacy.