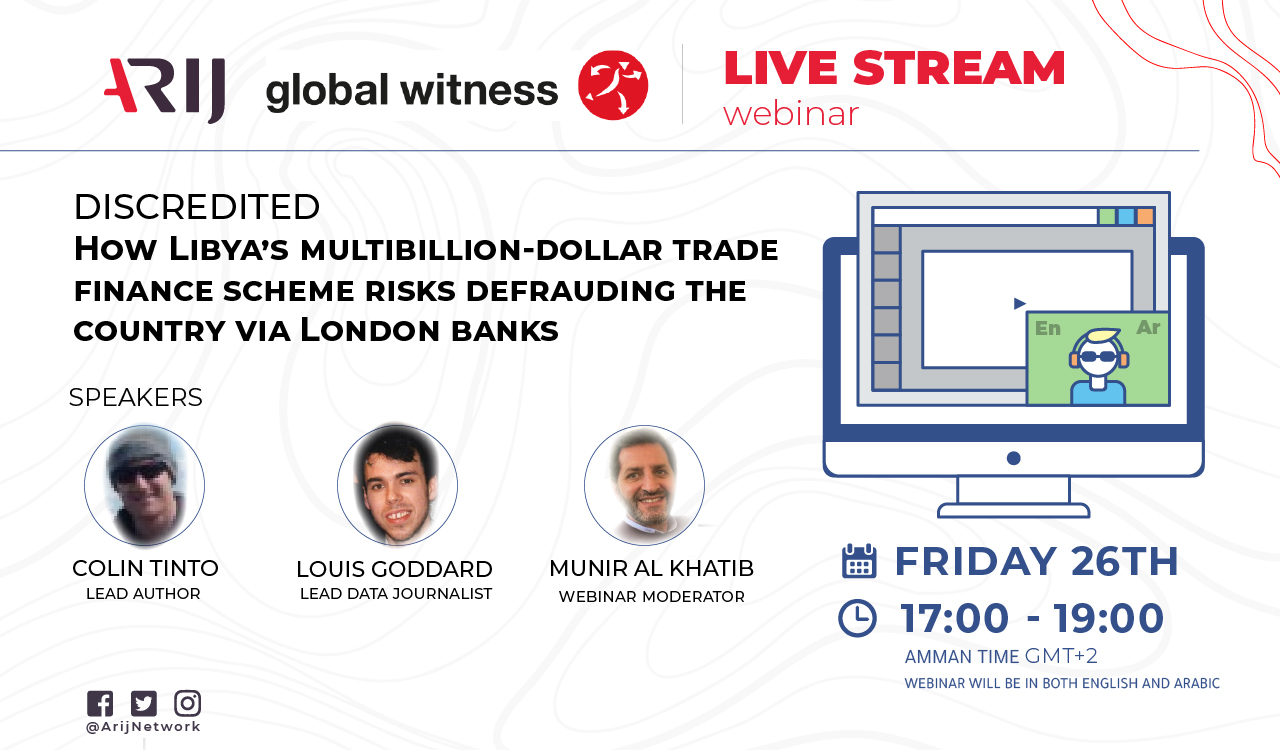 Following their recent Discredited report, Global Witness and ARIJ are teaming up to offer a two-hour webinar on a unique dataset compiled and published by Global Witness based on information about the controversial Letters of Credit system posted by the Libyan Central Bank on their Facebook page.

In Discredited, Global Witness examines the Letters of Credit money trail, which stretches from the Central Bank of Libya to Libyan-owned banks in the heart of London. Drawing on interviews with confidential sources, open-source financial information and our newly created database of nearly $2.5bn worth of Letters of Credit transactions from April to July 2020, we interrogate how Libya spends its Letters of Credit money, how this system has impacted the balance of

power between Libyan institutions and whether the antimoney laundering and counter-terrorism due diligence in the UK correspondent banking industry is robust enough to separate genuine LCs from the proceeds of crime.

The publicly available dataset enables journalists to get a bird’s eye view of Libyan Central Bank’s dollar exchange system and to dig deeper into the companies that were recipients of these dollar transactions.

The short webinar is aimed at journalists working on Libya and the Arab countries, and will introduce them to the dataset which is available as a Google Spreadsheet. The dataset should prove a valuable resource for local journalists seeking leads on how exactly the Letters of Credit system was used by individuals and businesses.

Colin Tinto,the lead author, will present the report’s findings and how they used the data on Letters of Credit system to show possible fraud on the part at the heart of it.

Louis Goddard, the lead data journalist, will talk through the methodology used to retrieve the images posted on the Central Bank’s website and the process of consolidating them into a single shareable dataset that was analysed for the investigation.

Webinar will be moderated by Munir Al Khatib, ARIJ Editor in Cheif.