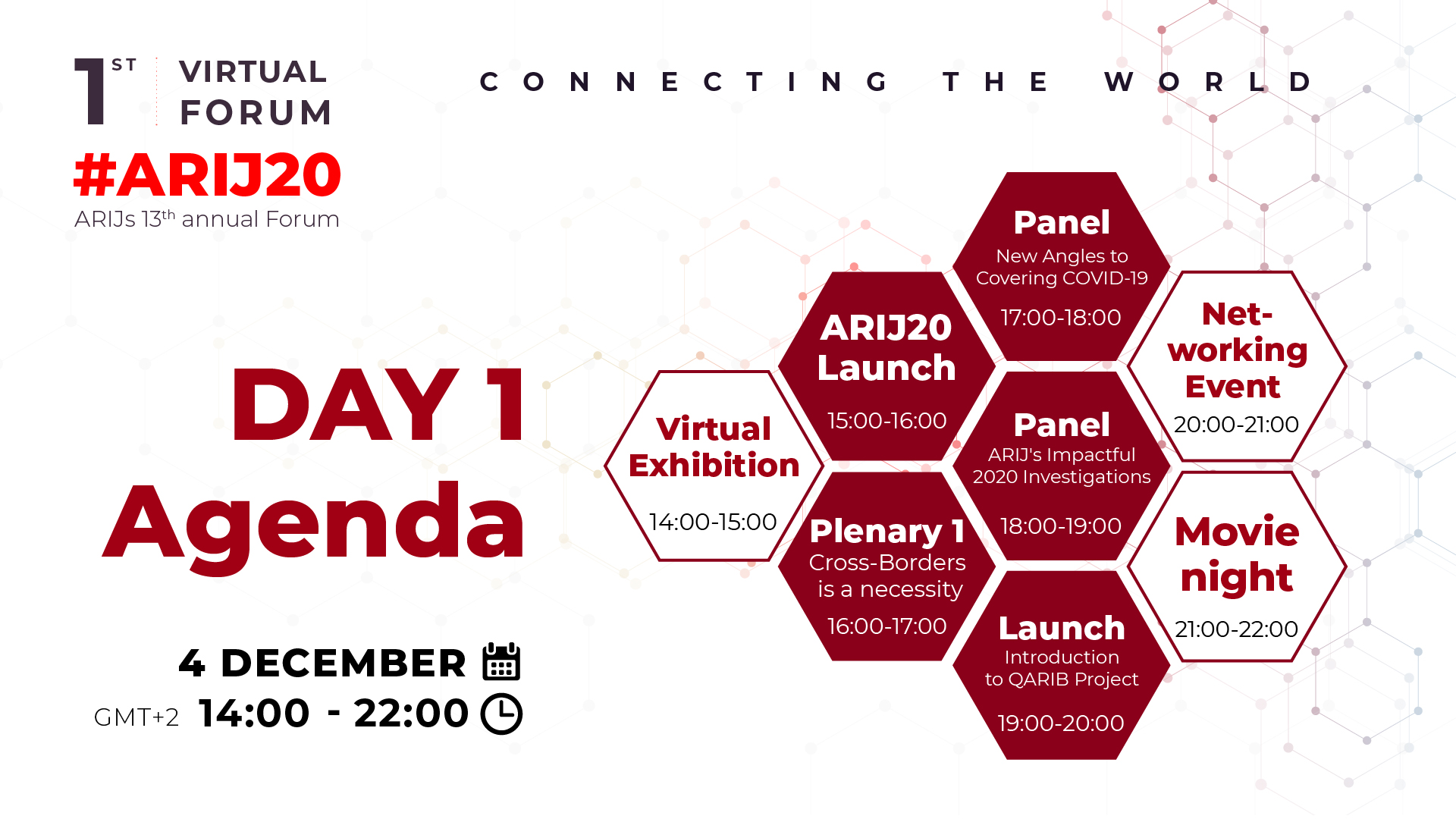 AMMAN – The opening ceremony of ARIJ’s first digital Forum took place on Friday, in the presence of over 1,000 attendees from over 60 countries. Through a digital networking platform and an interactive online exhibition, the opening five sessions were broadcast live, with simultaneous translation into Arabic and English, and live sign language interpretation.

Three European Ambassadors to Jordan attended as guests of honor and gave opening remarks. Swedish Ambassador to Jordan, Alexandra Rydmark, affirmed her country’s support for ARIJ’s work and expressed pride in Sweden’s over ten-year long partnership with ARIJ to support freedom of expression in the Arab world. She also praised the work of Arab journalists for their courage and hard work. British Ambassador Bridget Brind concurred with the assertion that freedom of expression is one of her country’s priorities, saying: “We support and assist the media and press freedom, and believe that it has a major role in accountability.” Norwegian Ambassador Tone Elisabeth Bækkevold Allers shared these sentiments, adding that “Without freedom of expression there is no democracy. How can we carry out economic reform if there is corruption?”

New York Times Media Columnist and Co-Founder of BuzzFeed News Ben Smith also spoke at the opening ceremony, telling ARIJeans that “The courage you enjoy as investigative journalists day after day is a matter of pride. When I explored ARIJ’s website, I was surprised by the stories published by ARIJ. Without you, we would not have known these stories.” During the opening ceremony, Drew Sullivan, co-founder of the Organized Crime and Corruption Reporting Project (OCCRP) and ARIJ Board Member, unveiled the launch of a new Arabic database, “Aleph-ARIJ”, that consists of records gathered by ARIJ over the last 10 years. The OCCRP-ARIJ collaboration is now available to all Arab journalists contributing to the fight against corruption in their countries.

Opening remarks were followed by a short 7-minute film, “ARIJ in the times of Coronavirus”, which reviewed ARIJ’s achievements in 2020. ARIJ Director General Rawan Damen also presented her vision and prospects for the coming year, confirming that ARIJ will extend further support to Arab fact-checkers and will continue to support professors teaching investigative journalism at their institutions.

At the first ARIJ20 Forum session “Cross-border is a Necessity”, moderated by ARIJean Saja Mortada, Senior Editor at NBC News Andrew Lehren expressed that ARIJ is a successful example of networking to ensure the reach of the impact of documents and data provided through international leaks. Yasuomi Sawa, a journalism professor in Japan, reiterated the power of cross-border collaboration, saying: “The Panama Papers were the basis for cross-border investigations. The cooperation that occurred between the journalists working on these files is what made the investigations so powerful.” Fabiola Torres, founder of “Health with a Magnifying Glass” in Peru, also spoke about medical workers who endured the COVID-19 pandemic with poor medical protection and the lack of transparency found through cross-border health investigations. Finally, Dr Mark Lee Hunter, author of the ARIJ manual for investigative journalism, “Story-Based Inquiry”, asserted: “A journalist does not need to be part of a journalistic organization to work on a cross-border investigation. We are in constant contact with them.”

In the third session moderated by ARIJ Managing Editor Munir Al-Khatib, ICIJ Senior Editor Michael Hudson expressed his admiration for the struggle of journalists who work in countries where they are exposed to dangers on a daily basis.

The final session of the first day consisted of a dialogue session moderated by Rasha Qandeel, with two ARIJeans, Gehad Abbas from Egypt and Fatah al-Rahman al-Hamdani from Sudan. Discussion surrounded their investigations broadcast this year through a collaboration between ARIJ and BBC Arabic, and was followed by a Q&A.

Over the next two days, the Forum will offer more than 10 sessions, and will conclude on Sunday evening with the announcement of the 2020 ARIJ Investigative Journalism Awards for the best Arab investigations.