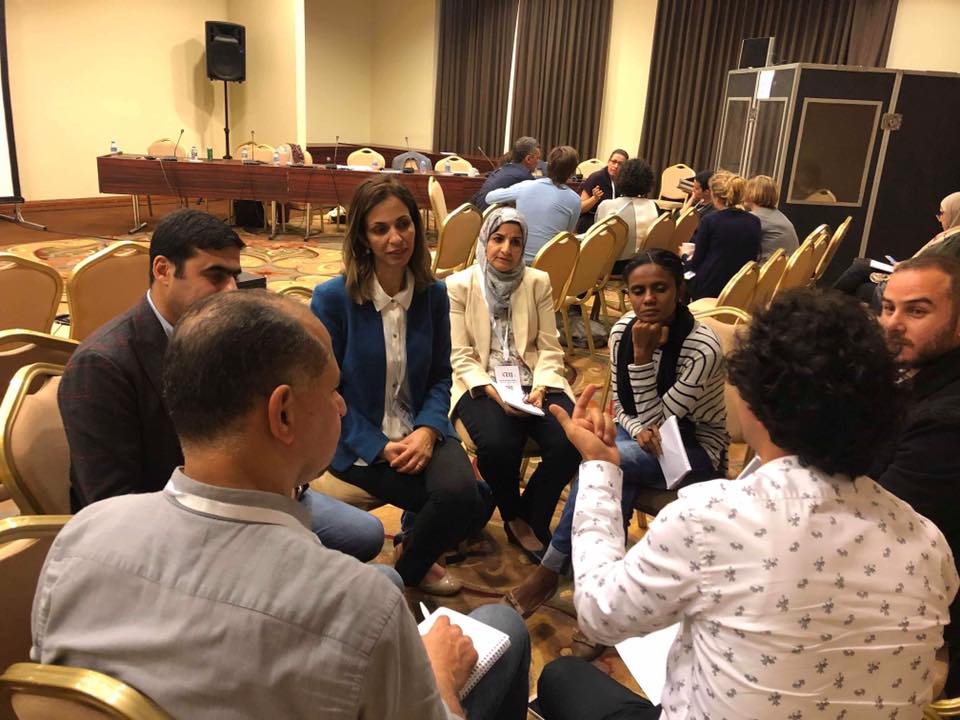 Each has had to find ways to serve their audience based on the unique characteristics of their target market, as well as their staff, available technology, banking and payment arrangements and political environment. The unique challenges of each, and the solutions they have found, suggest paths that others could find productive.

Lina Attalah was chief editor of Egypt Independent in 2013 when that newspaper’s publishers closed it down because they found it impossible to make money under the new political regime.

“The facade is financial, but there are politics in economic moves,” Attalah said.

Some two dozen of the paper’s former employees decided to start a new online newspaper, Mada Masr, with the idea of producing “intelligent and engaging journalism” for a young Egyptian audience interested in business, the arts, social development, education, human rights, medicine and finance, among other topics (mada is the Arabic word for span or scope, reflecting the broad range of topics they wanted to tackle, and masr is Arabic for Egypt).

Five years later, the bilingual publication has a substantial following online, which Attalah attributes to the credibility of the brand. A profile of Attalah in Time magazine noted that “Mada Masr has earned a reputation for being fearless” and “running blockbuster corruption investigations.” The Egyptian government blocked Mada Masr’s website in May of 2017, supposedly for supporting terrorism,  so readers have to access articles on Facebook or through a VPN. The government has also blocked public access to many other independent news sites.

One of the biggest challenges for the new publication was developing a business model. Attalah said that several of the journalists had to learn new skills in marketing and sales; now five members of the team list “business development” as part of their job titles, three of whom also have editorial responsibilities.

About 80 percent of its funding has come from various foundations and non-profit organizations, including Denmark’s International Media Support and the Rosa Luxemburg Foundation in Germany. Most of the rest comes from what Attalah described as editorial services and translation, a sort of  full-service advertising and public relations agency, which they describe as “traditional and integrated marketing solutions, branded media, entertainment opportunities, experiential marketing services, event activations and digital web campaigns.”

Mada Masr also produces a daily newsletter aimed at an English-speaking audience with a subscription price of $45 for three months. It offers an overview of  the Arabic-language press in Egypt, translated into English, on political, economic and social conditions.

In addition, Attalah said the publication is testing  various ways of generating user revenue with a core group of 100 “members”– such as freemium subscription models and memberships. They are also about to launch “membership 2.0,” she said.

Mada Masr generates some income from training and events, although the events are more for generating visibility and reader loyalty.

“Events are great brand builders, but we just try to break even,” Attalah said.

With all the challenges that publications face in the Arab World, “You can’t leave journalism to market forces,” says Lina Ejeilat, co-founder and editor in chief of the digital publication 7iber in Jordan. “It’s not fair and not achievable.”

Quality journalism in the future will require some kind of foundation or government support, she told the ARIJ audience in Jordan.

7iber, whose name means “ink” in Arabic, and Ejeilat have been outspoken advocates for free speech in Jordan, which has led to censorship and restriction by the government. The online publication “seeks to promote an open society that upholds values of accountability, rule of law, human rights, and pluralism, through in-depth multimedia journalism, critical analysis and public conversation,” according to its website.

The publication also has a free daily email newsletter, another vehicle for slipping past censors.

7iber, which has a staff of 12, has been reliant on funders since it was founded in 2007 as a platform for citizen journalism. At times, the journalists had to work without receiving a salary and supported themselves with other work.

The organization’s website lists its main supporters as the European Endowment for Democracy, The Netherlands Embassy in Amman, International Media Support of Denmark, the Swiss Embassy in Amman and Hivos of the Netherlands. Previously it received support from the Open Society Foundation, Heinrich Boell Foundation, the Swedish International Development Cooperation Agency, Internews and the Arab Partnership Participation Fund.

In 7iber’s early years, an important source of revenue came from running training events of several days or more. But eventually that took too much time away from the journalism and the team has de-emphasized it in recent years.

In 2013 and 2014, the government cracked down on digital publications, and required them to obtain licenses, which led to restrictions and censorship. Journalists and columnists were prosecuted under anti-terrorism laws.

7iber opposed the licensing requirement and tried to avoid being blocked by the government by switching internet domains several times. Eventually it was fined and forced to comply.

“The challenge is not knowing when the government can pull another card against you because the climate is one of increasing restrictions and censorship,” Ejeilat said in a 2015 interview.

Facebook and a daily newsletter became 7iber’s critical distribution channels — vehicles for slipping past the censors.

Ejeilat received her master’s in journalism in new media from Columbia University and a BSc in electrical engineering from the University of Jordan. Lina is a member of the MENA Advisory Group of the international Committee to Protect Journalists.

In 2016, after the arrest and later assassination of a Christian journalist whose cartoon was deemed disrespectful of Islam, Ejeilat wrote a guest column for the New York Times. She pointed out that while the Jordanian monarchy nominally protected free speech, the reality of the government was quite different, writing: “If Jordan is going to fight radicalization and violent extremism, it needs to start by upholding the right to free speech.”

Walid Mejri, co-founder and editor in chief of Inkyfada in Tunisia, said his organization had its origins in the chaotic media environment of 2013. Many news organizations were shutting down. He and some fellow journalists were disgusted with the corrupt media and propaganda that remained and decided to launch an organization called Al Khatt, whose purpose was to promote freedom of the press and freedom of expression.

Part of the revenue model for Inkyfada’s parent organization is quite unusual. They owned an office space with more room than they needed. They began renting out the excess space to others for co-working, training and other events. Eventually they went into the events business and created websites for each of their clients’ events.

Mejri described the organization’s revenue sources in the past year as coming 60 percent from rent and the events business, 35 percent from the Open Society Foundations and the rest from other sources. In the year ending April 2018, the OSF grant for media projects totaled $112,000.

Inkyfada’s newsroom has eight journalists, one web designer and one video editor. However, it also has a lab, employing five web developers and a designer, which has been creating an app, inku.be, for other news organizations to use for producing multimedia interactive storytelling. Mejri said that the app is now ready for the market and could generate revenues sufficient to run the organization for three years.

In addition to the grant mentioned above, Inkyfada’s parent organization, Al Khatt, has received, over the past five years, another $110,000 from OSF, $9,000 from DCAF (Switzerland), and €117,000 in a series of grants for various projects from DW Akademie (Germany), Free Press Unlimited (the Netherlands), Reporters Without Borders (Germany) and International Media Support (Denmark). However, Mejri is hopeful that eventually the revenue from the app and other activities will make the organization less dependent on grants.

For Alia Ibrahim, co-founder and CEO of Daraj.com in Lebanon, the goal is to produce enough revenue to be independent of advertisers and sponsors.

“Even donation money isn’t independent,” she told the audience at ARIJ.

She is a former senior correspondent for Al Arabiyya, a former contributing reporter for the Washington Post and the former managing editor of the Daily Star in Lebanon. Daraj’s goal is to create a platform with news in Arabic from all over the region, some produced by their own team of eight people and the rest aggregated from the approximately 85 journalists they are working with from around the world.

In an interview last year with International Media Support, a Daraj donor, Ibrahim said the goal is to present “the third story,” namely the one that isn’t either pro-Saudi (Sunni Muslim) or pro-Iran (Shiite). Too much of the news in the region is influenced by one or the other of these forces, she believes. (Another Daraj donor is the European Endowment for Democracy.)

The Arab world is not ready for a user-funded model, she believes: “Arabs won’t pay for subscriptions.”

So, for the moment, Daraj is operating on a hybrid model in which they are producing some lifestyle articles and sponsored content that appeal to advertisers who don’t want their message presented in the context of stories about divisive politics.

Daraj has been spending about six percent of its budget on boosting its posts on Facebook in order to reach a significant audience. But there are problems with that platform.

Hazem el Amin, a co-founder of Daraj, spoke on a panel at the ARIJ forum, explaining that Facebook is a critical distribution vehicle for independent media, but that the social network is censoring them. He is also the head of the investigative unit at the pan-Arab newspaper Al Hayat and chief columnist there.

He offered as an example that articles that even mention the terrorist group ISIS or the Islamic State are blocked on Facebook. Even lifestyle articles on such things as the health risks of breast implants or references to artworks that show nudity are blocked. “We need Facebook to understand our problems,” El Amin said.

A Facebook representative on the panel, Fares Akkad, head of Media Partnerships in the Middle East, Africa and Turkey, responded with the familiar argument that “we are a platform, not a publisher.” He argued that Facebook has to respect the local laws in each country where it operates, some of which ban references to human sex organs or articles that aim to recruit people to ISIS.

Meanwhile, Ibrahim is focused on making journalism a respected profession in the region and creating opportunities for young journalists.

“We want to make journalism a decent job and pay decent salaries,” she said. “They can’t be working part-time as consultants for politicians,” which some journalists have had to do to support their families.