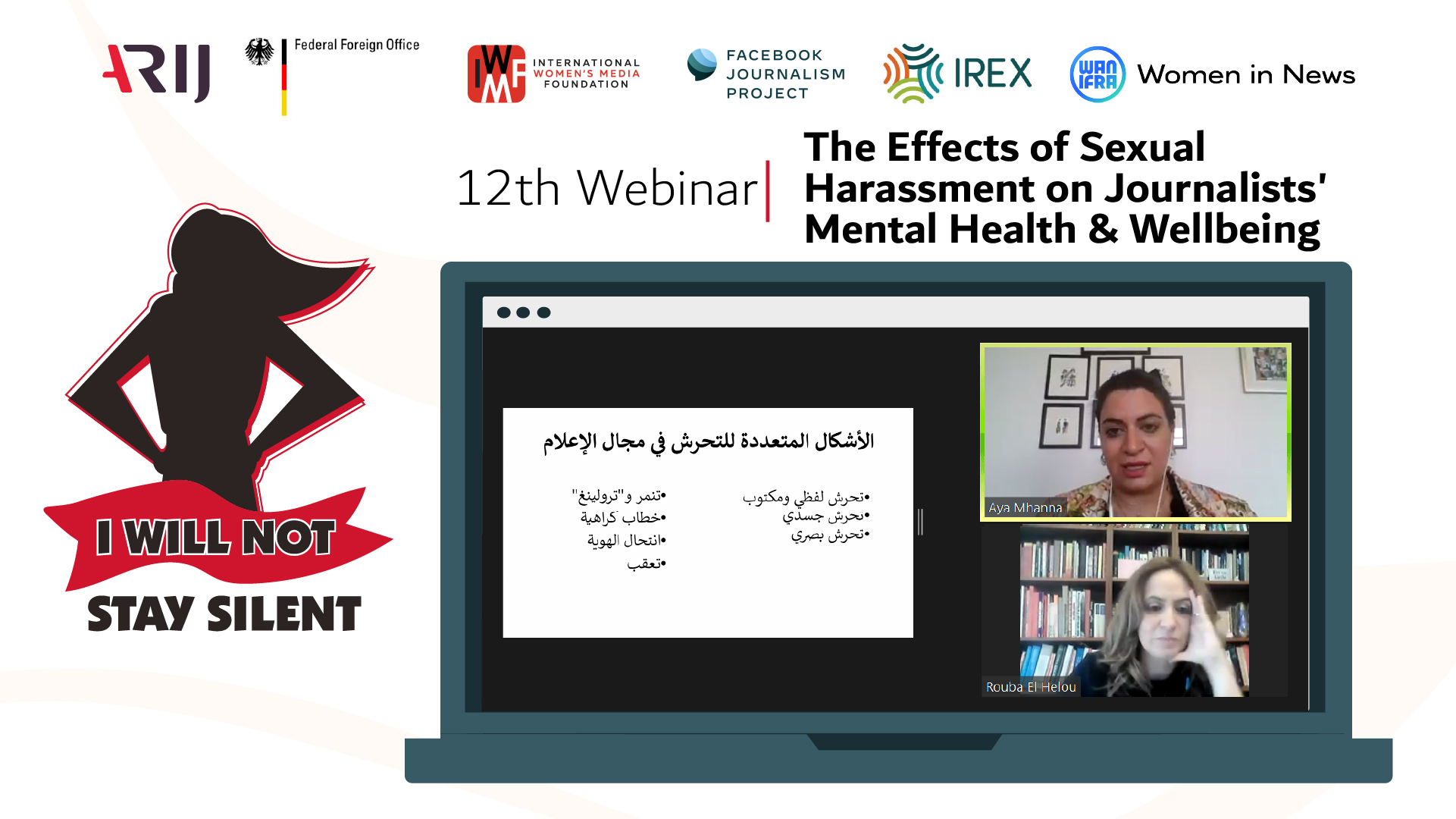 “I Will Not Stay Silent” webinar series concluded with a 12th webinar addressing the effects of sexual harassment on the mental health of journalistsin line with the project’s aim to create a safe, pluralistic media environment that is free of discrimination.

“I Will Not Stay Silent” is a year-long project launched by ARIJ (Arab Reporters for Investigative Journalism) in partnership with the Facebook Journalism Project, Women in News / WAN-IFRA, the International Women’s Media Foundation (IWMF), and SAFE, IREX. The project is supported by the German Federal Foreign Office.

The session, held on 31 May 2021, hosted Aya Mhanna, clinical psychologist & psychotherapist and IREX – SAFE MENA program manager, and was moderated by Dr. Rouba El Helou, political communication and gender lecturer at the Faculty of Law and Political Science at Notre Dame University-Louaize in Lebanon.

Mhanna started the session by presenting statistics on women who were subjected to harassment in newsrooms in Australia, which accounted for about 70% in the television sector, 50% for the radio, and 56.7% for print and digital newspapers.

She pointed out the variance of sexual harassment forms that women face in media field, which included: verbal and written, physical and visual harassment, in addition to other forms such as: bullying, hate speech, impersonation and stalking.

Mhanna considered lack of awareness and poor education that favors males over females, factors that contribute to  justifying harassment. She noted that the harasser is only interested in imposing his power over the less powerful person, especially since harassment laws in the region, when they do exist, are not sufficiently deterrent. Rather, the stereotyping of women may prevent their implementation.

The clinical psychologist advised female journalists who survive sexual harassment to allow themselves to feel the pain caused by the harassment and to know that this is a normal reaction to an abnormal action.

By the end of the session, Mhanna provided some tips on how to deal with harassment incidents, including: documenting the experience, avoiding self-judgment, staying in contact with one’s support system, setting safe boundaries with negative people, and seeking support if needed.

The second component of “I  Will Not Stay Silent”,  the three-month virtual diploma program, “Together Against Discrimination” will kick off on 1 June. The program focuses on equipping participants with theoretical and practical hands-on knowledge to design and implement effective internal complaints mechanisms against the misuse of authority in working environments, to permit stakeholders to effectively respond to and investigate complaints.