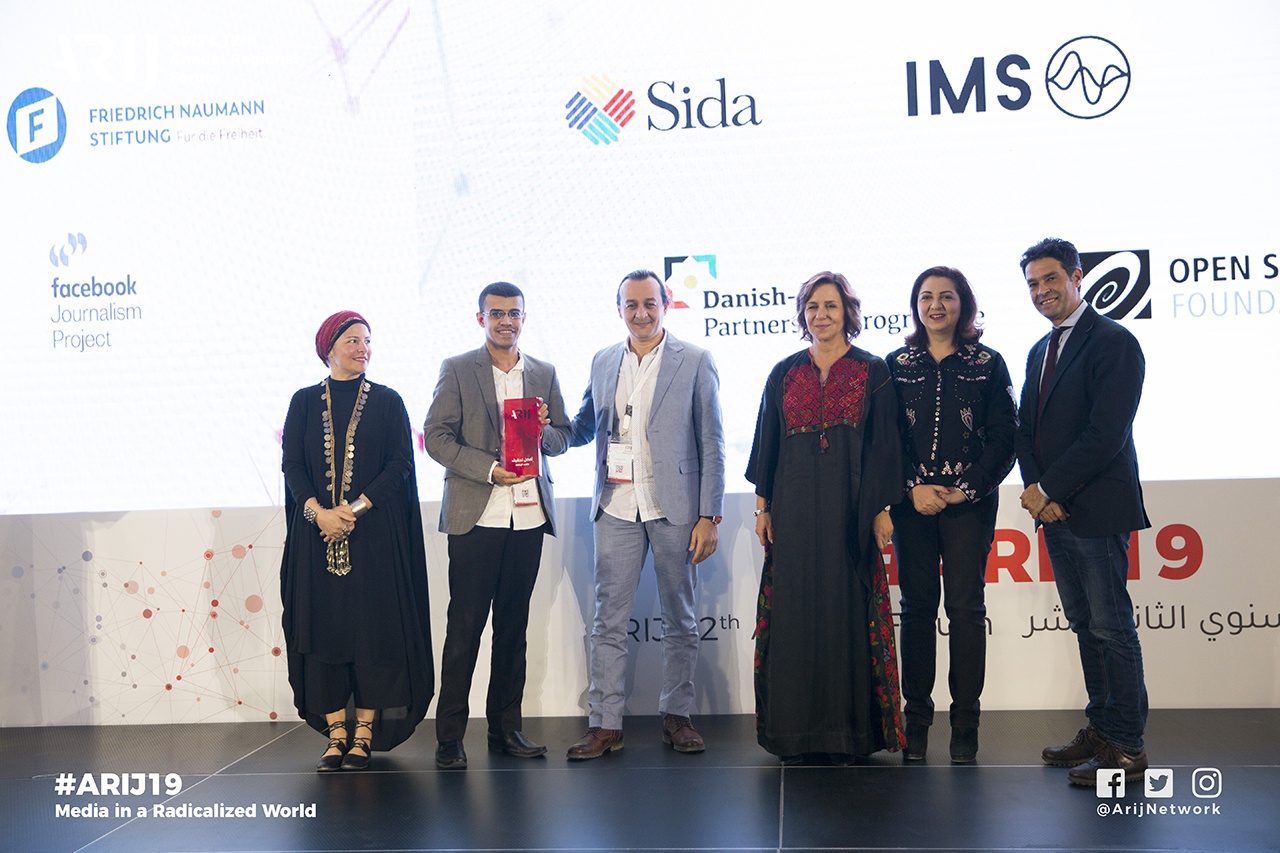 Amman, Nov. 24, 2019 – Journalists from Egypt and Yemen, who exposed human rights abuses and corruption in their communities, took top prizes for best investigations in short film and multimedia in 2019 from Arab Reporters for Investigative Journalism (ARIJ).

The winners were announced at a gala dinner on Sunday concluding the 12th Forum for Arab Investigative Journalists organized by ARIJ, the only such Arab platform in the region. Over 580 Arab journalists and international trainers from 34 nations attended the event, the 11th in Jordan since the creation of ARIJ in 2005.

Egypt’s Ahmad Assar won the best prize for ARIJ short-form investigations for his in-depth report “Forced Retirement”. The investigation looked at the case of Egyptian sports’  commissions who avoid paying the expenses of players within individual sports who get injured while participating or preparing for tournaments as part of the Egyptian national team. This pushes athletes to retire since they cannot afford the treatment of their injuries.

The best prize for ARIJ multimedia went to Ahmad al-Shamy from Egypt for “Cleopatra made outside Egypt”. He revealed the involvement of an organized ring of businessmen and politicians from various countries to protect companies that manufacture and smuggle Egypt’s popular Cleopatra cigarettes in boxes labeled as “Made in Egypt”. The goods are then sold in Egypt and other countries as locally-made.

The best prize for ARIJ Arab multimedia investigation went to Yemen’s Aseel Saria for “Corrupt Aid under UN supervision”. The investigation, broadcast on VICE Arabia, uncovered how large amounts of non-conforming humanitarian aid were sent to Yemen by international aid organizations. The consumption of these batches led to fatal health complications in light of the deteriorating health system in Yemen.

The ARIJ Jury committee gave a “special mention” to the long-form video investigation “The End User” after withholding the fourth prize category for best long-form video because of a low number of entries.

The ARIJ board decided award prizes in four categories in 2019: three open to in-depth reports produced after training and funding from ARIJ. The fourth was open to all investigative journalists in the Middle East and North Africa. A total of 71 investigative reports were submitted to the contest.

Louay Ismael, head of the ARIJ Jury Committee 2019, said it was quite a challenge to judge the edge-cutting quality of investigative reports completed by journalists who worked hard and took great personal risks to expose the truth in favor of accountability and rule of law.

Ismael, who heads the programs department at BBC Arabic, said all categories showed “a strong commitment by all investigative journalist to push the bar of freedom of expression to record and document abuse and corruption in various political and social sectors” against all legal, political and professional odds.

Ismael said the winning investigations tackled “local issues of high importance” to societies, exposing what “many wanted to keep hidden”. This, he added, is one of the marvels of investigative journalism.

The award-winning Amman-based ARIJ is the region’s only network promoting a culture of investigative reporting in Arab newsrooms through training and coaching productions since 2005.