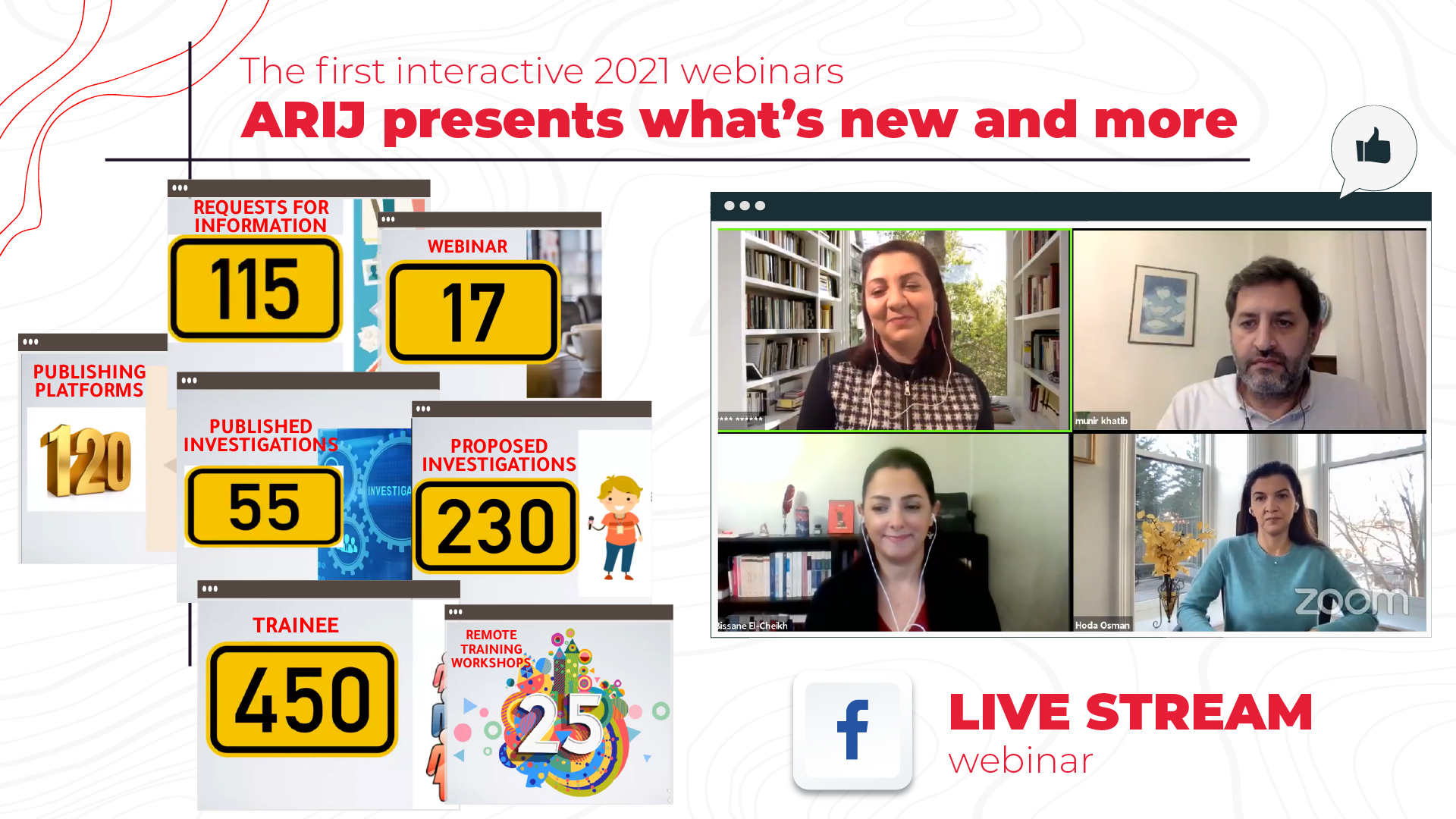 ARIJ Network – “Arab Reporters for Investigative Journalism” held its first webinar in 2021 under the title “ARIJ with you and more,” during which it reviewed its plan for the new year to support investigative journalism in the Arab world. The webinar hosted the Executive Director Rawan Damen, Editor-in-Chief Munir Al-Khatib and members of the Editorial committee, Hoda Osman and Bissane El-Cheikh, with more than 250 journalists in a live broadcast on Zoom and Facebook platforms.

At the beginning of the webinar, ARIJ’s Executive Director, Rawan Damen, presented the achievements of last year; pointing to the holding of 25 remote training workshops, benefiting more than 450 journalists who rated the overall quality of the workshops as above average, with a satisfaction rate equal to 90%. In addition, 230 journalists submitted investigation proposals to the editorial committee to carry out investigations, 55 of which were approved and published on more than 120 different publishing platforms. Investigations were translated into English and other languages ​​such as French and German, some of which won Arab and International awards. As for ARIJ’s Research Center, it has supported 115 requests for information and documents to help journalists access the information needed to produce their investigations.

The focus will be on intensifying the story and digging deeper

In turn, ARIJ’s Editor-in-Chief, Munir Al-Khatib, stressed that the goal this year will focus on “specialising” in investigative work, adding: “We need specialised investigations due to the need of our Arab societies, so we will design our training workshops to achieve this goal.” He stressed the need for interesting storytelling aspects in the published reports. He added, “We aim for specialised investigations with more precise angles, and we seek to ensure that the investigation does not exceed 1500 words.”

Bissane El-Cheikh, a member of the editorial committee,  spoke about ARIJ’s training plan in the year 2021, and announced specialised workshops that will shed the light on creative writing for investigative journalism by hosting Arab and international expertise.

As for the topics that will receive special attention from the editorial committee, El-Cheikh clarified that “the current year will generally focus on the health and education topics in addition to issues on follow-the-money and corruption in the Arab world.”

How to submit an investigation proposal?

Editorial committee member Hoda Osman confirms that the only way to submit a proposal to carry out an investigative report with ARIJ is through filling out the relevant form on the ARIJ website. As a compulsory requirement, the reporter must complete the three required self-paced courses on EDRAAK platform to ensure the successful completion of the application and its qualification for assessment. Regarding the acceptance criteria, Osman indicated that the proposals should contain new ideas or focus on angles that were not previously discussed. Osman added, “Through the submitted proposal, we will test the level of writing and the effort that the journalist made in gathering information and documents, conducting information and writing a strong hypothesis.”

Osman explained the committee’s mechanism for dealing with submitted proposals: “The editorial committee has two weekly meetings, and within three weeks of submitting the proposal, we respond to the applicants and vote to accept or reject an idea. In some cases, we invite the journalist to meet with the committee to discuss the feasibility of carrying out the investigation with minimum risk.”

What happens after the proposal is approved?

Editor-in-chief Munir Al-Khatib explained the mechanism of working with journalists after approval of their proposals. “When the editorial board approves an investigation, a coach will be assigned internally or from ARIJ’s pool of experts from almost all Arab countries. When the first draft is finalized, the report will be edited and sent to a fact-checker. Then, it will be referred to a lawyer to ensure that it is free from any legal breach and that it adheres to the ethics and laws of journalistic work. After completing all these stages, an agreement with different publishing platforms will be done, in parallel with translating the reports into English and other languages if and as required.”