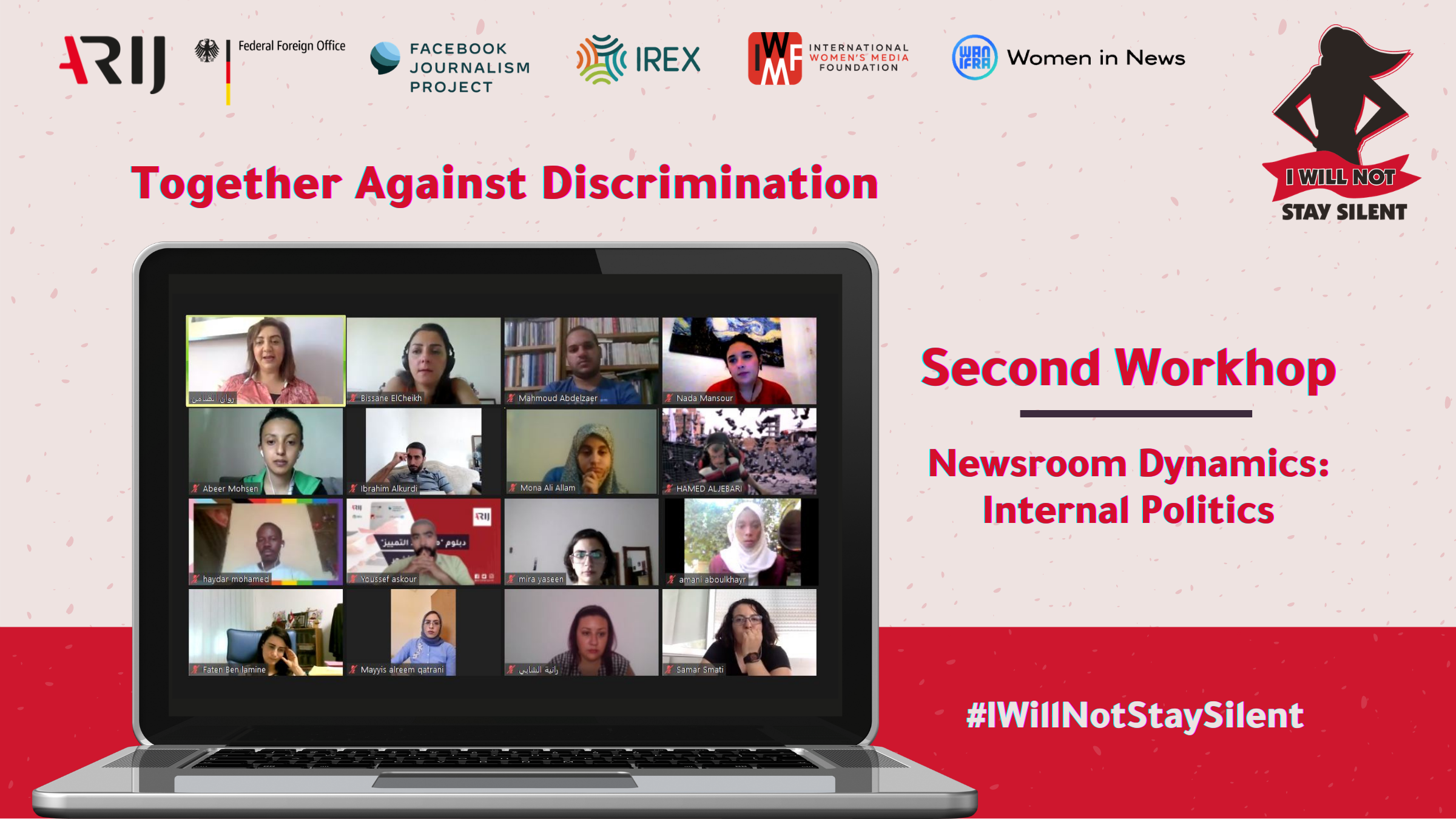 “Together Against Discrimination” Addresses Internal Dynamics Within Newsrooms

The 2nd session of the virtual diploma program, “Together Against Discrimination”, addressed discrimination, corruption, and misuse of power within the newsrooms.

“Together Against Discrimination” is a three-month training program targeting Arab journalists, researchers, and civil society professionals. It is the second component of  the “I Will Not Stay Silent” project,  launched by  ARIJ (Arab Reporters for Investigative Journalism) in partnership with the Facebook Journalism Project, Women in News / WAN-IFRA, the International Women’s Media Foundation (IWMF), and SAFE, IREX, and supported by Germany’s Federal Foreign Office. The project aims at creating a safe, pluralistic, and diverse media working environment that is free of discrimination.

The session, held on 8 June 2021, hosted ARIJ Director General Rawan Damen and ARIJ editorial board member Bissane ElCheikh.  Damen pointed out that the importance of the session stems from the special internal dynamics in newsrooms and various forms of power misuse problems that manifest within them.

She noted that many small and large newsrooms do not have any women employees, because of the wrong assumption that media professions are inappropriate for women. Discrimination against women, according to Damen, takes various forms, such as: sacrificing women when reducing the number of employees in an organization, under the pretext that she is not the breadwinner of the family.

Damen also touched on other forms of misuse of power within media institutions, ones related to bargaining, corruption, and discrimination based on color, religion, gender or otherwise, which contributes to creating divisions and loyalties, adding that factors related to fame, money and/or influence exacerbate the situation.

Damen also shed a light on what is known as “Lazy press”, which describes a large number of journalists who theoretically belong to media institutions, but without any real achievements in journalism, pointing out that the lack of effective accountability measures leads to the “institutionalization” of corruption and its rooting in institutions.

ElCheikh presented the second part of the session, in which she presented several cases of marginalization, exclusion and discrimination against women within media institutions, particularly intangible forms that are difficult to prove, such as motherhood and age-based discrimination. ElCheikh then opened a discussion with the participants on different cases of discrimination and misuse of power in institutions and how to best tackle them.