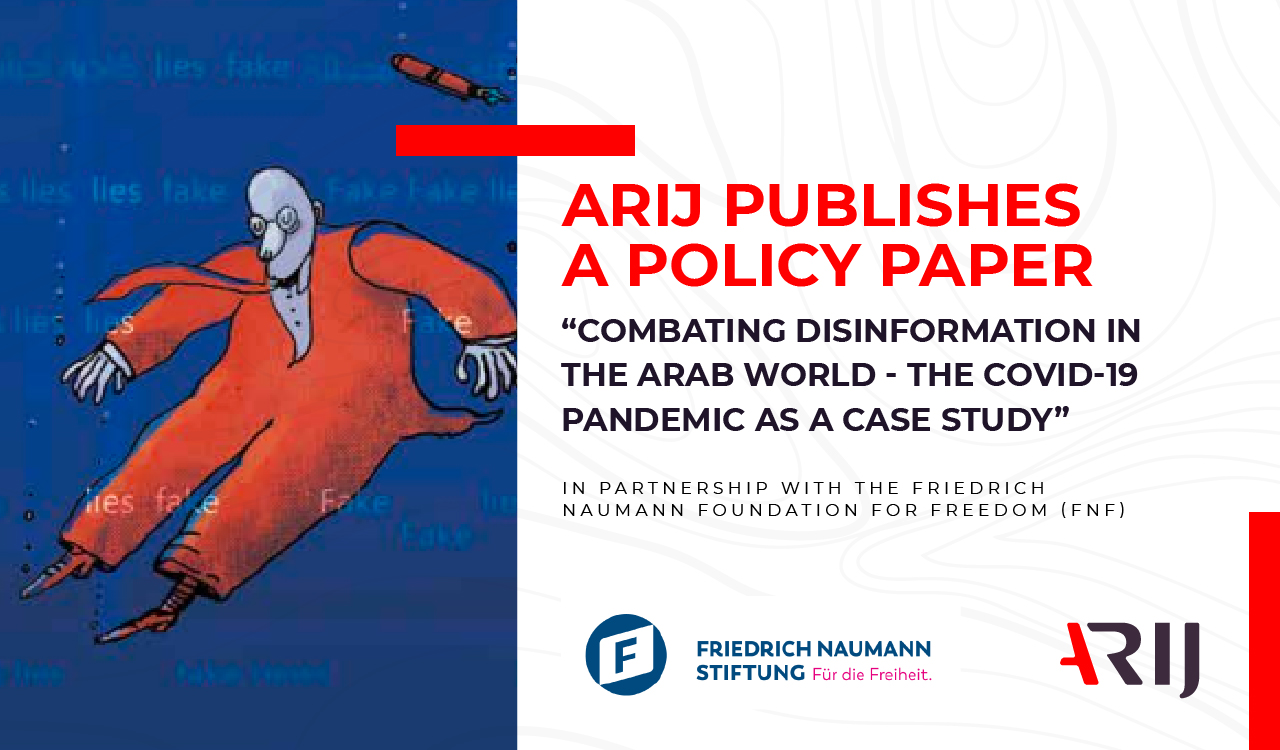 Amman, Jordan (December 5, 2020) — Arab Reporters for Investigative Journalism (ARIJ) In partnership with the Friedrich Naumann Foundation for Freedom (FNF), has published a policy paper on “Combating Disinformation in the Arab World: The COVID-19 pandemic as a case study”.

The policy paper, conducted by researcher Noha Atef, and with support from Basma ElMahdy and Basma Mostafa, uses COVID-19 as a model to arrive at the causes and effects of misleading content, also offering alternative solutions that would allow for the improvement of media performance. ARIJ prepared this paper during the pandemic and, in drafting it, relied on interaction with Arab journalists who were working during the consecutive lockdowns imposed in most of their countries. This interaction between ARIJ and the media continued for over three months in order to extract information –– be it through publications and investigative questionnaires on Facebook –– or by polls which involved 229 Arab journalists. ARIJ also conducted dialogues with 17 experts from the press, representatives of local and international institutions concerned with training and supporting journalists, and representatives of Facebook, Twitter and Google, via personal and group interviews or regular correspondence.

ARIJ ascertains that when studying the causes of the emergence and spread of misleading news, it should not solely examine the performance of media professionals. This is because, in the current era, anyone can own a host of content production tools which spread content across various social media platforms. Therefore, addressing the issue of fake news must be informed by the social and cultural context that generates it, and measures to combat this news should aim to modify the climate in which it appears.
In this paper, we focus on journalism as a whole, whether practiced by professionals who publish their work within media institutions, or independents –– specifically those who choose to evaluate the performance of media institutions and scrutinize what they publish.

The paper comprises three chapters. First, it discusses what fake news is, distinguishing it from other variations of misinformation and refuting common assumptions surrounding it; second, it unpacks the state of fake news in the Arab world during the COVID-19 pandemic, specifically until August 2020; third, it names the most important methods used in the region to confront this news, discussing their effectiveness and shortcomings. Finally, the paper puts forward recommendations to prevent and combat the regional spread of misleading news.

Since its inception 15 years ago, ARIJ has trained over 3,000 journalists, media professors and students, and has participated in establishing investigative units in Jordan, Tunisia, Palestine, Yemen, Egypt and Lebanon. ARIJ has also supervised the broadcast/publishing of over 600 investigative reports through international and Pan-Arab TV stations, such as BBC, Aljazeera English, DW Arabic and The New Arab, not to mention the fact that ARIJ’s investigative journalism curriculum is being taught at a number of Arabic media schools across the region.

To download the paper in English, please fill in the form below: