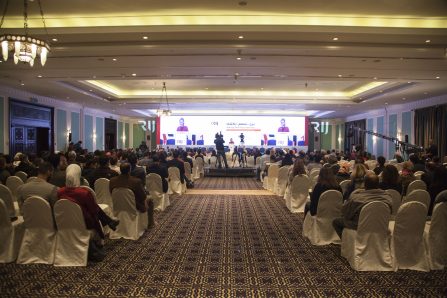 The Dead Sea, Jordan, December 3, 2016 –Four journalists from Jordan, Tunisia, Egypt and Yemen, who have exposed torture and injustice in their societies have won the 2016 ARIJ prize for best investigation in print, film and cross-border reporting.

The winners were announced at a gala dinner at a Dead Sea hotel in Jordan on Saturday, at the end of the 9th conference for Arab investigative journalists organized by Arab Reporters for Investigative Journalism (ARIJ). ARIJ is the region’s leading media support organisation spreading the culture of accountability in nine Arab states since 2005.

Jordan’s Musab Shawabkeh, head of the investigative unit at Radio Balad, and Mohammad Ghabari, won the prize for best print investigation “Business Deputies”. Shawabkeh, a fourth time ARIJ prize winner, and his colleague, exposed how deputies in the Jordanian parliament won public tenders worth millions of dollars in return for collusion with the government to pass laws and unpopular policies.

Yemen’s Abdulwali Mathabi won best prize for his short film “Dead without Graves”. Using official documents, he showed how corpses are piling up at hospital morgues, sometimes for seven years because of bureaucracy or in cases where the dead are implicated in criminal cases.

Mostafa Marsafawi, from Egypt, won best prize for his long form film “Death in Service” which was screened on the BBC in English and Arabic. In his investigation, he reaches strong fact-based conclusions that cadres of the Central Security Forces are abused by their superiors, even killed, while state institutions and the judiciary turn a blind eye against these systematic violations. The investigation triggered a wave of criticism among pro-government media in Egypt and prompted the dismissal of Marsafawi from his job at a local paper.

Saadah Abdul Qader from Egypt and Najwa Hamami won the special ARIJ prize for best cross border investigation “Upside Down”.  Both journalists engaged in a four-month effort to expose how governmental authorities entrusted with caring for the injured of the 2011 revolutions and the families of martyrs in Egypt and Tunisia violated their legal rights, psychological needs and medical treatment. This is Abdul Qader’s third prize with ARIJ.

Britain’s Paul Eeedle, who headed the three committees under the 2016 ARIJ Prize, said the juries were encouraged by the range and depth of the investigative stories submitted by 39 ARIJEANS at a time of great pressure on media freedoms across the region.

“Journalists have identified important stories and tackled them with courage and dedication. The juries admired the depth of human feelings in many of the stories, although they also want to caution journalists against emotional language: an investigative story convinces its audience through solid facts and by looking at all sides of an issue, not by arguing for a point of view. In each category, there were several stories which could have won the prize and it was very difficult to choose between them. All those shortlisted for the prizes should feel extremely proud of their work.”

Eedle is a journalist and media executive who has shaped the programmes output of Al Jazeera, managed large news operations for Reuters and pioneered multimedia content online for his own venture, Out There News. He speaks English, Arabic and French and has reported from 24 countries on four continents.

The forum, the largest ever organized by ARIJ, coincides with the 10th anniversary of the network. It was attended by over 400 Arab journalists along with over 30 foreign investigative journalists and trainers.