Exchange Marriage in Yemen: A Time Bomb for Hundreds of Families

Asharq al-Awsat – Twenty-two years ago, Fatima was forced to marry someone she did not know in exchange for her brother’s marriage to the sister of her groom.

At 19, she had no say in her exchange marriage in Yemen’s Raimah province (200 km south-west of the capital Sana’a). She could neither accept nor refuse; her father and brother decided her destiny and future.

Exchange marriage is a lingering problem in rural areas despite consequences that include harm to children and frequent separations. This “al-shighar”, or “al-zakar”, violates religious texts, yet remains a tradition in what is considered one of the most religious Arab societies.

These marriages begin with two men granting each other their daughters or sisters without dowry. They do not care if this means one party often forces the other into divorce soon after.

In most Yemeni provincess men impose this “barter” deal by circumventing the Personal Status Law – which stipulates that brides be given a dowry. The law contains no penalty for violators.

“As the days passed, I managed to adapt to my new situation. I lived with my husband a normal life. There were no problems between us. I was very happy with my children, and I counted the days and months to see them grow.”

She got a rude awakening five years ago when she was suddenly transformed from a housewife and mother into a woman neither married nor divorced. “My brother divorced his wife, and in retaliation my husband abandoned me and took my children away,” she said.

She fought back, filing a lawsuit to demand a divorce and to get her children back. She returned to her family house, but has not seen her children since. She continues to wait for a verdict from the court, one of  thousands of Yemeni girls who forced into exchange marriages that end their childhood and education, and too often lead to divorce and loss of their children. 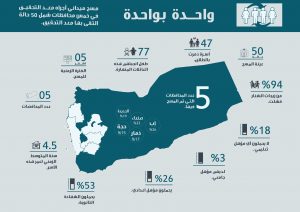 A survey of 50 marriages over five months (38 men and 12 women) in five of the 22 Yemeni provinces found that only three succeeded while 47 other families disintegrated; half that number ending in divorce. The survey counted 77 children affected. The survey, conducted between May and November 2017, found that the exchange marriages lasted for four and a half years on average. Women were left uneducated, with 53 percent of those surveyed holding a high school diploma, 26 just a secondary school certificate, and 18 percent with no certificate at all. Only 3 percent obtained a university degree. The sample was distributed among Ibb province (26 percent), Sana’a (23 percent), Al Hudaydah province (19 percent), Dhamar (17 percent), and Hajjah province (15 percent).

In the city of Abs (250 kilometers north of Sana’a), Aisha, 19, was forced to marry her 26-year-old blind cousin, Ahmed, three years ago, in exchange for her brother’s marriage to his sister. Today she lives a dire life. Aisha only agreed to speak to a reporter after he promised not to record her voice or video tape her. “My father signed the marriage certificate under pressure from my uncle who had loaned him some money… I could either agree to marry and destroy my life and all my dreams, or let my father face my uncle’s fury,” she said. “Under duress, I agreed to marry, but I was hoping to die. On the night of our marriage, I felt he was a monster and not a life partner, and I was sobbing. I contemplated suicide, but I didn’t.”

Comparison to Another Arab Country

Exchange marriages are not unique to Yemen. They were common also in Jordan’s tribal society until recently when the rapid development of social institutions—especially the family—a rising level of education and people’s movement from the desert and countryside into cities led to their demise, according to Hussein Mahadin, from Mutah University’s Department of Sociology. He also counts tribal ties, media awareness campaigns, the rule of law, the emergence of economically independent women in the labor market, and diversity as a result of migrations into Jordan as factors that ended the marriages.

Aisha’s marriage is one of only a few recent. “… I live with my husband a normal life that is devoid of any emotions, but the child that I gave birth to makes it more bearable for me and makes me somewhat happy.”

In the Zabid district of Al Hudaydah (266 kilometers west of  Sana’a), 51-year-old Obeid Saeed Mahbub married this way 27 years ago at the same time his 13-year-old sister married his wife’s brother. Ten months later Obeid’s sister separated from her husband. He was 11 years older than her and disagreements between them often ended with her being assaulted. But within days of their separatation Obeid was surprised by his wife’s family asking him to divorce her. He refused but was forced into divorce after his in-laws attacked him repeatedly, prevented his wife from going back to his house, and confiscated her jewelry. The family refused mediation, even though,

Obeid said he and his wife loved each other and didn’t want to part.

One Mistake is not Enough

Many young people find exchange marriages easy, but later realize the magnitude of their mistake when faced with divorce. A.M, who lives in Sana’a, did not learn from experience and entered into a second exchange marriage. The 65-year-old was first married in 1970 to his brother in law’s sister, under pressure from his father. “I lived with my wife a stable and happy life for two whole years. I loved her so much and hoped that God would give us children,” he said. Instead when his sister returned to her father’s house to ask for a divorce, he heard from tribal mediators sent a few days later by his father-in-law. They wanted to talk him into a divorce. “because I married her in exchange for my sister’s marriage to his son; one for one,” he recalled. “I do not know what happened to my ex-wife, but I wish her happiness with her husband and children if she remarried and gave birth.”

Within a year A.M remarried in another exchange brokered by his father and including his sister.

He lived with his new wife for a year before problems developed and they divorced. This prompted his father to demand the divorce of his other child as well.

Although her husband refused, insisting that he was not responsible for the failure of their siblings’ marriage, months of pressure from intermediaries forced him into divorce as well.

Young Yemenis are victims of unemployment and the high dowries that can go as high as 1.5 million rials ($5,000) in a war-ravaged country where the per capita income is estimated at $1,250 per year by international economists.

“Experience has shown that many exchange marriages have failed,” said A.M. “The prevalence of exchange marriages in rural communities is due to illiteracy, low status of women, high levels of poverty, youth’s inability to make their own decisions, and their unawareness that it violates Islam.

Personal status lawyer Hamid al-Hujaily, lists the shortfalls of exchange marriages, and compares them to a ticking bomb that may explode anytime destroying intertwined marriages, and happy families.

A hadeeth in Sahih Muslim says: “There is no Shighar in Islam.”

The same reference quoted Abu Hurairah (may Allaah be pleased with him), as saying: “The Messenger of Allaah (peace and blessings of Allaah be upon him) forbade Shighar”.

Ibn Numeir added: “Shighar is for one man to say to another: ‘Let me marry your daughter and I will let you marry mine, or your sister and I will let you marry my sister.'” A group of scholars cited the reasons why it is considered corrupt, including Shawkani’s Neil al Awtar, which is the absence of a dowry. Without money, the woman is merchandised and considered to be the dowry.

“Shighar treats women like a commodity that can be exchanged for another commodity, and what is even more dangerous is that the success of one of the marriages depends on the success of the other, particularly in the first years of marriage,” says sociologist Abdul Karim Ghanem. All this “threatens the family entity with separation and undermines the stability that children need…”

The Yemeni law does not include any clauses that prohibit exchange marriages, but it obliges the parties to agree on a dowry that should be registered along with the marriage, according to the first paragraph of article 33 of the Personal Status Law No. 20 of 1992 and its amendments.

“The dowry that was agreed upon, whether money or benefit, in a valid contract is required. If it was not properly specified or its amount was forgotten then it is necessary to have a dower of the like.” The second paragraph states that “the dowry belongs to the woman who shall use it as she wishes and any condition otherwise is considered null and void.” However, many Yemeni families bypass this by specifying a fake dowry in the contract.

Article (39) of the same law allows a woman to refrain from “joining her husband until he agrees on a dowry and delivers the amount that hasn’t been postponed. If it is delayed for a certain period of time or according to customs, then she should not abstain before the deadline.” However, Yemeni women, who live in a patriarchal community, are unable to make such a decision. This is also due to illiteracy and lack of legal awareness among most women.

Family lawyer Hamid al-Hujaily regrets the absence of a legal provision criminalizing this phenomenon and punishing the perpetrators. Al-Hujaily demands adding clauses to the Personal Status Law that prohibit exchange marriages and include clear penalties. He also recommends a  law prevents a man from divorcing his wife if the other marriage fails, and includes financial penalties for those who violate the law.

Al- Hujaily assures that such cases do not go to trial except in exceptional cases. Lawyer Akram Noman agrees: “Most of the cases that go to trial are annulment, divorce or inheritance claims, and it appears later that they were issues resulting from exchange marriages”.

This investigation was completed with the support of Arab Reporters for Investigative Journalism (ARIJ) with coach Khalid AlHarouji.