Mohammad Fahem is one of Yemen’s prominent businessmen, His rivals and compatriots have given him the nickname “Emperor of Wheat”, because his company, the Yemeni Company for Industrial Investments LTD, is one of seven leading firms that import 90% of the country’s annual needs of this vital commodity, according to statistics by the Sana’a Chamber of Commerce and Industry.

Yemen is repeatedly mentioned in international reports as one of the poorest countries in the world. But the leaked Panama Papers obtained by Alaraby Aljadeed through ICIJ, Germany’s SZ newspaper and Arab Reporters for Investigative Journalism (ARIJ), has revealed scores of Yemeni politicians and powerful individuals like Fahem who have hidden their assets in tax havens through offshore holdings.
This investigation has uncovered the hidden money trail of Fahem, who has possibly used these tax havens to hide money that he may have been obtained illegally.
Hiding the money away
In 2015, the name of Mohammad Fahem appeared for the first time in the leaked list of HSBC senior clients, known as the SwissLeaks. The list included statements belonging to secret banks accounts leaked by Hervé Falciani, former HSBC employee, to French authorities. The leaks showed how the bank helped customers hide their money and avoid taxes in their countries.

Alaraby Aljadeed reveals for the first time the contents of these leaks involving Yemeni names, such as Mohammad Fahem and members of his family, in addition to fifty other Yemeni names whose HSBC accounts were linked to other accounts used by offshore companies in tax havens that give their customers a lot of secrecy privileges and impose nominal taxes or no taxes.
Due to the high flexibility as well as the difficulty of tracking transactions in tax havens, the accounts were used for many purposes including money laundering, tax evasion, and concealment of funds from the eyes of the authorities in the home countries of the bank’s customers, according to investigations by Swiss tax authorities that resulted in the bank being fined.
The documents showed that Mohammad Fahem opened an account in the bank in 1998 in which he registered his profession as chairman of the Abdullah Fahem company. The same document shows the movement of funds and dates of transactions from and to the account which Fahem continued to use in his transactions until mid-2007. One of the transactions was worth $22 million.
The facilities provided by HSBC helped Mohammad Fahem link his accounts to other accounts in the same bank, as documented by this reporter. Those accounts belong to Fathi Fahem, brother of Mohammad Fahem, chairman of the board of the Yemeni Power Company LTD, established jointly between the Yemeni Company for Industrial Investments LTD (51%) and the Yemeni government (49%) to develop electrical projects led by the Maabar Gas Power Plant.
That project was suspended because of legal flaws in the company’s bylaws. The file was referred by President Abed Rabbo Mansour Hadi in 2013 to the Ministry of Legal Affairs to review the project, according to the Yemeni Ministry of Electricity.
The account was also linked to other accounts belonging to members of Mohammad Fahem’s family, Nabil, Ahmad, and Abdullah, and another account belonging to a Lebanese woman named Huda Mansour Qassis, opened in 1999.
Qassis, who noted her profession as housewife in the bank forms, moved funds through her accounts on different dates, including deposits and withdrawals between her account and the account of Mohammad Fahem. Another account linked to her account belonged to a Michael Qassis.
Hervé Falciani, the man behind the leaks, stated: “When you go to tax haven banks, you are dealing with something of a mystery, because you have many ways which you can use to hide what you have. You can buy representatives, you can ask people to be identified as beneficial owners of the account, you can hide behind a lawyer to register the account in his name while you hide under a false name.”
Wheat and offshore companies
Offshore companies are not only used for tax evasion and concealment of funds, but also give other facilities. For example, they can be used to apply to government tenders by posing as foreign shelf companies, and can be used in fake consultation contracts to avoid sales taxes, issue bills, or produce fake records issued by an intermediary company to apply for government paperwork.
According to a Yemeni customs experts who asked not to be named:“The identity of the country of origin can be manipulated by using offshore companies, for example by using documents that show the origin of a shipment loaded on a ship (A) is the US and that the intermediary company (an offshore company) had sent to Cyprus bound for Yemen on ship (B). The shipment then enters using official documents showing the imported items are American and marketed and sold accordingly, which gives a higher profit margin because of the difference in standards and quality.”
The Yemeni Ministry of Transport represented by the Red Sea Ports Authority, had blocked in June 2013 the ship Sam John Liberty belonging to the Yemeni Company for Industrial Investments headed by Fahem from unloading its shipment of 65,000 tons of German wheat in the port of Salif. In July of the same year, the Authority stopped the unloading of the ship Captain Ivan Jelios N M carrying 55 thousand tons of US wheat owned by the same company, according to a statement issued by the Yemeni Company for Industrial Investments. 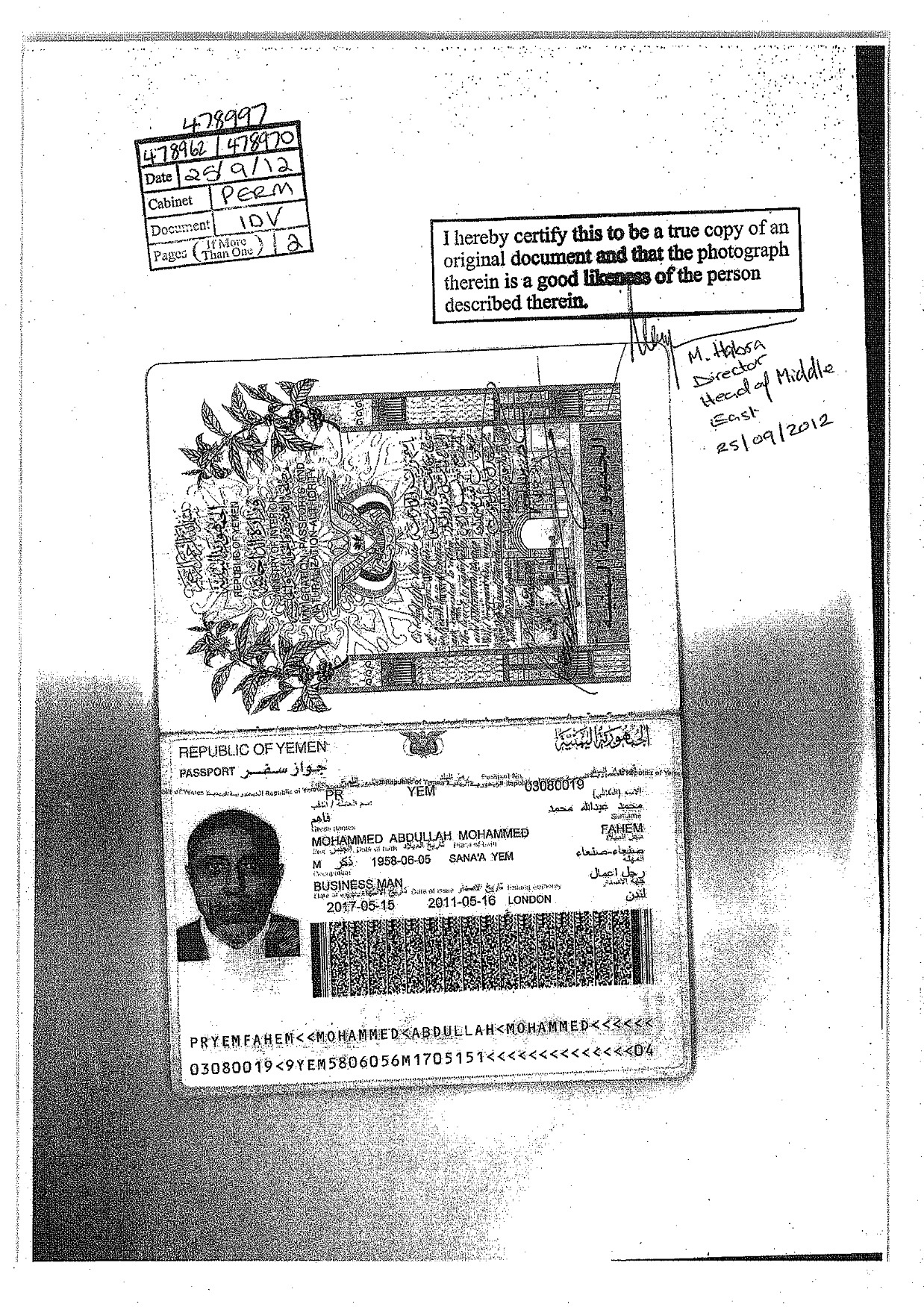 There were several reasons for this, according to the Yemeni Company for Industrial Investments. The Port Authority said the shipment did not conform to specifications and hence illegal. This claim was refuted by the Yemeni Company for Industrial Investments, which claimed the port authority was being intransigent according to an official letter sent by the company. However, the port authority said on July 7, 2013 that the activities of the company were suspended in the port and silos in Salif to “protect public funds” according to an official statement.
This reporter compared wheat imports and total imports into Yemen in 2013 through UN data retrieved from international official entities involved in the export and import of Yemen. The data showed that Russia in 2013 exported to Yemen similar quantities of wheat to the ones that appeared on the Captain Ivan Jelios N M, which the company said was American wheat. According to an economic expert, the price of wheat differs in accordance to the country of origin: the price of one ton of US wheat stood at $315 in 2013 compared to $209 per ton of Russian wheat.
Offshore companies
The HSBC accounts were only one of many complex financial tricks the Yemeni “Emperor of Wheat” used to move his money through offshore companies. In the Panama Papers leaked from Mossack Fonseca, Fahem was shown doing business with a number of his family members including his daughters Iqbal, Amal, and Ashwaq using offshore companies.
Between 2009 and 2014, Fahem registered three offshore companies according to the documents obtained by the author, in the British Virgin Islands, linked to private offshore banks to facilitate financial dealings between companies, bank accounts, and the movement of funds between them.
One document describes the registration of an offshore company named Gloucester Land Limited in the British Virgin Islands on March 13, 2014, owned by Mohammad Fahem and his three daughters. The company has an office in London. Fahem did not use directors usually assigned by Mossack Fonseca to provide registration and administration services and hide the names of real owners. Instead, Mohammad Fahem and his daughter Iqbal were noted as the directors of the company.
A document signed and sent by Fahem on March 12, 2014 showed the original documents of the company and its holders are present in the area of Hadda, Sanaa, Yemen, with copies in the British Virgin Islands. The company has another office in Amman, Jordan. An invoice dated 15 March, 2015 was sent from Mossack Fonseca to the company’s address in Amman.
To complete the registration of the company, the Bank Societe Generale Offshore (London and Jersey) sent a memo dated 18 March 2014 confirming the addresses of Fahem and his three daughters in Sanaa for the company Gloucester Land Limited. 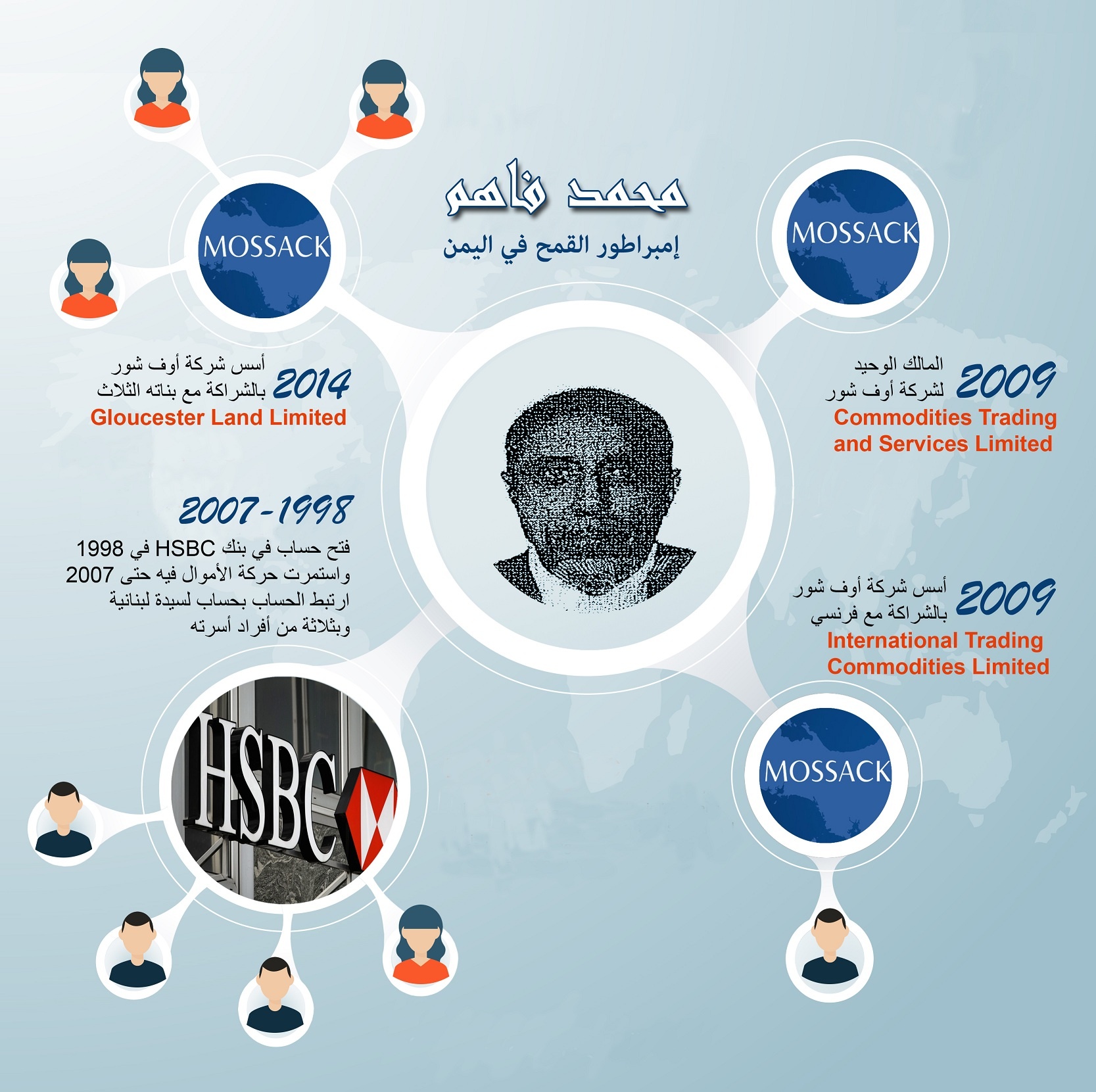 The documents show Mohammad Fahem as the sole owner of an offshore company named Commodities Trading and Services Limited on 9 November 2009 in the British Virgin Islands. The company continued to be active until late 2012, according to an invoice from Mossack Fonseca dated November 17, 2012.
A third company was registered on the same date as Commodities Trading and Services Limited, named International Trading Commodities Limited, owned by Mohammed Fahem and a French national named Ismail Fahmy, according to passport data accompanying the company’s registration documents. A document signed by Fahmy dated 9 November 2009 asked for Ismail Fahmy to be registered as the company’s director.
No response
This reporter reached out to Fahem via email to comment on the findings of this investigation. But no response came by the time of publication.
The hallmarks of the Wheat Empire in Yemen are thus to be found in banks convicted of helping their clients to avoid taxes and conceal funds via offshore accounts, their sole purpose often being money laundry and tax fraud under legal cover in tax havens.