Cairo, Oct. 27, 2016 (MadaMasr) – At 2 p.m. on Jan. 6, 2005, an employee at HSBC Private Bank Suisse SA concluded a phone conversation with a client and noted the following, “Sum amounting to $300,000 arrived into client’s account. I contacted the client to discuss ways to invest this money. The client informed me that she will be visiting Megève on 19 January 2005, a winter resort about 70 kilometers from Geneva, where the branch is located. If time permits, she will call at the bank from Megève.”

Bank records state that the client is a housewife and an Egyptian national. They show a home address in Egypt and landline numbers in Egypt and Britain, but no British address is provided. The record also includes instructions from the client, to keep all communication and bank records at the mentioned branch and not mail them to the client’s address.

This client was Naglaa Abdullah Al Ghazarley, wife of then Tourism Minister Ahmed Al Maghrabi. Al Maghrabi also served as  Minister of Housing. He also had been a board member of HSBC Bank Egypt SAE.

Al Ghazarley had two secret accounts in HSBC Private Bank Suisse SA holding a total of $3,870,357 between 2006 and 2007, as revealed by what the media has called the “Swiss Leaks.” The International Consortium of Investigative Journalists (ICIJ) shared these leaked documents with  Amman-based Arab Reporters for Investigative Journalism (ARIJ).

Al Ghazarley escaped the Egyptian authorities’ decision to freeze her accounts after the revolution of January 2011. She was also not among the officials’ wives whose Swiss bank accounts were frozen by request from Egypt.

This investigation documents how  Al Ghazarley was able to continue managing her assets and start a company in Britain after 2011, despite the decision from the UK and the EU, with the exception of Switzerland, to freeze her and her husband’s assets. She closed down the company when the Swiss Leaks emerged in 2015. The leaks of HSBC Private Bank, Switzerland included more than 60,000 documents. They show that the bank helped some clients in hiding their assets through secret accounts, some of which was used for money laundering and tax evasion.

Egypt came in 20th on the Swiss Leaks list with more than 1,400 accounts for more than 700 clients with a total investment of $3.5 billion. Egypt’s Swiss Leaks list showed records of former ministers, businessmen and public figures including Al Ghazarley.

In the midst of the 2011 turmoil, former President Hosni Mubarak tried to calm the situation by dismissing Ahmed Nazif’s government on Jan. 29, 2011. But the protest continued.

The Public Prosecutor’s order included seizing of funds and assets belonging to Habib Al Adly, former interior minister, his wife Ilham Sharshar, and his son Sharif. However, the decision to seize assets belonging to Al Maghrabi included only his personal assets and bank accounts, exempting his wife, Al Ghazarley.

Just hours after Mubarak stepped down on Feb. 11, Switzerland announced that it was going to freeze assets of 12 individuals, including bank accounts and property, estimated to be worth 410 million Swiss Francs, equivalent to $466 million at the time.

This list was updated Feb. 16 to include  Ilham Sharshar, wife of former interior minister Habib Al Adly and their son Sharif. The list, however, overlooked Al Ghazarley.

At the time, Swiss authorities did not disclose the value of frozen assets under each name, but they did ask Egyptian authorities to conduct fair investigations and trials to prove that the referred-to assets in Switzerland were obtained through illegal means or as a result of corruption in order for Switzerland to return those assets to Egypt. The freezing of assets ran for a renewable duration of three years to give Egyptian authorities  time to present enough evidence.

On Feb. 17 under orders of the Public Prosecutor, Egyptian authorities put Ahmed Al Maghrabi and a number of government officials and ministers in detention for 15 days while they were being investigated for corruption, profiteering, and squandering public funds.

On Feb. 22, 2011, the Public Prosecutor issued eight new decisions to freeze personal accounts and assets of Al Maghrabi and  Al Ghazarley. Despite this, Egyptian authorities did not ask the Swiss authorities to add them to the list of names whose assets should be frozen.

On March 22, the EU announced that it was freezing all assets in its possession of 19 individuals, including bank accounts, stocks, bonds, and property. In addition, the EU barred persons on that list from all economic exchanges and services such as starting a company, renting or buying, or using services, deposits or merchandise.The housing minister and his wife were on the list. Britain announced on the same day that it too would freeze assets of people from that list.

On April 26, 2011, Egypt’s Illegal Gains Department barred Al Maghrabi and Al Ghazarley from traveling or from accessing or using their movable, immovable and cash assets while under investigation. Both were being investigated over accusations and reports from monetary bodies that the former minister had accumulated wealth that exceeded his legal income by abusing his public office, first as tourism minister then as housing minister.

The former minister signed a concession for the Illegal Gains Department to divulge confidential bank account details for himself and his wife in Egypt and abroad. The Department put Al Maghrabi under arrest for 15 days pending investigations.

The North Cairo Criminal Court convicted the former minister of profiteering and squandering public funds and sentenced him on  May 26 to five years of hard labor. But no actions were taken to retrieve assets from abroad. 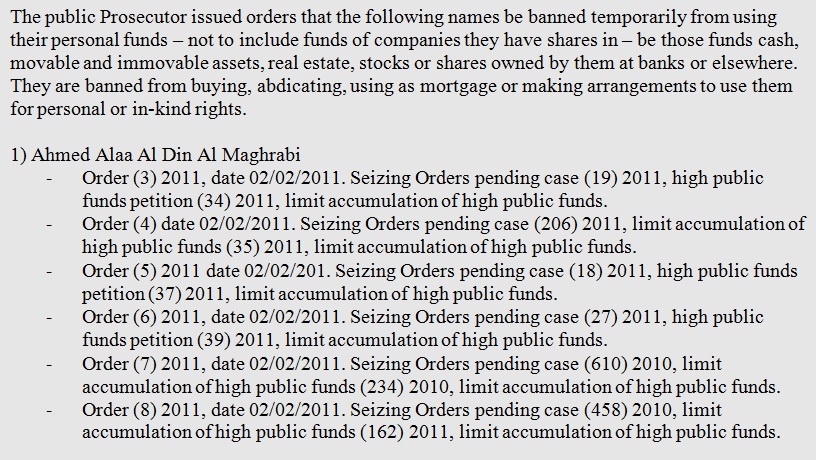 The documents obtained from Al Ghazarley’s confidential accounts show transactions each worth hundreds of thousands of dollars even though her registered occupation with the bank was “housewife.”

Leaked documents also include notes from the bank employee about a phone conversation Nov. 10, 2005, stating that Al Ghazarley requested a transfer of $117,000, interest revenues of Al Ghazarley’s deposits in dollars and euros, on the same day those revenues were due on Dec. 15, 2005. This was less than a month before her husband Ahmed Al Maghrabi moved from being the tourism minister to housing minister, a position he held from January to November 2006.

According to Egypt’s Law (62) of 1975 on illegal profiteering, the minister is obligated to present a statement of his financial status and those of his wife and minor children. The statement should include all fixed and movable assets including bank accounts in Egypt and abroad within two months from him taking office.

The appointing of businessmen as ministers in Nazif’s government was criticized as that raised suspicions about conflict of interest between their businesses and their positions as civil servants.

Despite the banking and legal actions against the couple, Al Ghazarley still managed to travel to the UK and start a private company in her name in November 2011. This happened concurrently with her husband’s five-year sentence for profiteering and abusing public funds. According to documents posted on Britain’s official company registration website, ‘Essential Designs by Nejla Limited’ was registered on Nov. 1, 2011, to its sole owner – Al Ghazarley.

The company is located at Astell Street, London, SW3 3RT, 5 in the Borough of Kensington and Chelsea, one of the wealthiest areas in London. The building is not a commercial address but Al Ghazarley’s residence.

It is registered to Sharif Amin Abdul Maksoud Al Maghrabi, her brother-in-law, who was not on the list of persons whose assets were subject to freezing.

Egyptian authorities moved slowly towards the “returning of smuggled funds” by forming committees whose members roamed around foreign countries searching for ways to restore frozen funds and assets abroad. They made no noteworthy progress. In the meantime, Ahmed Al Maghrabi and his wife hired a team of foreign lawyers to raise counter lawsuits against decisions to freeze their assets on the basis that Egyptian authorities failed to provide any incriminating evidence and made efforts in Egypt to overrule court decisions and to request a retrial in preparation for an acquittal. 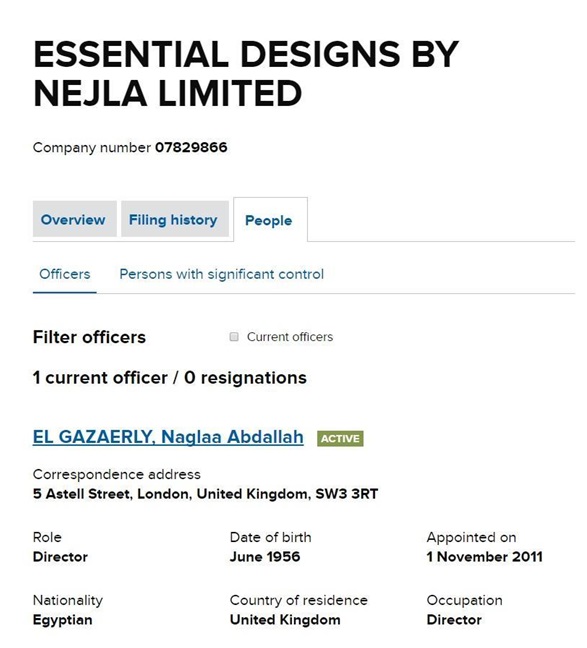 (the first page of the company registration document. Click on the image for higher resolution.) 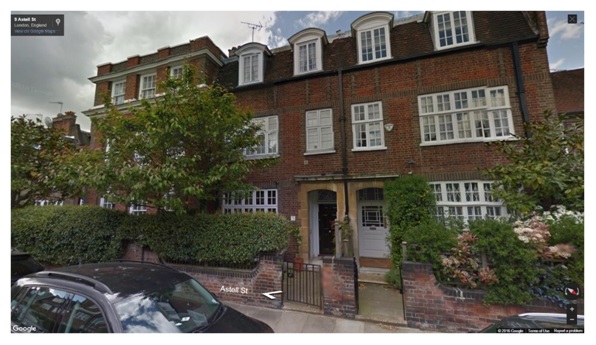 It also appears that the British landline phone number on Al Ghazarley’sHSBC secrete account records in Switzerland belongs to the same address. 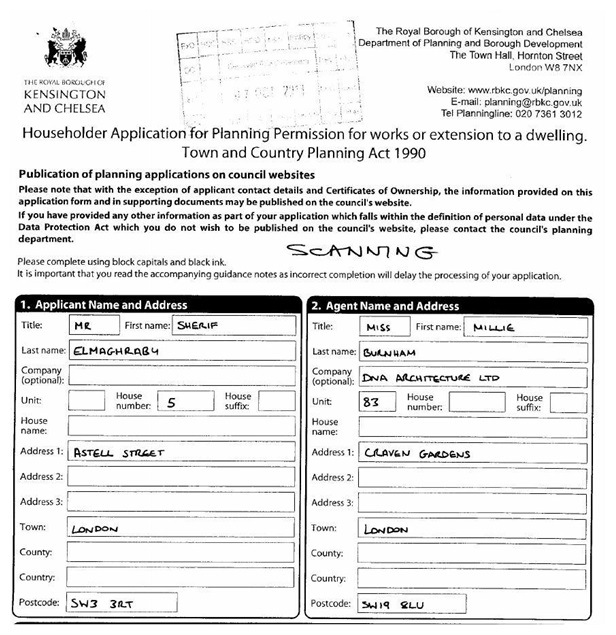 (The deed to the house of Sharif Elmaghraby. Click on image for higher resolution)

On May 2012, a court ruling in Switzerland decided the Mubarak regime was “an entity practicing organized crime.” This allowed Swiss authorities to apply the concept of “reverse logic to prove a crime”. This meant all frozen assets and funds are considered to be obtained illegally, and thus it is up to the owners of those funds to prove differently. This step came as a method to facilitate Egypt’s access to its embezzled funds abroad and give Egyptian authorities more time to conduct its investigations and trials.

The EU rejected the appeal from Al Maghrabi and his wife to unfreeze their assets in June 2013.

As for their efforts inside Egypt, the court accepted the request to overrule a former decision on the case of profiteering and squandering public funds .

The court also accepted an appeal for a retrial in a number of cases of profiteering and squandering public funds. Over the course of 2015, the Egyptian Court of Cassation issued a final judgment acquitting Al Maghrabi in a number of profiteering and squandering public funds cases, including the one in which he received a five-year sentence. But on Nov. 3,  2015 the Court of Cassation accepted the Public Prosecutor’s appeal to challenge the acquittal of Ahmed Al Maghrabi on the basis that he was the tourism minister and that he and others were to be charged with the profiteering and abusing public funds in the case known to the media as “the Royal Company land case.” The court decided on a retrial in a new court.

Despite this, Swiss authorities issued a decree in May 2016 to continue to freeze assets belonging to members of Mubarak’s government. This decision became official on 1 July 2016 till February 2017.

On Aug. 30,  2016, after Swiss authorities extended the freezing of their assets, a national commission to return assets and funds smuggled abroad, headed by Public Prosecutor Counselor Nabil Sadek announced the decision to form a small technical committee of public prosecutors and members of judicial and monetary bodies. It was to prepare a comprehensive file of corruption cases against former president  Mubarak, his family, and leading figures in his administration. This was done in preparation to hand a new file to Swiss authorities in an effort to retrieve the funds.

The committee for financial integrity estimates the illegally obtained funds smuggled out of Egypt between 2004 and 2013 reached $39.8 million, and of those $13.8 million were smuggled between 2011 and 2013.

Questions were sent to Al Maghrabi and to Al Ghazarleyvia via DHL to their home address listed on Al Ghazarley’s bank details on Swiss Leaks, along with the writer’s contact details in order to give them the right to comment on this article, with a deadline of Sept. 30, 2016. According to DHL, the documents were received on Sept. 21, 2016. No reply has been received to date.

This investigation was completed with the support of Arab Reporters for Investigative Journalism (ARIJ) -www.arij.net