The Mysterious Company of a Former Minister’s Son

By Mohammad Mahdi
Sana’a, Yemen, June 2, 2016 (Al-Araby Al-Jadeed) – Is there any reason for a government employee to own an offshore company? Could there be a reason, besides tax evasion or an attempt to conceal illegally obtained funds?
These are the questions this reporter had to ask when researching files obtained by the International Consortium of Investigative Journalists (ICIJ) and the South German Newspaper (SZ) through the Amman-based Arab Reporters for Investigative Journalism (ARIJ). These same questions were used to uncover the financial dealings of Abdul-Hafez Al-Alimi, the son of the former deputy prime minister of Yemen and currently one of the President’s advisors.
Former deputy prime minister of Yemen
In 2011, the European Union discussed the freezing of overseas portfolios and interests belonging to former President Ali Abdullah Saleh’s regime after the outbreak of the Yemeni revolution. Among those interests were those belonging to Rashad Al-Alimi, who was later listed as holding €85 million and $300 million in various German banks, according to both Yemeni opposition groups and Transparency International.
Rashad al-Alimi was a regular figure in the Yemeni government, having filled various important positions between 2001 and 2012. His roles included those of Minister for the Interior, Minister for Local Administration, Deputy Prime Minister and head of the Supreme Security Committee. Seen as a member of the inner circle of former President Ali Abdullah Saleh, their relationship ended when Saleh stepped down from office. Later, Al-Alimi would side with new President Abd-Rabbu Mansour Hadi while Saleh sided with Houthi rebels.
The various assets frozen by the EU were released in November 2011, when the Gulf Cooperation Council (GCC) negotiated the resignation of the Saleh regime. In exchange for his resignation, he and his affiliates would receive immunity from legal prosecution.
This was noted in item No. (3) of the GCC’s Gulf Initiative, which stipulated that “the House of Representatives approves the decision to grant immunity from legal prosecution to president Ali Abdullah Saleh, his aides and supporters.”
Father & Son
In 2006, Yemen issued Law No. (30), a new legislation regarding financial disclosure. The ruling came after pressure from the World Bank and the European Union to initiate and pass economic reforms and to fight corruption.
Two years after that law was passed in April 2008, Rashad al-Alimi (then deputy prime minister as well as interior minister) disclosed his financial assets and investments. This came in response to 1,710 cases provided by officials in various state agencies – to the country’s anti-corruption body. These included his properties and bank accounts at home and abroad, the source of these properties and bank accounts.

List of shareholders in the offshore company Harvest Resources Investment Co., LTD.,
After his father submitted his financial disclosure to the Anti-Corruption Commission, Rashad al-Alimi’s son Abdel Hafez created an offshore company — “Harvest Resources Investment Co.LTD” in June 2008. An engineering graduate, Abdel Hafez has enjoyed a rapid rise in his government career. Over a very short time he quickly became Director of Supervision at the Ministry of Oil and Minerals before taking on the job of Deputy Director of Technical Affairs for the Ministry’s subsidiary in the Yemen Oil and Gas Corporation (YOGC). He was named to both jobs while his father served as interior minister.
(Insert Harvest Resources Investment Pictures)
Distribution of Stock
During his tenure as Deputy Director for YOGC – the company responsible for the storage and distribution of petroleum products for the domestic market and importing from abroad – various tenders were issued and were marred by accusations of corruption by the National Authority for Combating Corruption. The latter accused the YOGC of manipulating the import standards for oil derivatives. 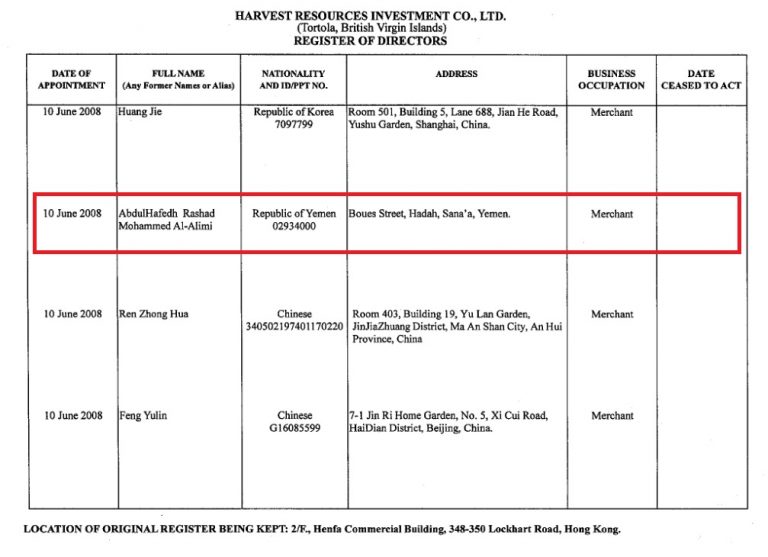 Document certifying Abdul-Hafez’s naming as Deputy Director to the HRI Corporation.
Offshore companies are companies based in a country not that of its investors, usually a low-tax, lightly regulated region. As part of such practices, these companies are spread logistically across several countries in order to keep their financial dealings and information as difficult to uncover as possible.
Harvest Resources Investment was one of those companies. It was founded by Abdel Hafez al-Alimi and registered in the British Virgin Islands, but based in Hong Kong, where it was overseen by nationals of China and Yemen.
Registered as it was in the British Virgin Islands, the company would not have had to pay capital gains tax, gift tax, sales tax or value added tax, profit tax, inheritance tax, estate duty, or corporation tax. As well, income tax in the Islands is set at 0%.
Records show that as a government employee, Abdul-Hafez al-Alimi, listed his occupation as “merchant” in the registration papers of Harvest Resources Investment. Other documents showed the transfer of the company headquarters from the British Virgin Islands to the Chinese city of Hong Kong, done in conjunction with three Chinese citizens known as Huang Jie (President of HRI), Reng Zong Hua and Feng Yulin.
These three individuals owned equal shares in HRI alongside Abdul Hafez, according to information gathered by this reporter. It showed that they voted in Abdul Hafez as Director on 10/6/2008.
Other information we discovered included a copy of Abdul-Hafez’s Yemeni passport as well as the HRI’s local address on Boues Street in the Hadah neighbourhood of Sana’a, Yemen 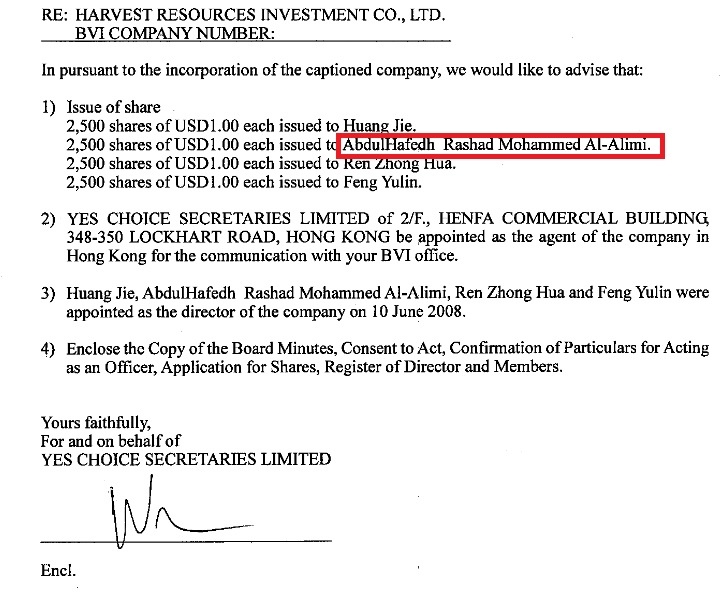 A document signed by Abdel Hafez al-Alimi to complete the registration of HRI.
A revision of records of registered companies at the Ministry of Commerce and Industry showed that HRI did not exist in Yemen and had not been among the companies registered during 2008. This itself means that the address and information previously provided by Abdul-Hafez was false or a cover to register the company overseas or to use it for domestic tenders or bank transfers between Yemen and the likes of the British Virgin Islands and Hong Kong. It may have also been used to maintain financial ties with Chinese bidders operating in Yemen, despite his father’s financial disclosure a few months earlier. 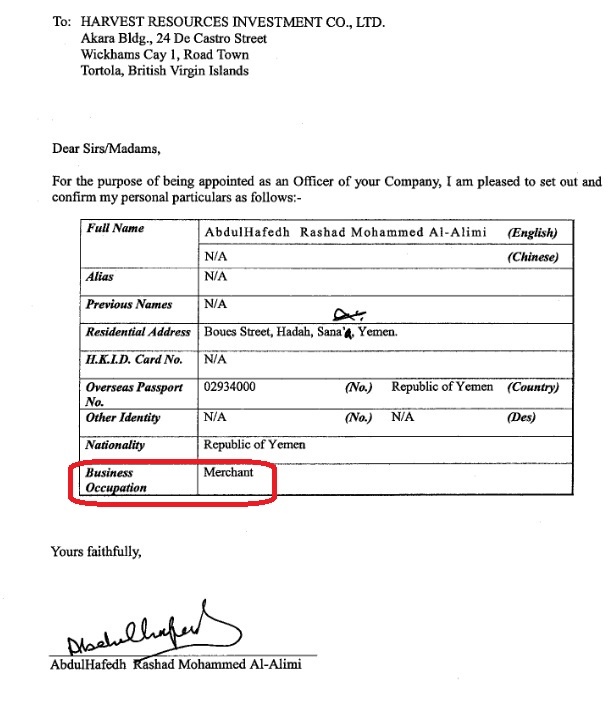 Minister of Oil
Yemen’s President Abd Rabbuh Mansur Hadi rejected the inclusion of Abdul-Hafez as Oil Minister while forming his national unity government in 2014. Hadi’s consultations with all parties before he formed the government showed the need for the oil minister to be an independent personality. This was despite support from the General People’s Congress Party, who insisted on his nomination despite Abdul-Hafez being quite young and lacking the needed professional experience. 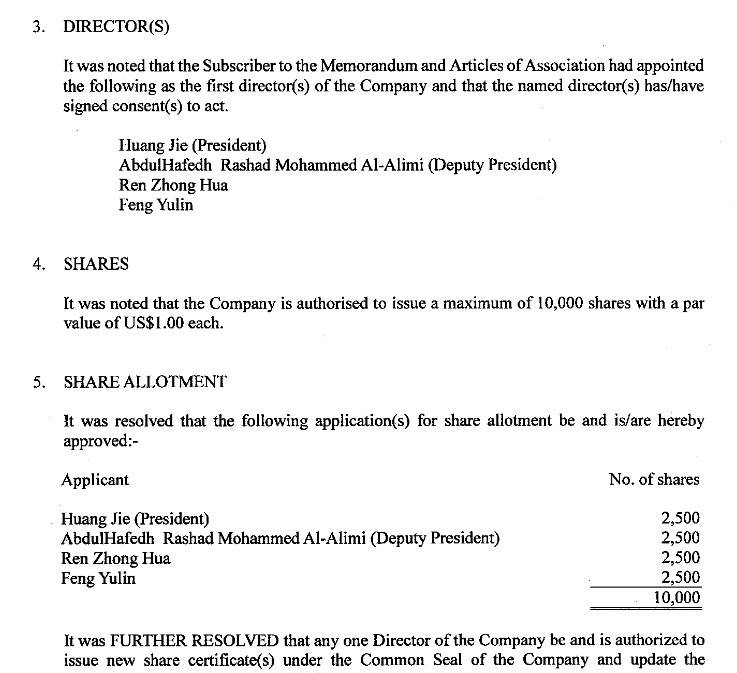 When this reporter inquired about President Hadi’s decision to reject Abdul-Hafez, a senior official who requested anonymity stated that Abdul-Hafez’s nomination had been rejected because his predecessor, Ali Abdullah Saleh, wanted to keep control of the Oil and Minerals Ministry and its subsidiaries that are exporting and importing oil. Were he to have appointed Abdul Hafez, then no cases related to oil production or allegations of corruption would be opened, as a favor to Ali Saleh.

No Comment
Prior to the publication of this investigation, Al-Araby Al-Jadeed reached out to Abdel Hafez al-Alimi to offer a response to everything uncovered in this report. However, no comments were made to the questions sent to him along with a deadline for receiving answers. Hence, questions remain regarding laws that made it easier for government employees to set up offshore companies in “tax havens” that protect the identity of customers and their properties.
This investigation was completed with the support of Arab Reporters for Investigative Journalism (ARIJ) – www.arij.net — and translated into English by Nicolas Awad.