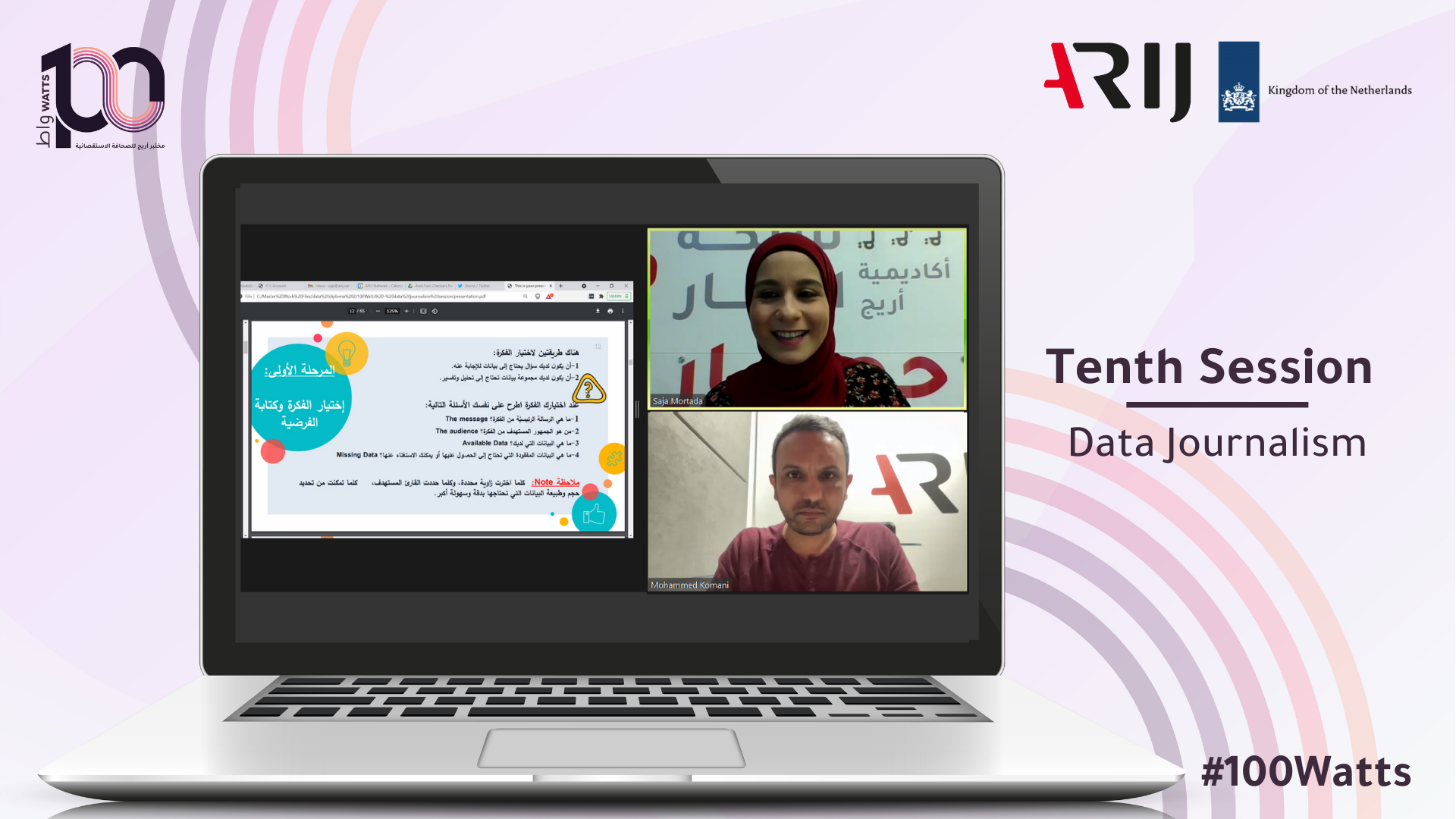 The concluding webinar in the “100 Watts” project addressed the basics of data journalism, and how it is utilized in digital storytelling.

“100 Watts” is a three-year project launched by ARIJ and supported by the Embassy of Netherlands in Jordan. In its first year, the project aims at training more than 100 journalists, content creators, journalism and media students, and professors on audio storytelling “Podcast”, to address vital societal issues in Jordan and promote accountability and reform.

The session, held on 8 September 2021, was delivered by Investigative & Data journalist, Saja Mortada, and was moderated by ARIJ’s journalist and trainer Mohamed Komani.

Mortada emphasized that data journalism doesn’t require a programmer or a data specialist, rather any journalist can work in this field. She pointed out that now more than ever it is essential to know about data journalism and utilize it. Mortada argued that we live in a digital world now and there is a heavy flow of information and having access to this information is easier than ever, and added that data journalism saves time, assists journalist in presenting their stories in an attractive way and sheds the light on different angels of the journalistic story that couldn’t have been noticed without data!

The data journalist compared traditional journalism and  data journalism. She explained that traditional media answers the six w’s “where, when, who, how, what and why?”, while data journalism digs deeper, to understand the size of the problem that occurred in a specific period of time and comparing it to show the damage extent or to figure out who is responsible for it.

Mortada discussed the challenges journalists face to gather data in the Arab world but said “No data, no problem.. you can always find a way”. She enumerated various ways to collect data such as the web, social media platforms, research centers and international organisations data bases. She also elaborated on the different stages of writing a data driven news story, beginning with finding an idea and formulating the hypothesis. After the first stage, journalists move on to collecting, verifying ,scraping, cleaning and analyzing data and eventually writing the story and presenting it in an attractive way. In the end of the session, Mortda stressed that having the passion for data is one of the most important skills data journalists should have.