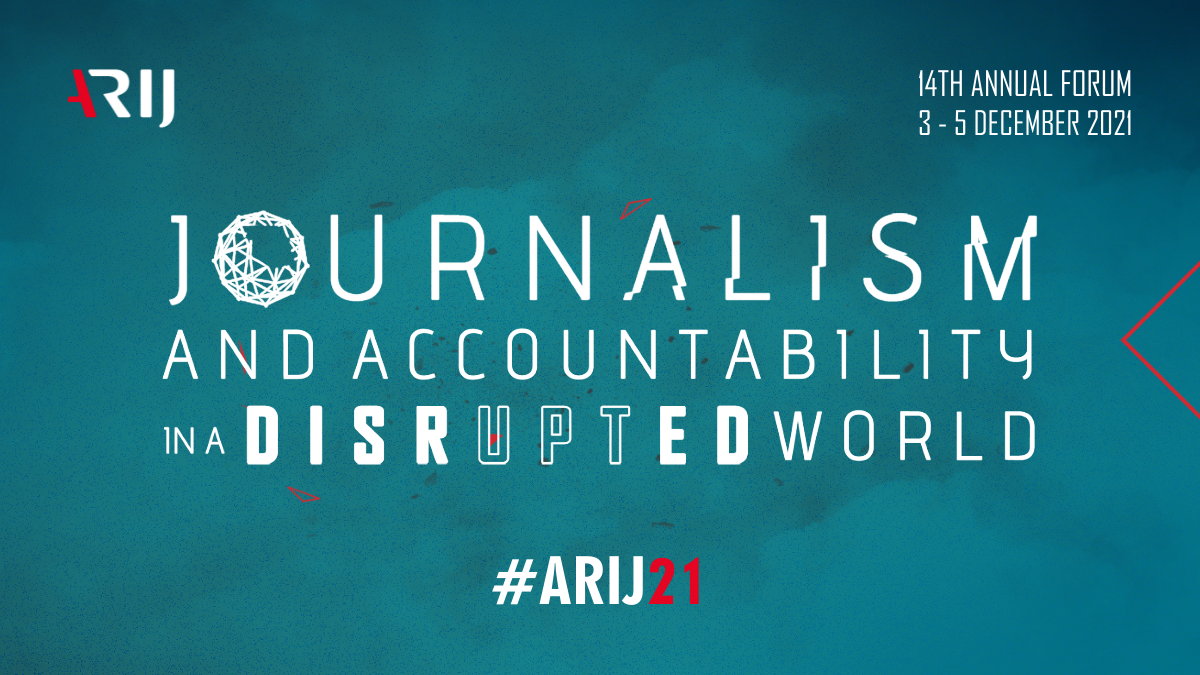 AMMAN – More than 100 speakers and 3700 journalists and media practitioners registered to attend the launch of ARIJ’s annual forum in Amman, Jordan 3-5 Dec, 2021. The theme for the largest forum for investigative journalism in the Arab world in its fourteenth edition will be “Journalism and Accountability in a Disrupted World”, and will be held virtually for the second year due to Covid-19 restrictions worldwide.

The limited face-to-face opening ceremony will be held under the patronage of their excellencies the Ambassadors of Sweden and the Netherlands in Amman, on Friday Dec 3rd. This will be an opportunity to showcase ARIJ’s new projects for 2022, including the expansion of ARIJ’s support for investigative reporting throughout the Arab world, The new Arab Fact Checkers Network, an improved and more focused protection projects for male and female investigative journalists, ARIJ’s 3rd Diploma in Data Journalism, ARIJ’s Fellowships for 2022, and the second phase of the “I Will Not Be Silent” project.

Pre-Forum activities started in late October 2021, with a series of training sessions, webinars, safety clinics, and a virtual exhibition, with the contribution of over 60 experts and specialists in investigative journalism from around the world, and saw a large attendance exceeding  3,500, half of whom were women.

ARIJ Director General Rawan Al-Damen says: “Ours is a profession of trouble, but we believe in its importance, and its role in empowering societies and people to obtain their rights through the creation of an accountability sphere that promotes democratic practices and freedoms, despite all obstacles and adversities. It is unfortunate that the pandemic was used as an excuse in many Arab countries and around the world to restrict freedom of the press by stifling freedom of expression, breaking the pens of journalists, and restricting access to information.” She added, “What we are witnessing today is a partial media blackout in some countries, and a complete one in others, so our journalists are forced to publish and broadcast under pseudonyms to avoid political, social, and security pressures.”

The annual ARIJ Forum has grown to become a major regional and international networking and training platform, and an experiences and skills exchange hub between Arab and international media professionals. Over the years, ARIJ has provided training for more than 4,000 Arab journalists, and has supported the production of more than 700 investigative reports that won Arab and international recognition. In addition, ARIJ has launched initiatives, programs, and projects that support the journalism community in general and investigative journalists in particular, most notably the Arab Fact-Checkers Network launched last year.

For more information about ARIJ and the forum, visit the ARIJ website: arij.net