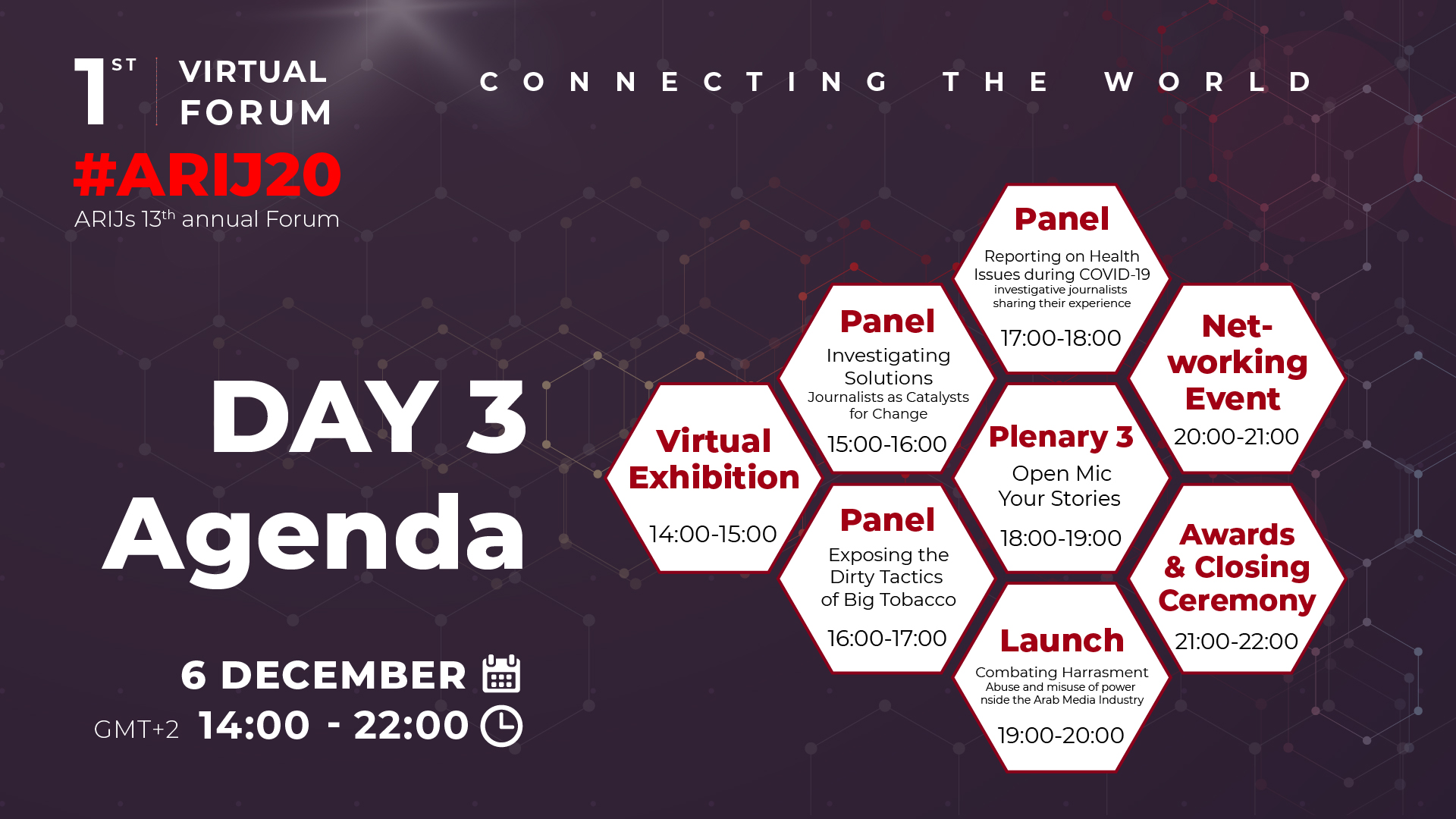 AMMAN — Journalists from four Arab countries — Yemen, Mauritania, Libya and Egypt — were awarded prizes for the best investigations published or broadcast in 2020 at the closing ceremony of ARIJ’s 13th Annual Forum. The awardees were selected from among dozens of investigations that revealed human rights violations, including lack of freedoms, and corruption involving government officials.

Ahmed El-Shamy won the Gold Award for his BBC Arabic-produced investigation, “The Coronavirus Gamble”, which revealed how Egypt purchased COVID-19 antibody tests from Canada to examine passengers and medical staff before they were approved by Canadian health authorities. He also uncovered how there was no record of the deal in the official Egyptian database of government contracts.

The Silver Award went to Mahmoud Al-Wakea for “The Weapon’s Power”, which exposed the route of Emirati and Turkish weapons into Libya in violation of UN resolutions prohibiting arms exports to the country.

ARIJeans Abu Bakr Salem and Wael Sharha shared the Bronze Award; the former for his investigation, “Death License: A Dream for Riches is Killing Dozens in Mauritania Amid Government Indulgence”, which documented the death of 160 Mauritanians after authorities granted them licenses to search for gold in the desert, and failed to provide safety mechanisms or support. Sharha shared the Bronze Award for his investigation “Eternal Hostages”, which explored how the divergence of legal courts violates the rights of inmates. The investigation revealed how a scarcity of judges, and equipment like handcuffs and vehicles, hinder litigation and the judiciary, leaving prisoners waiting in jail for their sentences.

This year, ARIJ allocated a special award for the best COVID-19 investigation, which went to Muhammad Al-Hasani for “Quarantine Stations in Yemen: The Great Escape”. Al-Hasani’s investigation revealed the inhumane conditions, coupled with fears of catching the virus, that prompted Yemenis to flee their government-designated quarantine areas. It followed a number of individuals and their escapes, which were negotiated through bribes and collusion with authorities.

ARIJ, with a special mention from the jury, also honored an investigation by the Egyptian journalist Ramadan Hassan entitled “International Suspension”, which revealed the corruption of sports officials at the Egyptian Weightlifting Athletes Federation. The officials provided athletes with nutritional supplements containing steroids, destroying the careers of 50 Olympic athletes.

The multinational jury evaluated the 47 nominated investigations for this year’s awards on six basic criteria, including: novelty and originality of the idea, accuracy of expressions and sound language, availability of documents and evidence supporting the investigation, coherence of the storytelling of the investigation, adherence to professional ethics, and presentation.

Member of the jury, Ghassan Al-Shehabi, described this year’s investigations as “embodying seriousness and high professionalism”. He said that the nominees for the 2020 ARIJ Awards made a generous and abundant effort in bringing newness and depth to their work. This quality of work, he added, represents the region’s expansion of quality investigative journalism. Al-Shehabi explained that visual mediums influence the reach of published investigations, given that they play a prominent role in the investigations’ impact.

The winners of the ARIJ 2020 Annual Awards were announced on Sunday evening at the closing ceremony of its 13th Annual Forum, which ranks among the most important media events in the region.