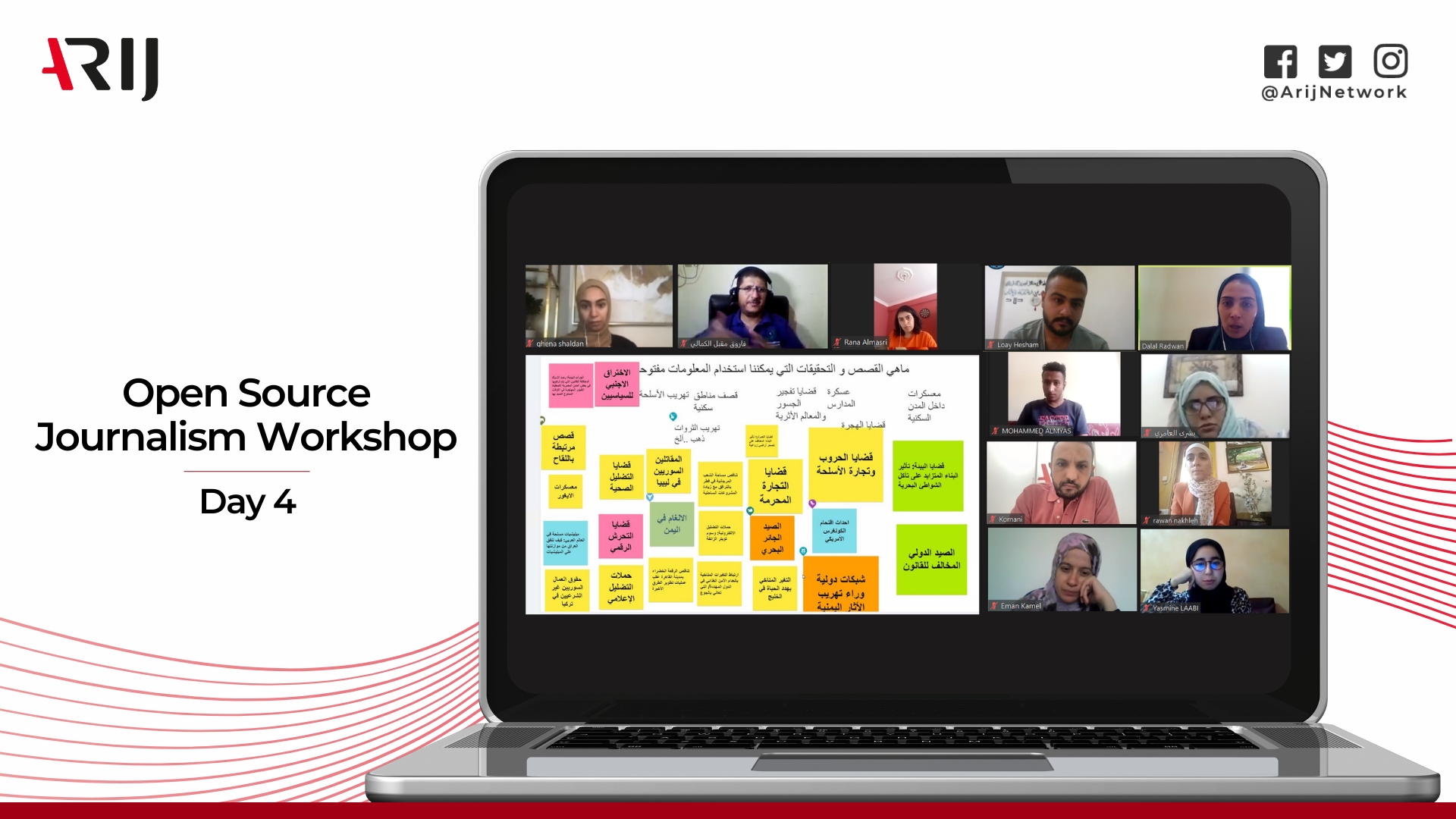 ARIJ Concludes Workshop on the “Secrets of Open-Source Journalism”

ARIJ concluded a five-day virtual workshop on the secrets and tools of open-source journalism, where journalists learned how to work on an investigative report driven by open sources.

On the first day, the session focused on the basics of building open source investigations, advanced sites search, and advanced search on social media sites. ‎On the second day, trainer Haneen Al-Naqari explained to journalists how to check geographical locations and time stamps, in addition to analyzing social networks.

The third day included a presentation on a number of case studies on open source investigations from a number of Arab countries. The journalists also trained on tools to help them save and organize their open source data, like the Check tool.

On the fourth day of the workshop, the trainees worked in groups of two, to verify and analyze open source information, and present their findings.

The workshop concluded its fifth and final day with a detailed explanation by trainer Jaloud on disinformation and the infodemic, with a focus on disinformation during the COVID-19 crisis. In four separate groups, the trainees also discussed ideas for open source investigations they plan to work on in the future. The investigations will focus on the topics of disinformation, human rights, the environment, in addition to tracking businesses and people.

The Moroccan fact-checker Yasmine Laabi confirms that during the workshop, she “actually learned about the secrets of open source journalism, with the help of the trainers, who shared with us the basics and the effective tools that help in finding and organizing information, and it guided us to several ideas and topics that can be investigated by open sources.”

Farouk Moqbel, a Yemeni journalist, considered that the workshop “opened our eyes to a new journalistic world and multiple skills,” expressing his enthusiasm, “to make the best use of these skills and knowledge that we have acquired to produce open source investigations and provide answers to many questions that remain ambiguous.”

Dalal Radwan, Palestinian journalist, pointed out that the skills and tools she learned “have enriched my knowledge and will help me work on my research and investigative materials during the coming period.”

It is noteworthy that more than 160 journalists and fact-checkers applied to participate in this workshop, and a special selection committee selected 16 of them (ten females and six males), from seven Arab countries.