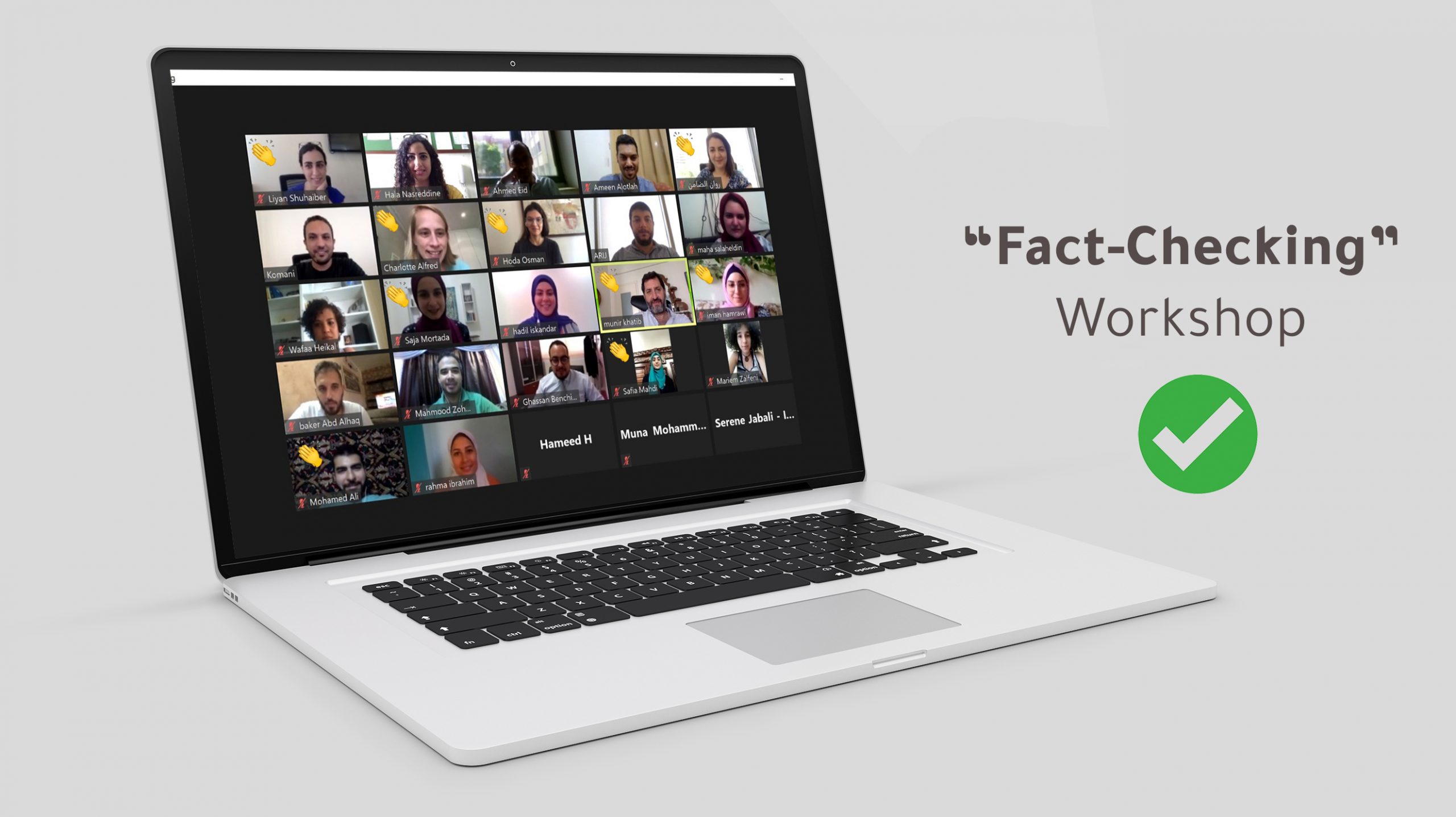 ARIJ’s Fact-Checking Training: A Breakthrough in the Arab World

Arab Reporters for Investigative Journalism (ARIJ) held training in Fact-Checking with journalist and fact-checker Charlotte Alfred between July 25 and 27, 2020.

Twenty journalists and fact-checkers from eight Arab countries participated in the training to advance their fact-checking skills and potentially become fact-checkers with ARIJ in the coming years. The trainees, with the support of the trainer and ARIJ’s team, developed the foundation of ARIJ’s work-in-progress Fact-Checking mini-manual and checklist that will be adopted and systematically utilised by the network’s editorial department.

Being the first of its kind in the Arab world to focus on fact-checking methodologies for long and detailed investigations, and not only tools, this training was highly regarded and valued by the participants who were introduced to, and trained on, the significant role played by the fact-checker in the process of producing investigations.

Unlike other trainings of this kind, ARIJ’s  was not confined to the tools necessary for verifying photos, videos, locations, and so on, but took fact-checking a step further to discuss the mindset and the concrete steps that the fact-checker needs to take to ensure the best quality of work while underscoring the best practices in fact-checking investigations. In fact, the fact-checking training was unique on all levels as it delved deep into the practice of fact-checking which is relatively new to Arab media institutions and personnel.

The training was held virtually, via the ARIJ Academy, with stimulus translation from English to Arabic, and vice versa.

“It is often the best people who make the worst mistakes – error is not the monopoly of the unfortunate few.” Quoting Professor James Reason, Alfred stressed on the meticulous and indispensable guidance that the fact-checker provides for investigative pieces.

Alfred identified a fact-checkers main responsibilities,, some of which are:

Additionally, Alfred specified what information can be fact-checked:

Alfred also differentiated between the fact-checker’s role and that of the editor to avoid any overlap in their roles and maintain a clear-cut division of tasks that avoid any potential miscommunication. Accordingly, the fact-checker is not entitled to:

While the fact-checker is generally perceived unfavourably by journalists, the trainees understood the heavy responsibility that the  fact-checker bears, and the necessity of his/her role in contributing to the enhancement of quality journalistic pieces,and avoiding any errors that could undermine the journalist’s credibility.

Throughout the three days of training, the participants conducted several practical exercises and group assignments which provided them with a hands-on experience of fact-checking. The participants, who are all experienced journalists and/or fact-checkers, were selected based on predefined standards, as ARIJ is seeking to expand its network of fact-checkers who can help the network produce the best versions of the investigative pieces it supports.

For the past decade, ARIJ has been determined to incorporate the fact-checking process into all of its investigative pieces, and is seeking to further develop this process.

Gaza’s Health Sector: Sanitation Workers Are Deprived of their Rights ...

ARIJ publishes a series of 17 investigations on the ...