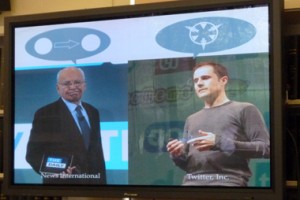 By Mark Glaser, April 10, 2011
BERKELEY, CALIF. — I am back at Day 2 at the 5th Annual Reva and David Logan Investigative Reporting Symposium, a gathering of the top investigative journalists and thinkers at University of California at Berkeley. Day 1 coverage is here, including an appearance by Skype by Julian Assange. Day 2 is shorter, but more focused on new models of journalism, including “collective work” and non-profit journalism. Collective Work Carrie Lozano, UC Berkeley: We are in a huge period of transition. The Guardian wants to do stories that will engage readers and make them take action. We wanted to get a technologist in here to talk about these things. Matt McAlister is an early adopter of social media, and will talk about what the Guardian is doing with open technology Matt McAlister, head of technology at Guardian, former Yahoo and Industry Standard: It’s about the network and the platform. I’m going to talk about business stuff, which is unusual for this event. I have trouble separating content from business and they all have to move toward a common purpose. Everyone understands that an open, collaborative approach is how we all should go. What we’ve failed to do is make the open, connected model of journalism work. In that space, there’s new thinking like Google Android, Twitter, Facebook and even Wikipedia. The Daily will feel even further behind. We’ve been doing live blogs for awhile, and they’ve been hugely successful for us. The sports guys really worked this out, telling stories minute-by-minute — we call them “Minute-By-Minutes” not live blogs. They do it in a Twitter-like way but Twitter has limits to it, and our website doesn’t have limits. The protests in the Middle East were perfect for this. We realized it had to be in Arabic too, so we took people away from their jobs to translate for us, and we got some translation services. Collaboration was necessary for us to do our job. If all of this was behind the pay wall, how could we have the same effect? Slide shows comparison of Rupert Murdoch and The Daily as being closed, with Ev Williams of Twitter being open: For the Times UK, they had very British experts on their site, and for the Times, that’s OK, because those are the people who are paying for their site. Q: Your correspondent mentioned that the advantage you had was being open and in Arabic, but how did you verify things? McAlister: I wish I knew, I didn’t have insight into the editorial process for that. Q: Were you translating Arabic into English too, so both audiences could understand? Not just text, but video too? McAlister: Yes, we translated both ways, and we did translate Twitter feeds, or we would post on our live-blog a Twitter feed in Arabic and translate it into English. They would do a screen capture of a tweet and put it in the live blog and the translator would translate that in a caption. Q: How do you manage your Twitter feeds? McAlister: We use Twitter much much more than Facebook, but our structure is very loose. Our reporters might use Twitter in very imaginative ways. We have guidelines for using Twitter but we don’t have a commitment to using it one way or the other. The downside is that people don’t always do the same thing, but it lets people invent new ways of using them. During the G-20 protests in London, a newsstand worker was pushed down to the ground by the police and had a heart attack. The police report seemed unsatisfactory, and Paul Lewis our reporter put out a call asking if anyone was there. Someone had taken a video of it, and found out we were looking for it via Twitter, and sent it to us in a secure way. It’s a fantastic story about how you can pull in sources with social media. Another case, there was a man who died on a plane and he asked for photos or images, and he got a plane list of passengers and started tweeting them, and found people who were on the plane. He started a network of people, and someone was killed on the plane, and the police covered it up. Read more.