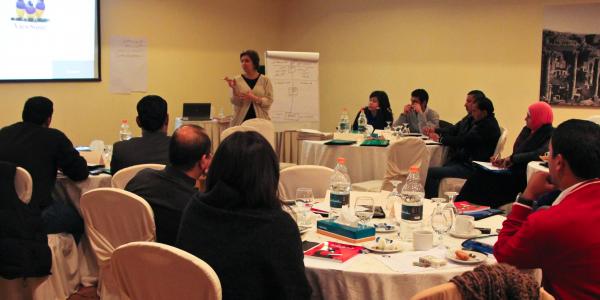 Amman, January 7, 2013 –Arab Reporters for Investigative Journalism (ARIJ) on Monday launched a five-day workshop for 13 television and print journalists on how to cover parliamentary and municipal elections in Jordan, using in-depth reporting techniques.

The workshop is part of a year-long program sponsored by the Jordan Office of the United Nations Educational, Scientific and Cultural Organization (UNSECO) to boost a culture of media excellence ahead of two national ballots: parliamentary elections on January 23 and municipal elections slated for June to enhance the country’s political reform.

Under the program, journalists will be trained on basics of Investigative Journalism in line with the ARIJ Manual: “Story-based Inquiry”, Computer Assisted Reporting tools, legal safeguards and multi-media skills.

In turn, journalists will work on producing investigative reports before and after the elections to ensure greater transparency and accountability.

The UNESCO project, entitled: “Enhancing Professional and Accurate Media Reporting on the Electoral Process” aims at promoting free, objective and impartial reporting on elections to boost public confidence in the role of The Fourth Estate.