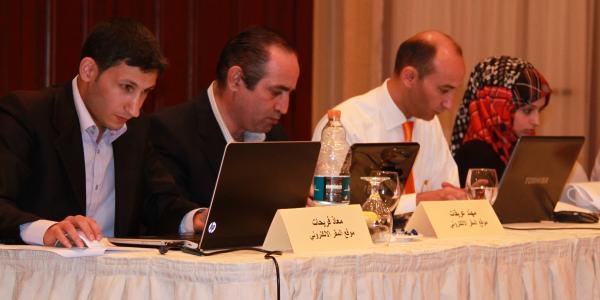 AMMONNEWS – British Ambassador Peter Millett today opened the first workshop – which is part of a one year project with The Thomson Reuters Foundation that aims to significantly improve investigative reporting in Jordan, both in Amman and in regions outside the capital including Zarqa, Irbid and Karak.

About 45 journalists will attend the training workshops being held in Amman focusing on the media’s role in investigating corruption cases. The workshops will be taught by senior Thomson Reuters Foundation consultants.

The journalists will also be trained in ethical and objective approaches to investigative reporting on corruption and governance issues, and will have opportunities for networking and mentoring.

The British Ambassador Peter Millett said: “A responsible and professional media is the backbone of any democracy, and journalists have a key role to play in tackling corruption. We are happy to support this project through our Arab Partnership Programme and to share the UK’s experience and expertise in this field. Freedom of speech is one of our key principles.”

Jo Weir, who leads the Foundation’s media and journalism training programmes, said: “By supporting professional and responsible investigative reporting at the local level, this project will bolster anti-corruption efforts in Jordan and help the Jordanian media convey essential news and trusted information to the Jordanian public.”

Training will also be provided to staff from Jordanian civil society organisations, to improve communication between these organisations and the media.

In-country support for this project will be provided by the Arab Reporters for Investigative Journalism (ARIJ), which promotes and supports investigative journalism in the Arab world.

Stories produced by participating journalists will be curated for publication on ARIJ’s website and promoted to external media outlets, to boost awareness of these issues within the region, and worldwide.

The Thomson Reuters Foundation will also translate selected stories into English and publish them on its website, http://www.trust.org.

The Arab Partnership, a joint Foreign & Commonwealth Office and the Department for International Development plan, provides UK Government support for political and economic reform in the Middle East and North Africa, helping the people of the region build more open and accountable societies. This includes diplomatic support, working with international institutions like the G8 and EU, and £110 million over 4 years to help finance locally-led reform projects.

The Thomson Reuters Foundation leverages the skills, values and expertise of Thomson Reuters to run programmes that trigger change and empower people across the world: free legal assistance, media development, and in-depth coverage of the world’s under-reported stories. The Foundation stands for human rights, women’s empowerment, anti-corruption and for the rule of law.

Arab Reporters for Investigative Journalism (ARIJ) is one of the leading media organisations in the Middle East with dedicated support and a network to promote investigative journalism in the Arab world. Established in 2005, ARIJ is a non-for-profit organisation which supports independent quality professional journalism by conducting in-depth journalism programmes and by offering journalism training for media outlets in Jordan, Syria, Lebanon, Egypt, Iraq, Bahrain, Palestine, Yemen and Tunisia.