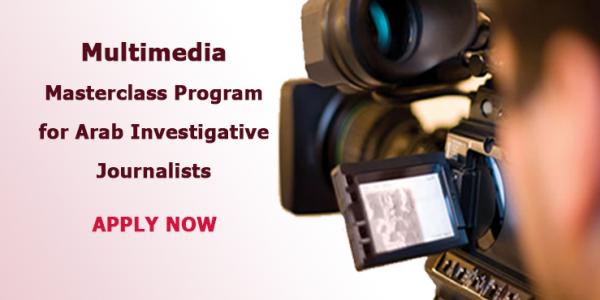 Arab Reporters for Investigative Journalism (ARIJ) invites Arab journalists with experience in investigative journalism to apply for one of 14 scholarships to receive advanced training in video and multimedia production by international awardwinning trainers and learn to coach other journalists.

Successful applicants will attend three specialized 10-day workshops in Amman in June, September and November 2014 and will be mentored to complete a substantial investigative project. This may be a documentary film of 25 to 50 minutes in length, a multimedia package including infographics or a series of short video reports.

To apply, journalists should submit:

Investigation proposals will be treated in complete confidence by ARIJ. Proposals should include as much detail as possible, including any evidence already collected to demonstrate the validity of the story.

ARIJ will select the successful candidates based on the strength of their story proposals and the investigative journalism skills shown in their past work. It will give priority to journalists in the nine countries where it operates (Jordan, Syria, Bahrain, Yemen, Iraq, Palestine, Egypt, Lebanon and Tunisia) who have:

2) Have produced at least one multimedia investigation for radio, print or television with support from ARIJ between 2007 and 2013.

ARIJ’s Executive Director, Rana Sabbagh, said: “Arabs are demanding transparency and accountability in society, business and government. ARIJ’s goal is to nurture a new generation of Arab investigative journalists with multimedia skills who can uncover the truths that audiences want told.”