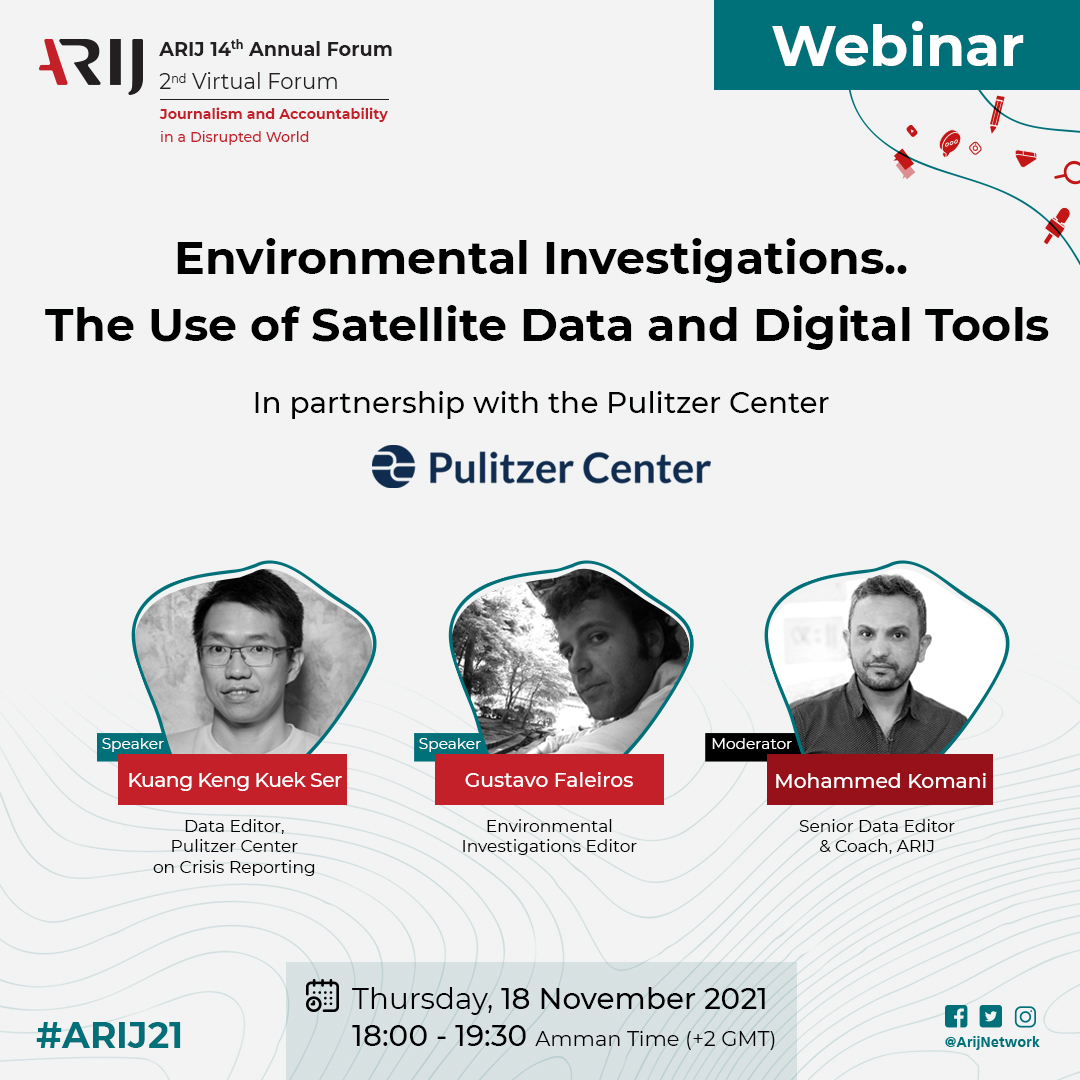 Environmental Investigations.. The Use of Satellite Data and Digital Tools

ARIJ in partnership with the Pulitzer Center are offering a webinar on “Environmental Investigations.. The Use of Satellite Data and Digital Tools” the webinar will take place virtually on Thursday – Nov 18 at 18:00- 19:30 Amman time In this webinar, attendees will learn from two leading geo journalists to harness the power of remote sensing techniques and tools for environmental investigations.

Attendees will witness examples of how journalists are using advancements in digital technology and satellite imagery for data/map-based investigations to report deforestation and other illegal activities. They will also explore how these tools and techniques might complement future investigations once public health concerns have ceased.

Gustavo Faleiros is the environmental investigations editor for the Pulitzer Center, where he coordinates the Rainforest Investigations Network (RIN). Based in São Paulo, Brazil, he is an environmental journalist and media trainer specializing in data-driven journalism. In 2012, he launched InfoAmazonia, a digital platform that uses satellite imagery and other publicly available data to report on the nine Amazon rainforest countries.

Prior to that, he was editor of the Brazilian environmental news site O Eco. Faleiros began his career as a reporter for Valor Econômico, Brazil’s leading financial newspaper, where he covered infrastructure and sanitation. He was also twice selected as a Knight International Journalism Fellow at the International Center for Journalists (ICFJ) for the work he did to promote data literacy and geojournalism. Between 2014 and 2017, he worked in partnership with the Earth Journalism Network (EJN), where he led the Council of the Partners, the climate mentorship program, in addition to activities in Africa and Latin America. Faleiros earned a master’s degree in Environment, Politics and Globalization from King’s College London and a bachelor’s degree in journalism from the Catholic University of São Paulo (PUC-SP). He has also contributed to several publications such as Nature, Scientific American, The Guardian-UK, Revista Piauí and Folha de São Paulo.

Kuek Ser Kuang Keng is the data editor of the Rainforest Investigations Network established by the Pulitzer Center. He is also a data journalism trainer and media consultant based in Kuala Lumpur, Malaysia. Partnering with regional journalism organizations including Google News Initiatives, WAN-IFRA and Internews, he has been conducting regular digital journalism workshops since 2018, reaching over 1,000 journalists in Asia. He also provides consulting and mentoring to media organizations in data, visual and interactive journalism. Keng has more than 15 years of experience in digital journalism. He started as a reporter at Malaysiakini, the leading independent online media in Malaysia, and worked on high-profile corruption cases and electoral frauds during the eight-year stint. He has also worked in several US newsrooms including NBC, Foreign Policy and PRI.org mostly on data-driven reporting. Keng holds a MA in journalism from New York University. He is a Fulbright scholarship recipient, a Google Journalism Fellow and a Tow-Knight Fellow.

To apply for the ARIJ21 Annual Forum, please click here