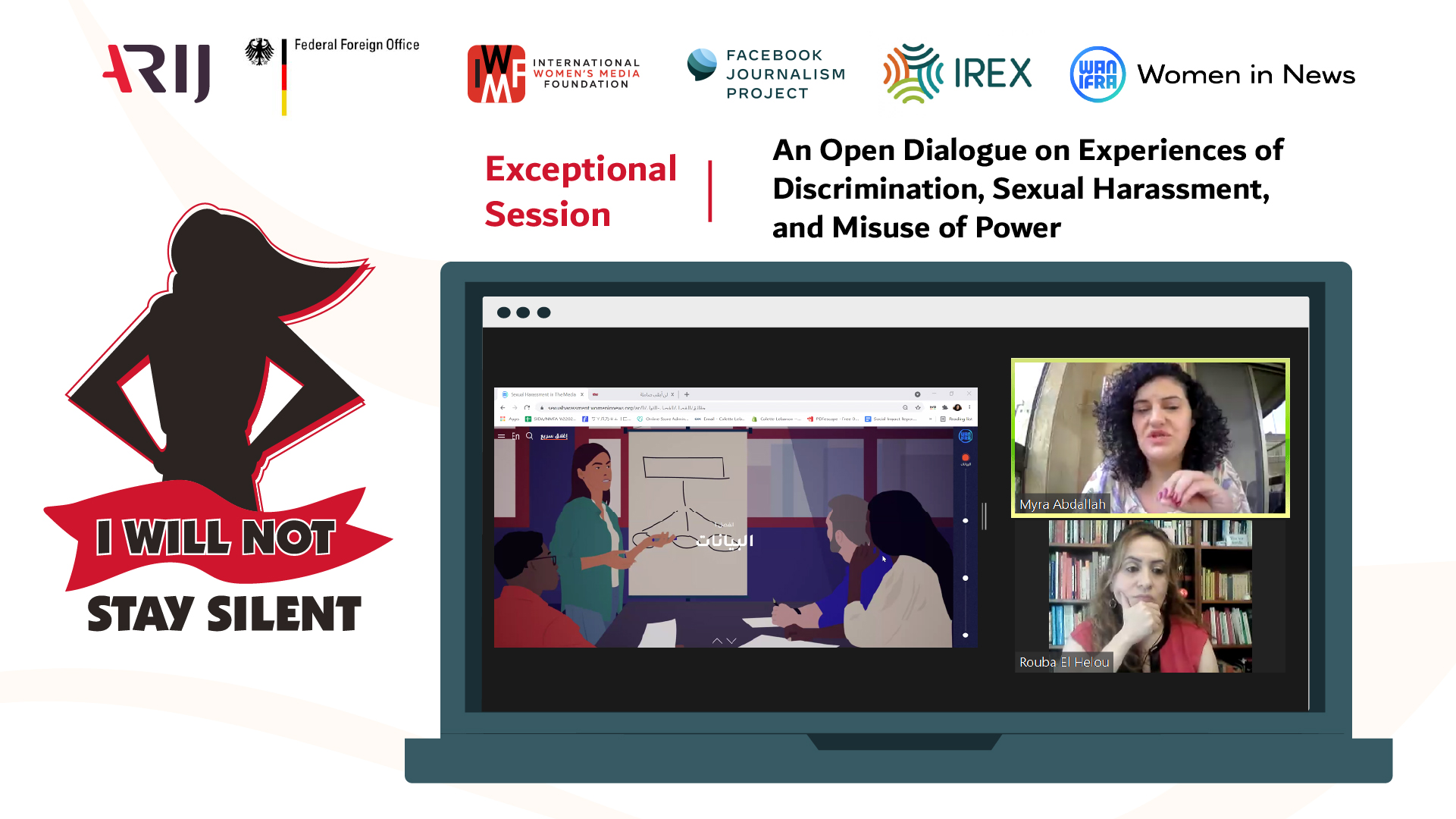 I Will Not Stay Silent: An Open Session on Experiences of Discrimination, Sexual Harassment, and Misuse of Power

At the request of participants in the “I Will Not Stay Silent” webinar series, which ran for 12 weeks from March to May 2021, an exceptional session titled “An Open Dialogue on Experiences of Discrimination, Sexual Harassment, and Misuse of Power” was held on 28 June. The session aimed to amplify the voices of victims and survivors and provide an open space for the audience to share their personal experiences of discrimination, sexual harassment and various forms of misuse of power.

“I Will Not Stay Silent” is a year-long project launched by ARIJ (Arab Reporters for Investigative Journalism) in partnership with the Facebook Journalism Project, Women in News / WAN-IFRA, the International Women’s Media Foundation (IWMF), and SAFE, IREX, and supported by Germany’s Federal Foreign Office,

At the outset of the session, Abdallah explained that the battle is not between men and women. Rather, a rights respecting community rejecting a repressive system that was created by men that is “resulting in the deterioration of human rights, and the rights of minorities and marginalized groups in favor of the patriarchal man who is affiliated with this age-old system that continues till now.”

Regarding press and women in media, Abdallah emphasized that the female journalist is not seen as a journalist. Rather, a woman who is easy prey for assault within the framework of the social system we live in.

Abdallah added that it takes years to change a system in which one group violates the rights of another to maintain its own privileges.

The discussion also touched upon the problem of survivor blaming, which is deeply entrenched in our Arab region, according to Abdallah, due to the customs and traditions that protect and support the more powerful party. Therefore, in many cases, it is very difficult for women to speak up.

In the same context, the gender trainer highlighted that blaming survivors is scary, and its consequences extend to negatively impacting their psychological health. This demands parallel work to encourage women to speak up on the one hand, and working to educate others who blame them, on the other.

A number of participants shared deeply personal and vivid experiences of discrimination, sexual harassment and misuse of power they witnessed or were affected by. The absence of laws that protect women from violence and sexual harassment contribute to the prevalence and acceptance of sexual harassment, Abdallah pointed out.

The second component of the year-long project, a three-month virtual diploma program titled “Together Against Discrimination,” was launched in June 2021. The program focuses on equipping  more than 20 Arab journalists, researchers, and civil society professionals with theoretical and practical hands-on knowledge to design and implement effective internal complaints mechanisms against various forms of misuse of authority in media institutions and general media working environments, such as fraud, corruption, harassment and hate speech, to permit stakeholders to best receive, respond, investigate and report any form of alleged complaints.