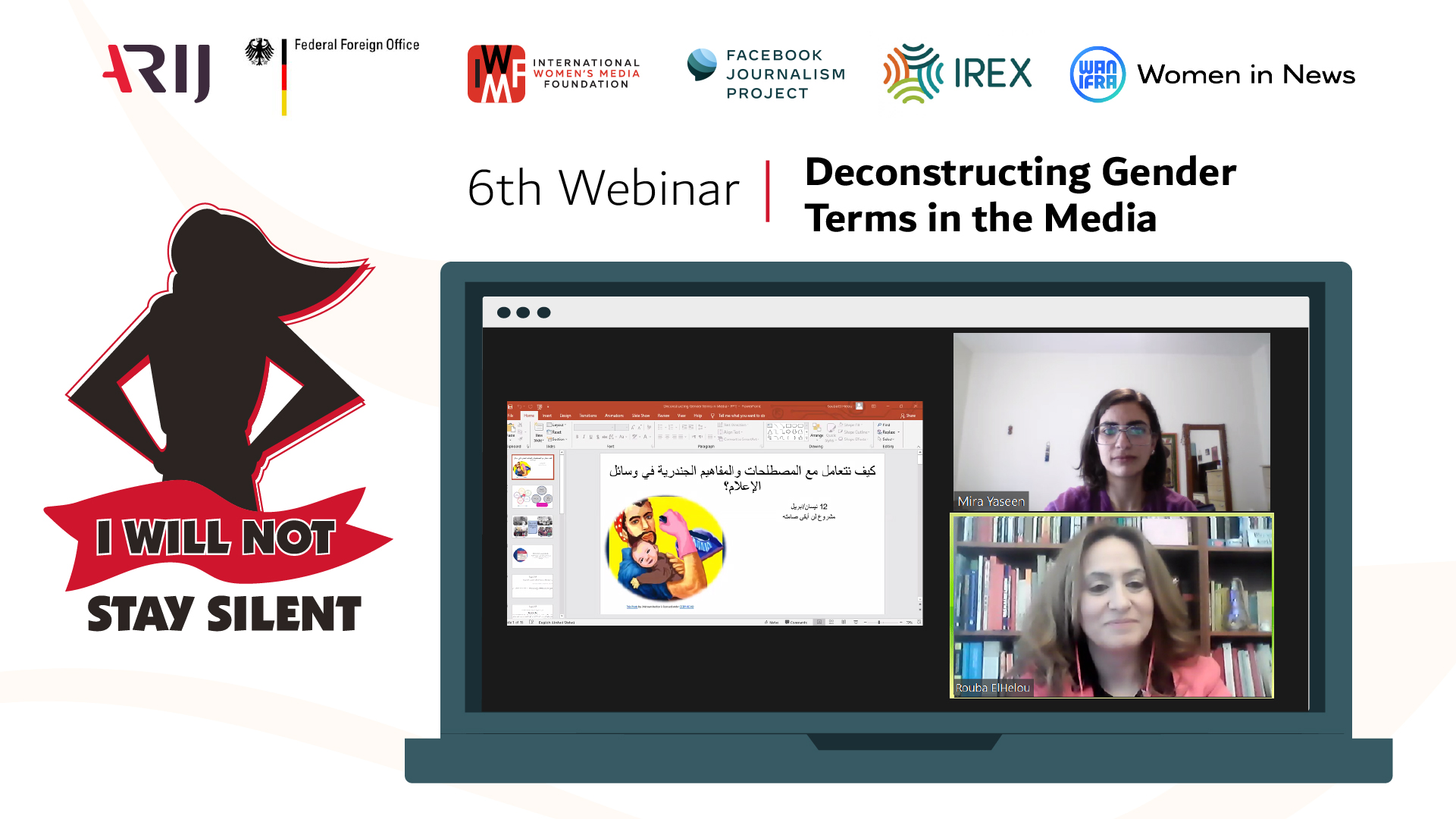 I Will Not Stay Silent: Deconstructing Gender Terms in the Media

The sixth webinar under the I Will Not Stay Silent project, with the participation of 150 Arab journalists and activists, discussed how to deal with gender terminologies in media outlets, in line with  the project’s objective; to create a safe, pluralistic media environment that is free of discrimination based on sex, gender, ethnicity, race, religion, ideology, or anything else.

ARIJ (Arab Reporters for Investigative Journalism) launched the project in partnership with the Facebook Journalism Project, Women in News / WAN-IFRA, the International Women’s Media Foundation (IWMF), and SAFE, IREX. The project is supported by the German Federal Foreign Office.

The sixth webinar, conducted on April 12, 2021, hosted Dr. Rouba El Helou,  political communication and gender lecturer at the Faculty of Law and Political Science at Notre Dame University-Louaize, Lebanon. The discussion was moderated by I Will Not Stay Silent project manager Mira Yaseen.

Throughout the ninety-minute session, participants interacted with the content with comments and questions. Through a presentation, El Helou introduced the subject and presented many questions on the use of gender terminology in the media outlets, serving as an entry point for the discussion. Emphasis was placed on ways to use terms related to gender in an appropriate linguistic context, and the importance of proper contextual translation that captures the spirit of the language without losing the meaning.

El Helou pointed out that the lack of clarity of specific terms and concepts in journalistic works is a form of inaccuracy. She continued: “Journalists care about reporting news and events accurately and following professional standards. The proper use of language contributes to accuracy as well. It is a form of inaccuracy when information is presented using incorrect language and unclear terms.”

El Helou highlighted that “Language could be a form of power. One might argue that Arabic favors men and imposes figures of speech and criteria from the lens of the man.” In contrast, she added, “language is a means of intellectual creativity, and translation helps us express what we feel in one language and transfer it to another, that is If we understand the cultural and social contexts, even if this expression does not exist in the original language.”

For media outlets to be sensitive to gender concepts, Dr. El Helou emphasized the necessity of differentiating between gender identity and biological identity; the former is defined through complex social roles, often as a result of social norms, customs and traditions, while a biological identity is defined by one’s sex.

In the next webinar, Mona Salman, presenter and TV host  will address “Sexual Harassment in Newsrooms,” and ways to confront it. Register for the session through the link. Webinars are conducted weekly on Mondays from 2 -3:30 PM Amman time (GMT +3) during Ramadan. The project uses the hashtag, #IWillNotStaySilent to spark a discussion in the public sphere and on social media on harassment, discrimination, and abuse of power.