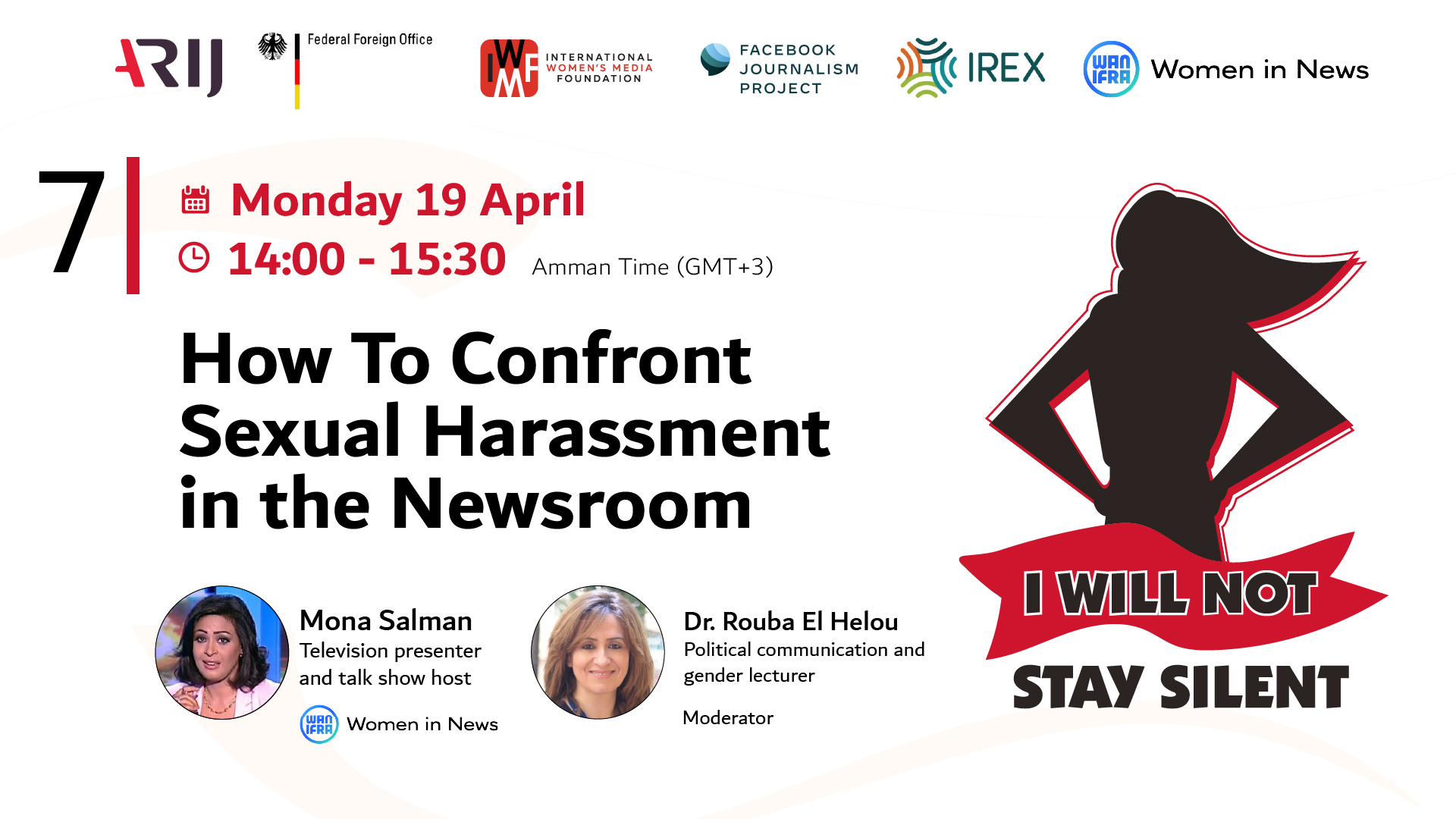 I Will Not Stay Silent: How To Confront Sexual Harassment in the Newsroom

The seventh webinar under the I Will Not Stay Silent project discussed sexual harassment in media organizations and different mechanisms to confront harassment within newsrooms and in the media community at large, as part of the project’s aim to create a safe, pluralistic media environment that is free of discrimination based on sex, gender, color, race, religion, or ideology.

I Will Not Stay Silent is a year-long project that was launched by ARIJ (Arab Reporters for Investigative Journalism) in partnership with the Facebook Journalism Project, Women in News / WAN-IFRA, the International Women’s Media Foundation (IWMF), and SAFE, IREX. The project is supported by the German Federal Foreign Office.

The webinar was conducted on 19 April 2021, and moderated by Dr. Rouba El Helou, political communication and gender lecturer at the Faculty of Law and Political Science at Notre Dame University-Louaize, Lebanon. It hosted Egyptian talk show host and TV presenter Mona Salman, who currently teaches journalism at the American University in Cairo, and trains at many institutions, such as Cairo University Radio and Television Institute, El Shorouk Media Academy, and the Adham Center at the American University, and cooperates with international bodies like WAN-IFRA.

Salman started the session with a poll on sexual harassment in the workplace that explored participants’ perceptions of various harassment acts, opening a discussion on obstacles to reporting sexual harassment in media organziations. On this issue, participants raised valuable points about the victim/survivor’s fear of  stigmatization, losing their job, and targeting and blaming.

Salman pointed out the difficulty of proving  the occurrence of sexual harassment, as it mostly occurs within spaces where it is difficult to gather evidence or establish proof. She added that many institutions avoid dealing with sexual harassment allegations out of fear for the “reputation of the organization” or for reasons related to the position and authority of the aggressor within the organization.

In response to institutions that deny the existence of harassment within them, the former presenter of Asharq Al Awsat Radio said that they can be confronted with figures and statistics according to which 48% of female journalists have been subjected to some form of sexual harassment while performing their work, 83% of which did not report the incident. She also touched on the broad nature of the media working environment,  as it is not limited to the newsroom and extends to field work, studios, events, meetings with sources, and training courses as well.

Salman stressed the need for a declared policy within every organization to confront sexual harassment that clearly outlines the concepts of harassment and its consequences, noting that such policies aim to protect all employees within the organization, not only women.

She also highlighted that indicators of gender balance in media outlets confirm that sexual harassment has nothing to do with sexual desire, but rather, it is a violent crime often related to the imbalance of power in favor of men,  in the absence of women in leadership positions, that result in excluding women from the public sphere.

In the next webinar, “How To Report on Sexual Harassment in Media Organizations & Why it Matters,” Myra Abdallah, a journalist and trainer specialized in gender and combating sexual harassment, will discuss the importance of sexual harassment policies in media organizations, the different types of reporting mechanisms and the importance of standalone policies that create safe work environments, particularly in the media industry. The webinar will be conducted next Monday, 26 April 2021, and registration is available through the link.