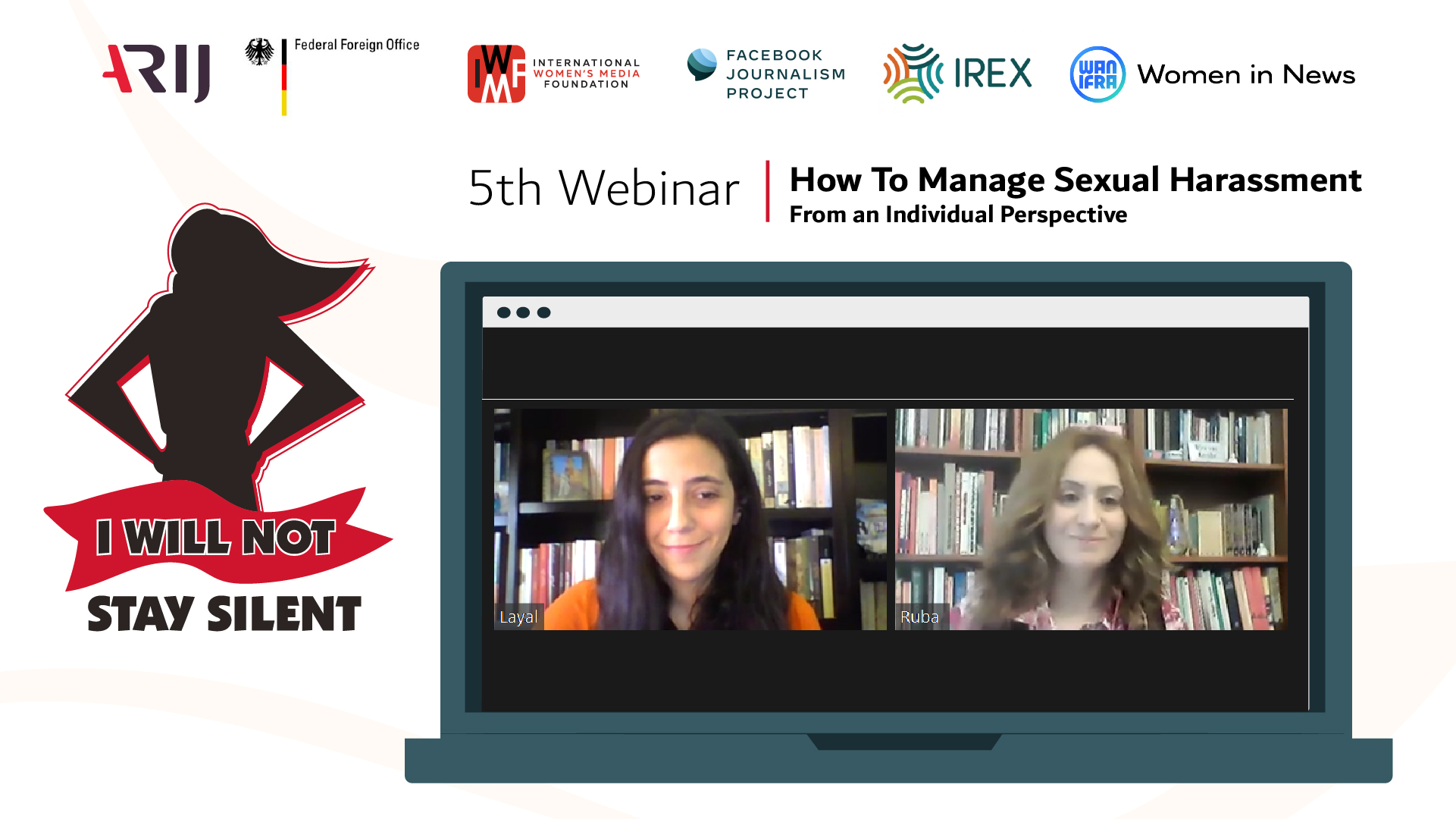 I Will Not Stay Silent: How To Deal With Sexual Harassment From an Individual Perspective

The fifth webinar under the I Will Not Stay Silent project, “How to Combat Sexual Harassment From an Individual Perspective,” discussed effective ways to confront harassment, individually, institutionally, and within newsrooms. ARIJ (Arab Reporters for Investigative Journalism) launched the project in partnership with the Facebook Journalism Project, Women in News / WAN-IFRA, the International Women’s Media Foundation (IWMF), and SAFE, IREX, supported by the German Federal Foreign Office. The year-long project aims to create a safe, inclusive media environment that is free of discrimination based on sex, gender, ethnicity, race, religion, ideology, or anything else.

The webinar was moderated by Dr. Rouba El Helou, political communication and gender lecturer, and presented by Layal Haddad, Lebanese journalist and head of the media section at the New Arab newspaper and website. Haddad opined that harassment often stems from authoritarianism men exert over women.

Haddad differentiated between personal freedoms and sexual acts, explaining that watching pornographic movies, making sexual jokes, and sticking sexual posters in the workplace are all acts of harassment that must be stopped, because they create a hostile work environment. Haddad suggested that harassment may stem from men’s jealousy of working women and that men’s feeling of superiority over women may deprive women of their equal rights in the workplace.

Replying to a question by one of the participants on how to protect women from a male superior at work who uses his power to sexually harass women, Haddad said that implementing laws and regulations is a first step in codifying the criminalization of harassment.

Haddad highlighted that education at home, at school, and at places of worship perpetuates inequality between men and women and creates an environment that accepts harassment, considers it a right for men, and blames harassment victims.

Haddad estimated the age group, 20 to 45, as most at risk of harassment, pointing out that harassment is more prevalent in government institutions, while indicating that accurate data on sexual harassment in the Arab world are not available.

She recommended developing internal policies with zero tolerance for sexual harassment, educating managers and employees, securing the safety of workers inside and outside of the office, and promoting policies that establish gender equality at institutions.

Combating harassment, according to Haddad, starts from the victim’s evaluation of the act as an act of harassment or not. Then, to make it clear to the harasser that the act is unacceptable to deter them and force them to retreat, leading to the submission of a formal complaint at the institution or filing a report at the police station.

Haddad ended the session with a poll about the rights of the harasser, including the right to privacy, having access to the details of the complaint details, the right to respond to the accusations, as well as the right to appoint a lawyer and appeal if a decision is issued against him/her. She emphasized the importance of educating the harasser about what harassment entails, before taking action against him/her.

In the next session, “Deconstructing Gender Terms in the Media,” slated for 12 April from 2-3:30 PM Amman time (GMT +3), Dr. El Helou will discuss how to use gender terminologies in their proper contexts and how terms may be translated from one language to another without losing their meaning. The session will offer a reflection of the construction of language and our shared experiences with gender terminologies in the media. Register for the session through the link.