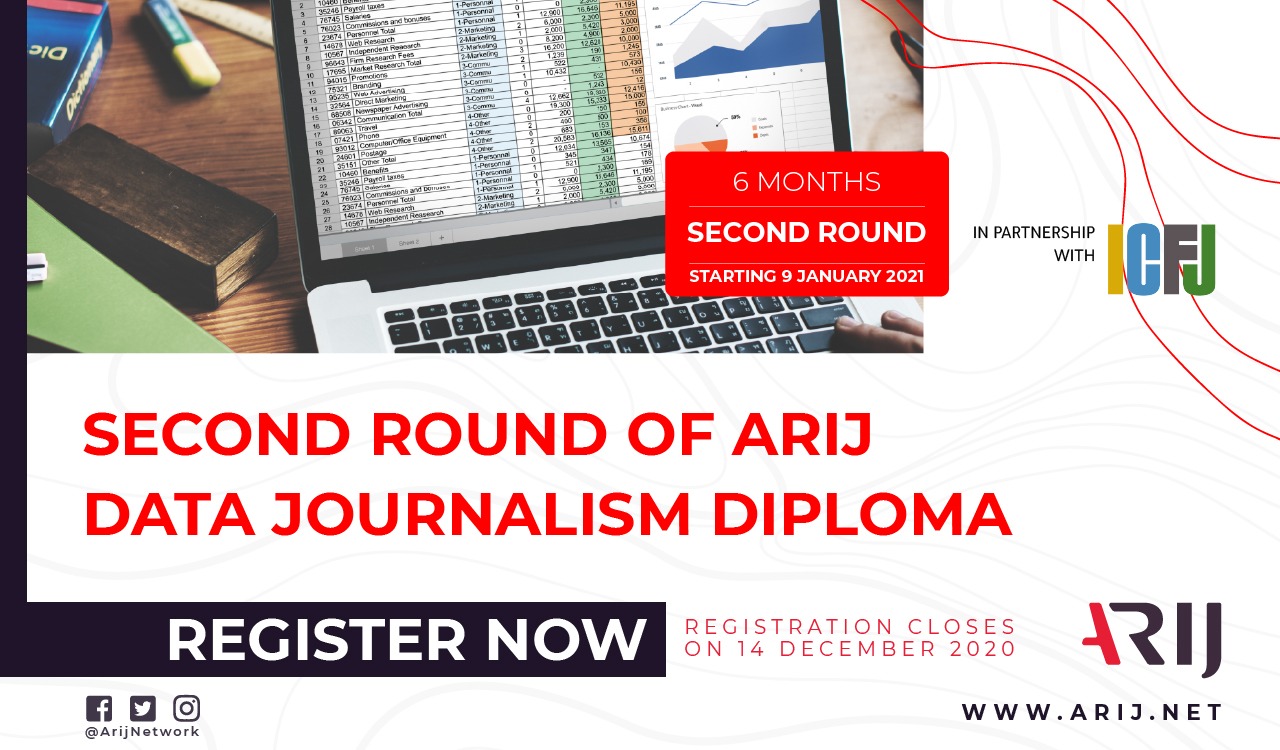 For the second time in the Arab world; free advanced training scholarship on data journalism from A-Z

AMMAN — Arab Reporters for Investigative Journalism (ARIJ), in cooperation with the International Center for Journalists (ICFJ), is announcing the launch of the second edition of the six-month Data Journalism Diploma; a free online training program aimed at empowering Arab journalists in data journalism.

The diploma combines tailored trainings, coaching, mentoring, producing and networking opportunities, offering selected journalists a unique and exclusive opportunity to learn, exchange ideas and connect with their counterparts around the Arab world to become advocates of data journalism in their own countries.

This grant comes in light of a memorandum of understanding between ICFJ and ARIJ, through the distinguished Knight Fellowship, and under the direct supervision of Egyptian coach and data journalist Amr Elerqi.

The scholarship will be awarded to 15 journalists in the early and/or intermediate stages of their journalistic work, and it is open to all Arab countries and Arab journalists. Trainees will receive editorial, logistical, technical and financial support to help them produce their own data-driven investigation, and are obligated to attend two virtual live training sessions every week for six months, on each Saturday and Wednesday from 19:00–21:00 Amman Time, in addition to completing weekly assignments. At the end of the programme, trainees will be coached and mentored to produce their own data-driven investigation, and will participate in ARIJ’s 14th Annual Forum (ARIJ21).

The diploma’s first edition was launched in the summer of 2020, and resulted in training 20 journalists over a period of six months to produce nine data-driven investigations.

High commitment is required. Each trainee will need to attend two live virtual trainings from 19:00–21:00 (Amman Time) every Saturday and Wednesday for six months, in addition to weekly assignments and being coached/mentored in their own investigation. If a trainee misses 20% of the sessions, he/she will not have the opportunity to continue, or get the certificate or be coached with the investigation. Absence for any session without prior permission is not allowed.

The main trainer is ICFJ Knight Fellow Amr Eleraqi. An Egyptian journalist and trainer, Eleraqi was the driving force behind the launch of the Arab Data Journalists’ Network. In 2012, he founded InfoTimes, a website specializing in data journalism. Eleraqi serves as executive editor of InfoTimes, which has won multiple awards including the 2018 GEN award for best small newsroom. He is the author of two books on data journalisms, including “Data Journalism Fundamentals,” which was published in 2016 and is the first book on the topic in Arabic. Eleraqi is also a lecturer in journalism at the American University in Cairo.

The course content will use Internews’ Jordan Data Journalism Training Manual by Eva Constantaras with contributions from Reem Al Masri and Amr Eleraqi which was developed in 2019-2020 as part of the Internews’ Data for Change program in Jordan and is now hosted as an open source resource by ARIJ through this link. Additional content was adapted from other Arab language data journalism training manuals developed by Ms. Constantaras for the World Bank’s Sudan Evidence Base and Data Literacy Capacity Development Program and Internews’ Iraq Open Iraq Initiative.

The application has been closed on December 17 at 12:00 AM