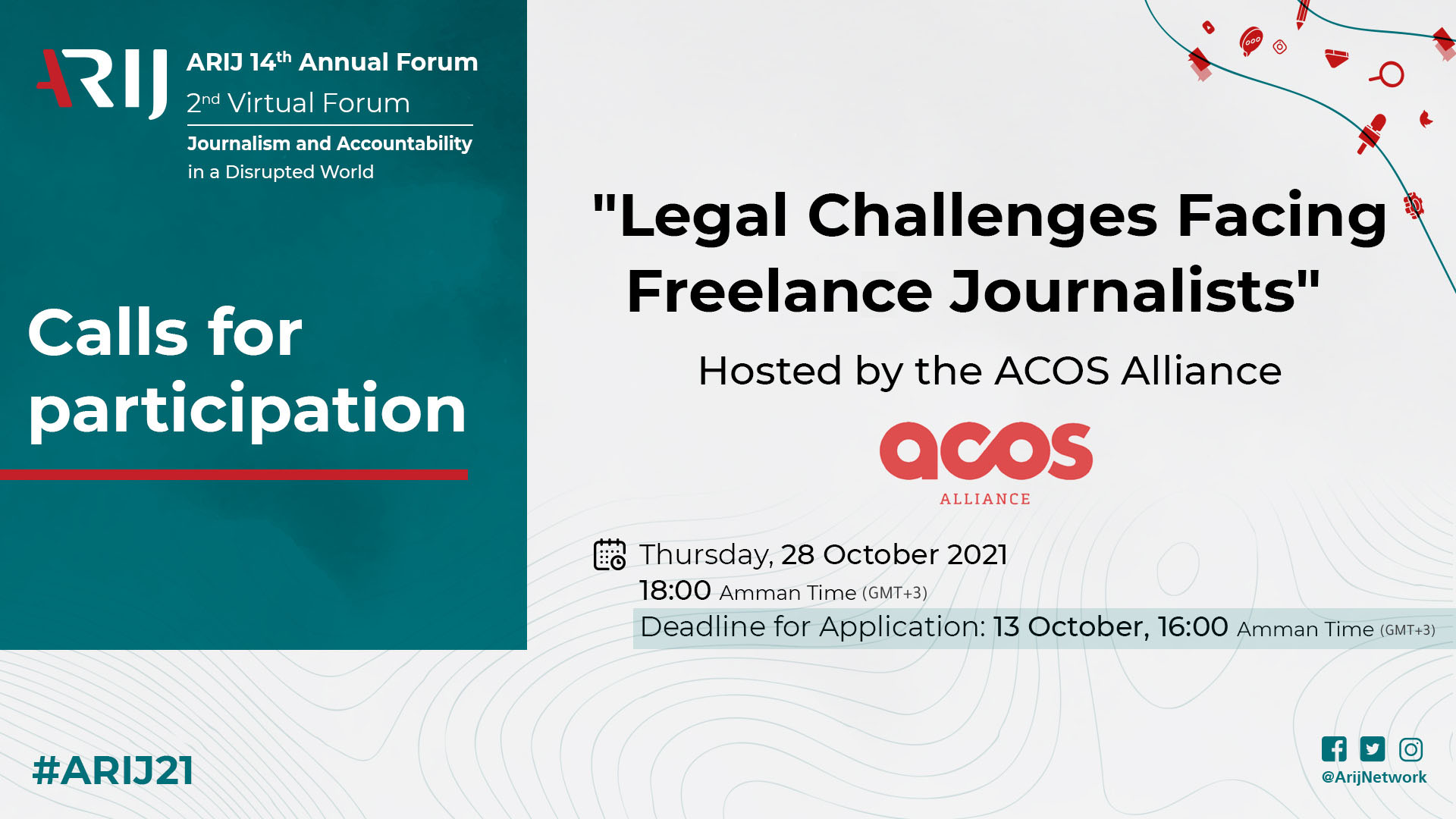 This 2 hour workshop will engage participants in active discussion and consideration of legal issues facing freelance and other individual journalists (reporters, photographers, videographers, editors) in challenging environments.  It specifically will present and address questions and comments from participants about the model freelance contract that ACOS Alliance, Frontline Freelance Register (FFR) and The Cyrus R. Vance Center for INternational Justice have developed and made available in Arabic and English, with the support from Samir Kassir Foundation.  It also will explore the experiences and views of participants regarding access to official information, protection of sources, official restrictions on reporting and publishing, risks of legal actions for defamation and invasion of privacy, and similar legal issues. This will be an interactive session featuring recorded remarks and live facilitation.

To apply for the ARIJ21 Annual Forum, please click here

The Deadline to receiving applications for this workshop is: Wed Oct 13th at 16:00 Amman time (+3 GMT)

Alexander Papachristou joined the Vance Center as Executive Director in January 2012. He directs the organization’s overall operations and focuses on its programmatic and institutional initiatives, as well as fundraising.;Mr. Papachristou previously was president of the Near East Foundation, a participatory, community-based economic and social development organization working in Arab and African countries. For the preceding 18 years, Mr. Papachristou engaged in cross-border corporate finance in advisory and proprietary roles: he served as managing director and general counsel at NCH Capital, Inc, which invests in the former Soviet Union and Eastern Europe, he lived in Russia from 1989 to 1993, where he opened and ran the Moscow office of White & Case. Papachristou also worked in the law firm of Clifford & Warnke in Washington, DC and was policy assistant to New York Governor Mario Cuomo. He served as law clerk to US District Judge Myron H. Thompson in the Middle District of Alabama. Papachristou is a member of the board of the International Consortium of Investigative Journalists, as well as the advisory council of Bard College’s Center for Civic Engagement. In late 2011, The New Press published Blind Goddess: A Race and Justice Reader, which Mr. Papachristou edited.;Mr. Papachristou received an LLM and JD from Harvard Law School and an AB from Princeton University, as well as Arabic language training at the American University in Cairo.

Elisabet Cantenys is the Executive Director of the ACOS Alliance, an unprecedented coalition of news organizations, freelance journalist associations and press freedom NGOs working together to champion safe and responsible journalistic practices. She has led the Alliance since 2016 and manages a rich programme of activities focused on creating a culture of safety across newsrooms and among freelance and local journalists worldwide. Cantenys is former Head of Programmes at the Rory Peck Trust, in London. She joined the Trust in 2004 as a researcher and rose to the role of Head of Programmes in 2010, overseeing, managing and implementing more than a dozen journalist safety projects worldwide. Cantenys has worked as a freelance documentary producer, radio journalist and writer in New York, London and Barcelona. She is a regular participant and speaker at press freedom and journalism safety conferences and events. She has a Master’s degree in global politics from the University of London and is a guest lecturer at the Blanquerna School of Communication and International Relations, in Barcelona.