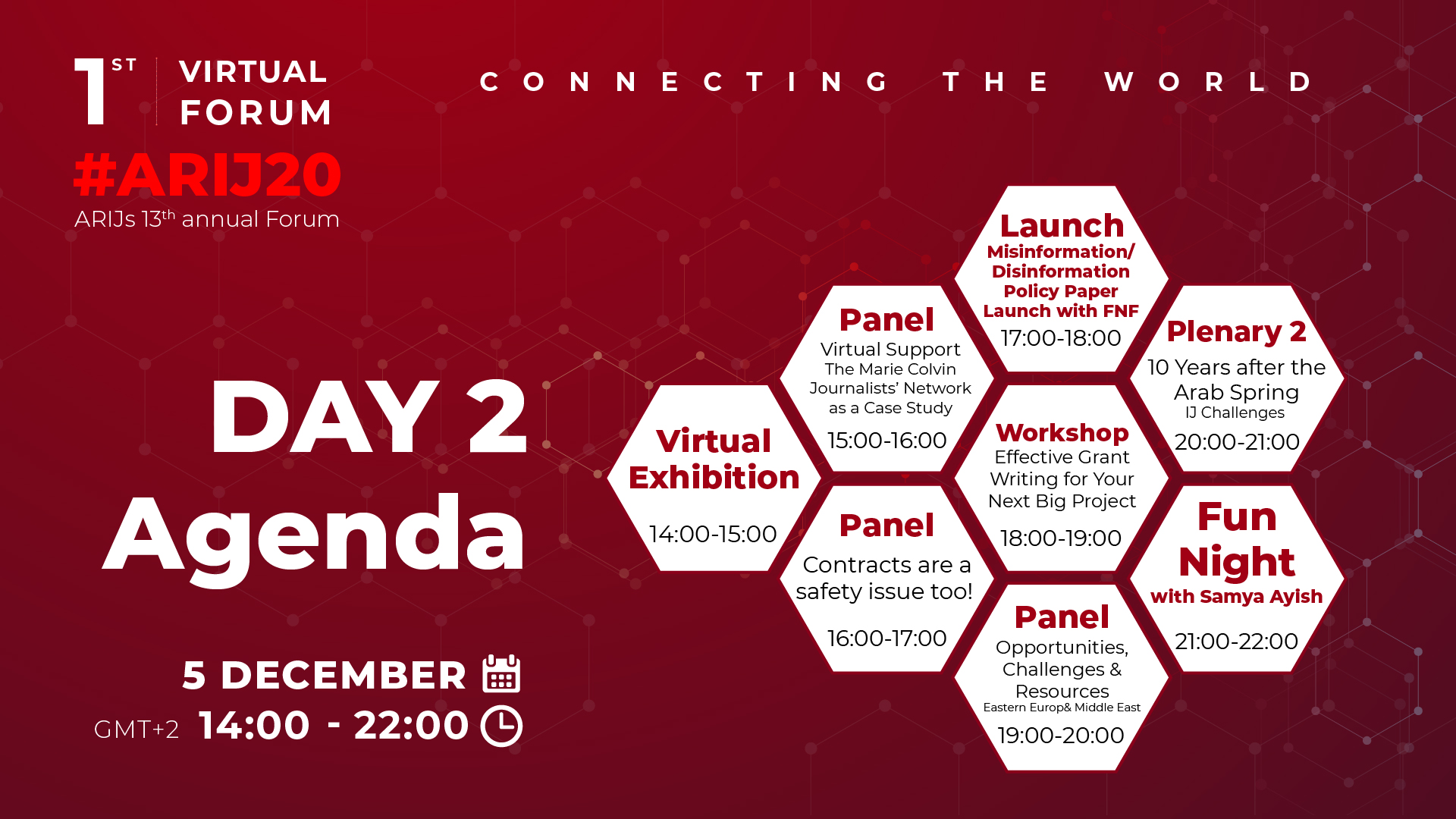 In the first session, Dima Hamdan, Editor of The Marie Colvin Journalists’ Network, highlighted the features of a digital world and the network’s support to female journalists. Hamdan was joined by Senior Broadcast Journalist and Presenter  at AlAraby TV Najlaa Aboumerhi and Mahacine Mokdad, a Moroccan Freelance TV Reporter/ Producer who was mentored by the network.

Later in the day, ARIJ released its policy paper on combating disinformation in the Arab world in partnership with the Friedrich Naumann Foundation for Freedom (FNF), in both Arabic and English. The paper discussed the fear associated with the pandemic and societal mistrust in governments’ handling of the crisis. Dr. Noha Atef, who led the paper’s research, pointed to the ethical violations of media professionals during COVID-19. Ferdi Ozsoy, director of the International Fact-Checking Network

(IFCN), said the spread of disinformation and rumours during the pandemic was a global phenomenon, not limited to a certain culture or region, but was rather observed all over the world. Roula Mikhael, executive director of Maharat Foundation, an independent digital platform that focuses on issues of freedom of expression and has a fact-checking unit, said that the development in verification tools and an emphasis on technology have contributed to an incubation of journalists who specialize in auditing — which is necessary to restore public confidence in the news.

In a parallel session, “Writing Effective Grants for Your Project,” three major international media financiers gave advice to independent journalists wishing to obtain grants to implement their stories about the application process and how to win these grants. Jin Ding, Supervisor of Grants and Awards Programs at the International Women’s Media Foundation, highlighted the importance of the applicant being creative in their choice of topic, setting a reasonable and appropriate budget for the size of the story they want to implement, and detailing their plan to publish it. Dustin Renwick, Senior Program Officer for Storytelling Grants at the National Geographic Society, noted common mistakes that applicants make, and advised journalists to be as accurate as possible in their presentation and to move away from vague narratives. Michael Davis, director of the Alexia Foundation that focuses on visual stories, advises journalists to include in their applications a scenic description of the story they want to implement.

On its second day, ARIJ20 hosted a panel on “Opportunities, Challenges and Resources – Eastern Europe and the Middle East”, in collaboration with the Ukranian Journalism Conference. The panel, broadcast live at both conferences, was moderated by the founder of “Innsane”; Tunisian journalist Amal Mekki. Speaking on the panel, Hala Nasreddine advised that foreign journalists looking to work in the region must “know the geographical area that you’re covering and its political and sectarian affiliations”. Dr. Mohamed Sameh from ECRF, highlighted the similarities between Eastern Europe and the MENA region.

GIJN Board Member Oleg Khomenuk spoke on the importance of, and opportunities for, cross-border collaboration, while OCCRP Editor Aubrey Belford, presented examples of cross-border investigations.

In a session moderated by well-known TV anchor Gisele Khoury, entitled “10 Years after the Arab Spring: IJ Future”. Lyas Hallas, Executive Director of Twala in Algeria, spoke from his extensive investigative experience, while Malek Khadhraoui, director of Inkyfada.com in Tunisia, said that the Arab world is witnessing a press revolution in terms of content. Editor Diana Moukalled from Daraj pointed out that the Arab region did not really know investigative journalism until the last 10 years; and the role ARIJ has played in this. She pointed out that the cross-border cooperation between journalists that we are witnessing today mitigates many of the dangers that we are witnessing and that an investigative journalist may be exposed to. Syrian investigative journalist and co-founder of SIRAJ Ali Ibrahim stressed that although the justice system is not entirely impartial in many Arab countries and this affects the impact of investigations; their publication is important for accountability.

The day ended with joy during Fun Night with Samya Ayish, as 200 journalists came in their country’s traditional outfits to participate in fun and educational competitions through applications and digital programs.

The Forum’s closing ceremony will take place on Sunday evening with the announcement of the ARIJ Awards for the best Arab investigations 2020.