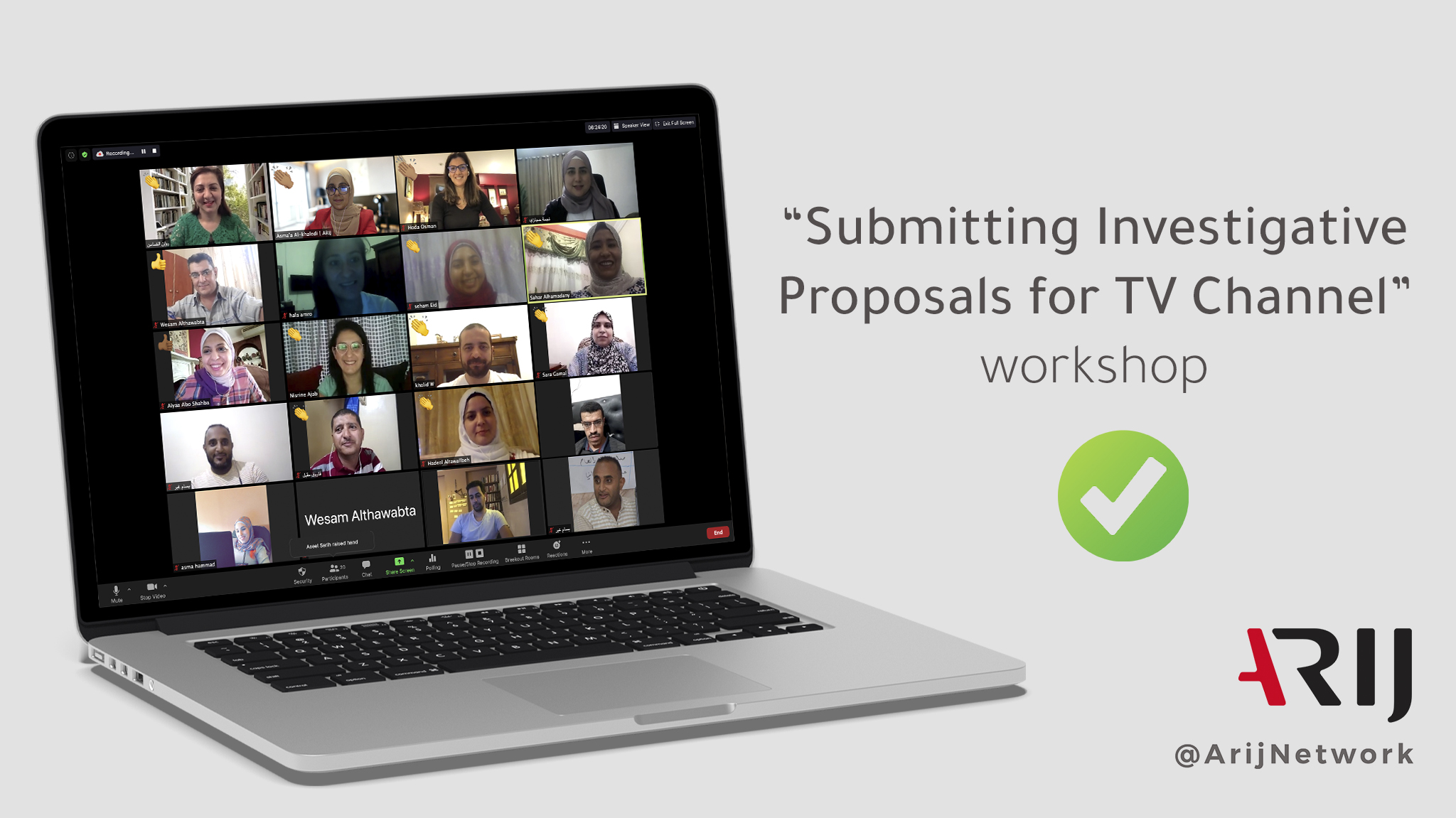 From October 8-10, ARIJ organised a second workshop on submitting investigative proposals to TV channels, through its e-learning platform, the ARIJ Academy.

During the training, ARIJ Director General Rawan Damen, and ARIJ Executive Editor Hoda Osman, trained participants on the best approaches to submitting investigative proposals to TV channels and provided them with valuable advice and tips, in what is the first training of its kind in the Arab world.

Fourteen journalists from five Arab countries participated in the training, and developed their skills in the pre-production preparation of an investigative story; from brainstorming an idea and delivering the proposal, to signing the legal contract and kicking off the production phase with a company, channel or TV network.

Day one focused on transforming written proposals into a visual/audio product suitable for television. This included tips and details on how to write the proposal in the first place, conduct the necessary research, and communicate with the production correspondents whether orally or through writing.

Day two covered the criteria for producing a short promotional video, or teaser, preparing the detailed budget, and orally presenting the investigative piece in multiple forms.

On the third and final day, participants were introduced to the types of editorial and financial negotiations that lead to the legal/binding contract.

The three-day workshop consisted of a number of interactive sessions, during which participants were divided into groups to complete a set of exercises. Additionally, they were assigned daily duties to assess how the training has impacted their skills.

These hands-on assignments culminated in a final exercise on the last day, in the presence of two guests: Naji Al-Tamimi, Producer at the Investigative Journalism Unit at Al-Jazeera, and Imad Mousa, a senior producer at Al-Jazeera English in Washington, DC. Participants presented their 1-3 minute TV investigative proposals to the experts, who gave constructive and inspiring feedback.

Everyone has ideas that are accessible and within reach, and TV channels receive hundreds or even thousands of proposals, only a few of which are accepted and qualified to the production stages. Accordingly, the question that the workshop strived to address is how journalists can make their proposals stand out.

While acknowledging and accepting that rejections are disheartening, one must also recognize that every rejection is a great opportunity to refine our proposals.

TV proposals must encompass the implementation plan, budget and visual material. On top of this, is your verbal presentation of the idea and your approach to covering the story. TV investigative proposals should be straightforward and intriguing, without ambiguity.

Emphasised throughout the workshop was how a story idea’s qualification to the selection committee depends solely on the proposal. The editor, the external production supervisor, and the head of the investigative unit will not hear from you, but their entire impression of you, and your story, will be based on what you wrote. You will not be able to contact him/her personally if your written proposal does not succeed in reflecting you and your story.

The visual material, or trailer, of a proposal will become highly significant in the next five years, and even mandatory. Accordingly, one needs to know how to produce it, and good visual material should reflect three main elements: the story, its style and spirit.