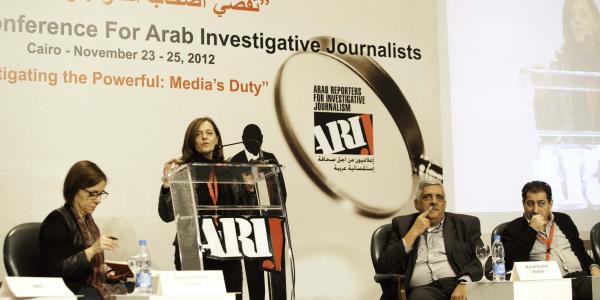 CAIRO, Feb 6, 2013 – An independent evaluation of nine regional media projects funded by DANIDA, the Danish development corporation operating under the Foreign Ministry, has concluded that the Amman-based ARIJ network promoting a culture of investigative journalism across the Arab world, is “by far a success story”.

The team of evaluators, who focused on media projects set up by the Danish-Arab Partnership Program launched a decade ago, ranked Arab Reporters for Investigative Journalism (ARIJ) as the leading project in terms of relevance, efficiency, effectiveness, impact and sustainability.

“ARIJ maybe not have turned into a super model yet, but it is on its way, and it is certainly a success story,” Joachim Raffelberg, member of the evaluation team, told a regional review workshop in Cairo this week.

Rana Sabbagh, ARIJ Executive Director since the program was launched in 2006, said this evaluation provides a push for the network to make sure in-depth reporting — in favor of transparency and accountability — takes root in the region despite legal, political and professional challenges.

“The findings of the evaluation team reflect the personal and professional commitment of the board and staff of ARIJ, and the will of  brave ARIJEAN journalists, editors and media professors to a free and independent media which can assume the role of The Fourth Estate to promote accountability, transparency and justice” she said.

“These professionals have gone out of their way to make this ‘mission impossible’ a success”.

ARIJ was founded by a grant provided by the Danish Parliament and administered by the Copenhagen-based International Media Support (IMS). Other leading donors include the Swedish International Development Cooperation (SIDA), Foundation for Open Society and Norway .

ARIJ has also supported the creation of eight investigative reporting units in regional media to ensure sustainability and is promoting the use of its manual by media professors teaching journalism.