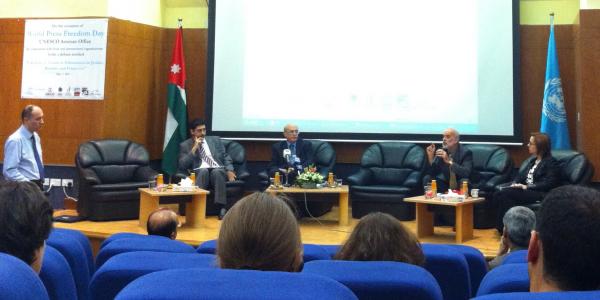 Amman 3 May 2011 – To commemorate the May 3 world press freedom day, UNESCO office in Jordan will host a debate on Tuesday on “Freedom of Access to Information in Jordan: Barriers and Prospects”.

Minister of State for Information and Communication Taher Edwan, journalists, parliamentarians and Jordanian non-governmental organizations will attend the debate, to be held at the United Nations premises in Amman. Jordan is the only Arab country to have legislated a law guaranteeing access to information in 2007.

Journalist Majdoleen Allan will share the outcome of her investigative report on challenges facing Jordanians, including journalists, who file official requests to seek information from ministries and public departments. Her in-depth report was published in Al Arab Al Yawm newspaper end 2010.

Journalist/researcher Walid Hosni will present “Walls of Barriers”, a study he did on access to information, secrecy and disclosure in Jordan. The study was featured in the 2011 Annual Media Press Freedom Report published on Monday by the Center for Defending Freedom of Journalists (CDFJ).

The debate is part of a series of activities marking World Press Freedom Day (May 3) and organized by a group of media organizations and media development initiatives including USAID’s Jordan Media Strengthening Program, the Centre for Defending Freedom of Journalists (CDFJ), the Danish International Media Support (IMS), Arab Reporters for Investigative Journalism (ARIJ), and the social media entrepreneurship group 7iber (“hiber”).

In addition to the panel debate, this year’s celebrations of World Press Freedom Day include a TV, online and outdoor campaign aimed at raising awareness on the importance of media freedoms. A TV spot produced specifically for this occasion will be aired on Jordanian channels and online; outdoor banners displayed at main intersections and bridges around Amman bear different slogans on press freedom. The TV spot pays tribute to all journalists who dedicate their lives to deliver news to the public, no matter what the cost. An online version of the spot is part of a Facebook campaign moderated by 7iber dot com.

Furthermore, a public celebration will be held on May 13 featuring artistic performances by youth in Jordan.

On the occasion of World Press Freedom Day, Ms. Anna Paolini, UNESCO Representative to Jordan stressed that ” World Press Freedom Day is an important day to raise awareness and commitment worldwide to protect the fundamental principles of freedom of expression as enshrined in Article 19 of the Universal Declaration of Human Rights of 1948″. Ms. Paolini assures “promoting freedom of expression and freedom of the press is also done through making governments, parliamentarians and other decision-makers aware of the need to guarantee free expression. UNESCO in Jordan is working jointly with the Government, different partners and civil society institutions to promote such rights and foster access to information and pluralistic media.”

Before the debate, a short video film entitled “The Wall” will be screened. It documents obstacles faced by journalists in their pursuit of information, and reminds governments of the need to respect both their commitment to protecting the basic rights of media practitioners and the right of the public to information.