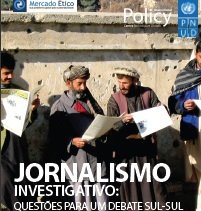 23/03/11 by Renata Johnson
A report released by an agency of the United Nations Development Programme (UNDP) calls for greater cooperation among countries in the global South and says poor governance structures threaten quality investigative journalism in the region. Titled Investigative Journalism: Issues for a South-South Debate, the document was recently published by website Mercado Ético/Ethical Marketsand the UNDP International Policy Centre for Inclusive Growth . The report was based on the 2010 International Workshop on Investigative Journalism: A South-South Dialogue, which gathered journalists, experts, academics, opinion makers and representatives of the United Nations and civil society from South Africa, Brazil, India, Mexico, Switzerland, and Qatar. Without governments that ensure the safety and freedom of journalists, various forms of censorship — political, financial, economic and geographic — prevail, along with market pressure and corruption. Together, these forces frequently prevent journalists from effectively reporting on their societies. One example is the case of journalist Sanjuana Martinez, who wrote three books on pedophilia in the Catholic Church in Mexico. Martinez suffered threats, lost her job and spent years unable to publish her story because of pressure from the local church. “When I did the first series of interviews, there were no problems, but after when I tried to continue the story, I could not anymore,” she explained. Frequently, funds are the main barrier. “Investigative journalism is expensive, time-consuming and often does not generate anything to be published,” said Mauriìcio Hashizume ofNGO Repoìrter Brasil, who has covered slave labor in Brazil. When the pressure to make money prevails, democracy suffers, said Abderrahim Foukara, Al Jazeera Washington bureau chief. “We are under so much pressure to ‘feed the beasts’ 24 hours a day that we lost the necessary tools to reflect on what we reported and its consequences.” He cites poor reporting on weapons of mass destruction in Iraq. The media failed to question their existence, legitimizing the invasion. “We are more concerned with generating revenue than producing information for the people,” he concluded. The report urges investigative reporters and institutions from different countries to work together. “The South-South exchanges must go beyond the markets. We have a heavy flow of business and flow of little experiences of civil society and media,” Hashizume added, pointing that obstacles could be overcome with strategic international partnerships and financial and logistical support of multilateral organizations. The pedophilia story in Mexico would have benefited from such international cooperation. As Martinez recounted, a cardinal sexually abused more than 100 children in Mexico and the U.S., only to move to another country when he was accused of the crimes. For Martinez, it would have been crucial to continue the investigation in the other country. Barriers to investigative journalism also hamper economic growth, a main concern for the Southern Hemisphere. “There is a clear link between journalism and democracy and also between journalism and development,” said Patrice Schneider of the Media Development Loan Fund. To read the report in PDF format (in English or Portuguese), click here. A version of this article first appeared in IJNet’s Portuguese edition.